Several of the world’s most trafficked websites were inaccessible or running unreliably Tuesday morning, with many impacted sites showing 503 errors.

The outage of the websites, which included the UK Government’s own website, a host of newspapers and newsgroups, and online culture sites began a little before 1100 BST (0600 EST) and saw many sites return a 503 Service Unavailable message. Mozilla Web Developer documentation defines a 503 error as indicating “the server is not ready to handle the request. Common causes are a server that is down for maintenance or that is overloaded.”

We are aware of the issues with https://t.co/uLPSBt4jdQ which means that users may not be able to access the site. This is a wider issue affecting a number of other non-government sites. We are investigating this as a matter of urgency.

What has caused the mass outage is not presently known, but Australia’s 9News reports a data network called Fastly may be partly involved. Matt Taylor of the Financial Times, one of the newspapers impacted by the outage, also cites Fastly as having a “massive outage”.

Fastly provides a content delivery network (CDN), which uses server caches in different locations to allow large websites to operate globally at very high speeds. One of the theoretical benefits of a CDN is protection for websites from Distributed Denial of Service (DDOS) attacks, which attempt to overload servers with a flood of requests or traffic.

Fastly is one of only a handful of companies to offer this service, which may go some way to explain why so many websites are impacted. Fastly said on their own status page at 1058 BST that “We’re currently investigating potential impact to performance with our CDN services”, and have posted further updates that the investigation into a “Global CDN Disruption” is continuing regularly since.

Among those large websites impacted are the British government, CNN, the Guardian newspaper, the Financial Times newspaper, the New York Times, and Reddit. Other websites including Amazon and Spotify appear to be accessible but with limited functionality.

Fastly, the CDN provider thought to be at the centre of the global outage say they have identified the issue and have resolved it.

We identified a service configuration that triggered disruptions across our POPs globally and have disabled that configuration. Our global network is coming back online. Continued status is available at https://t.co/RIQWX0LWwl 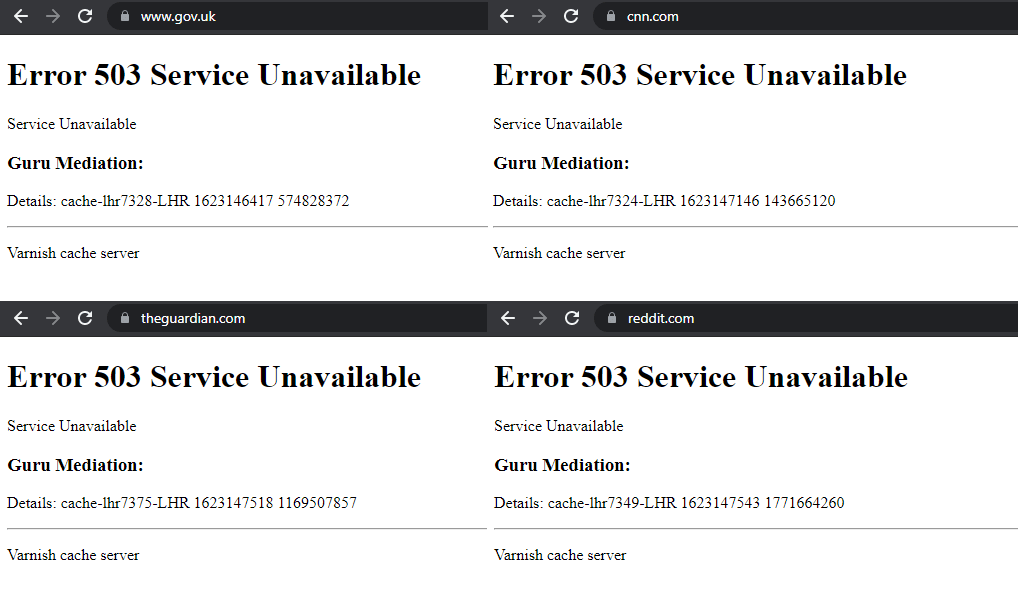