Prince Harry’s eco tourism firm Travalyst announced Thursday it is teaming up with tech giant Google to promote itself to the world.

Travalyst said it wants the “broadest industry alignment possible” for sustainable international travel, with Google representing a “significant step forward in that mission.”

This is not the first time Harry’s pet travel project has teamed up with the Silicon Valley behemoth.

A barefoot Duke of Sussex stood before an elite audience of business leaders and celebrities gathered at Google’s annual deluxe retreat in Sicily back in August, 2019 to warn immediate action is needed to avoid an approaching climate catastrophe.

According to Italian press reports that covered the Google event, the attendees showed up in 114 private jets.

One report found some 114 flights from Los Angeles to Palermo, Italy, where guests landed, would spew an estimated 100,000 kilograms of CO2 into the air.

As Breitbart News reported, a few weeks later the British Royal flew to Amsterdam to caution holidaymakers and tourism chiefs about the damage being done to the environment by frequent flyers.

He urged them to fly less and travel in a more sustainable, caring manner.

Prince Harry Makes Climate Plea: ‘What If Every One of Us Was a Raindrop?’ https://t.co/fy5Q2mCmCc

In launching Travalyst, Harry did acknowledge his own love of flying by private jet, observing his Royal status meant “Occasionally, there needs to be an opportunity based on a unique circumstance to ensure that my family are safe, it’s genuinely as simple as that.

“If I have to do that – and it’s not a decision I would want to take – I would ensure, as I have done previously and I will continue to make sure I do, is balance. I have always offset my CO2.”

Other parners in the Travalyst scheme include Booking.com, Tripadvisor, Visa, and Skyscanner, with Google the newest additon to the growing list of corporate giants falling in behind the Queen’s grandson. 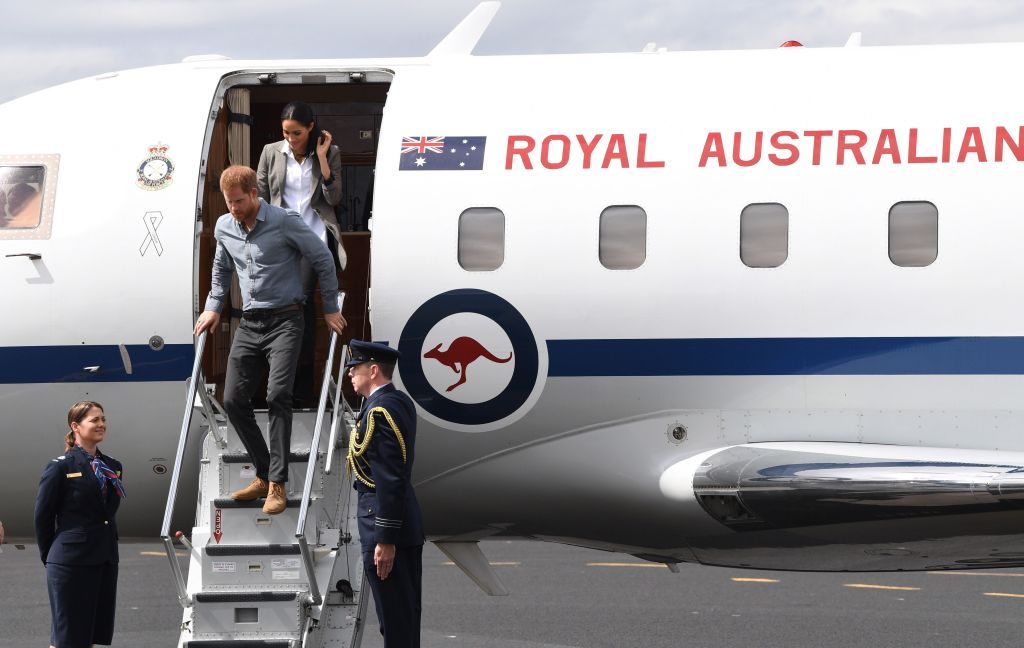 Just the two of them: Britain’s Prince Harry and his wife Meghan disembark from their VIP Australian military transport on arrival in Dubbo on October 17, 2018. (DEAN LEWINS/AFP via Getty Images)

“We’re excited to continue this endeavour with Google as a member of the Travalyst Coalition, delivering on this unique opportunity to build positive, transformative change in travel.”

The Duke of Sussex has previously slammed U.S. technology giants as “incredibly powerful and consolidated gatekeepers” and criticised disinformation being spread on social media about issues like climate change, the Daily Mail reports.