Tyson Fury put a decisive end to his three-bout trilogy with American knockout artist Deontay Wilder with a devastating stoppage of his own, in what has been hailed as one of the greatest heavyweight contests of all time.

The Brexit-backing British boxer’s first bout with Wilder, then then-WBC heavyweight champion, ended in a controversial split draw, with most pundits believing Fury had comfortably outboxed the American despite suffering an 11th-hour knockdown that appeared to be fight-ending before a sudden and dramatic recovery.

‘The Gypsy King’ opted not to leave the outcome of his second bout with the ‘Bronze Bomber’ in the hands of the judges, adopting a much more aggressive strategy and dropping his rival twice in a contest that became so lopsided that Wilder’s corner threw in the towel in the seventh round.

The pair’s final bout on October 9th was by far their most compelling, with Wilder having packed on more size than in any of his previous bouts to better measure up to the 6’9″ Briton, who also stepped into the ring at a career-high of 273 lbs.

All those jabs in the rounds leading up to the KO made a huge difference, an accumulation of punches turns the big one into the final one. Otherworldly stamina and condition from Fury for such a big man, what a fighter #FuryWilder3 pic.twitter.com/7PWbQay8ZH

This angle of the Fury KO of Wilder is 🔥 #FuryWilder3

Wilder, considered more puncher than boxer by most commentators, appeared to have worked on his ringcraft for his third and likely final contest with the more technical Fury, making an effort to try and hold the centre of the ring and work the body of the bigger man in the early rounds after being kept on the back foot for much of their previous contest.

Fury nevertheless appeared to have gained the upper hand by the third round, flooring Wilder with a right hand — but the American came back in the fourth to put Fury on the canvas himself not once but twice, bringing the Las Vegas crowd to their feet in anticipation of an upset.

The chances of the 3-1 underdog beating the odds began to fade after Fury survived to the fifth, however, with the Briton gradually imposing his will on Wilder and again bringing him to his knees with a clubbing right hand in round ten.

Wilder survived to the eleventh but looked exhausted as Fury closed in, battering him along the ropes before dropping him face-down with another thunderous right to end their battle.

Fury credited his comeback after the knockdowns in the fourth to “my Lord and saviour, Jesus Christ.”

“In the mighty name of Jesus I won this fight tonight again. I give Him the glory, He gives me the victory. He made me legs strong; I was down a couple of times, I was hurt. Wilder’s a strong puncher and he’s a tough man. I was hitting him with some big shots. My Lord and saviour rose me to my feet tonight to give Him the glory,” the champion said. 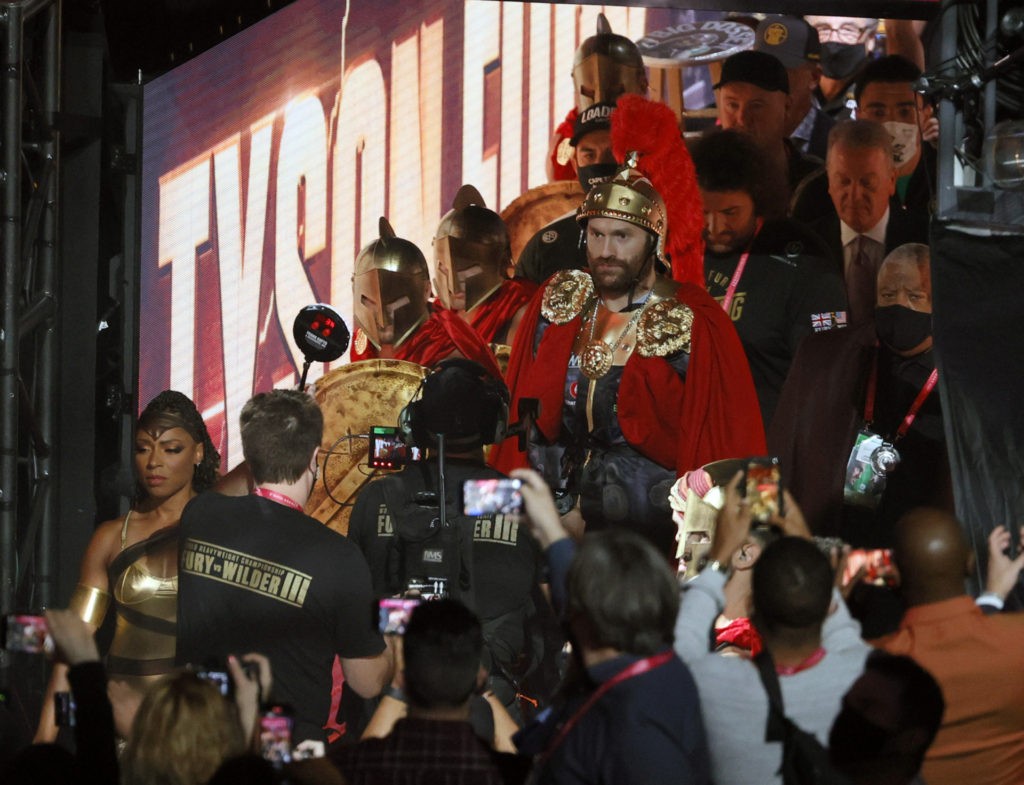 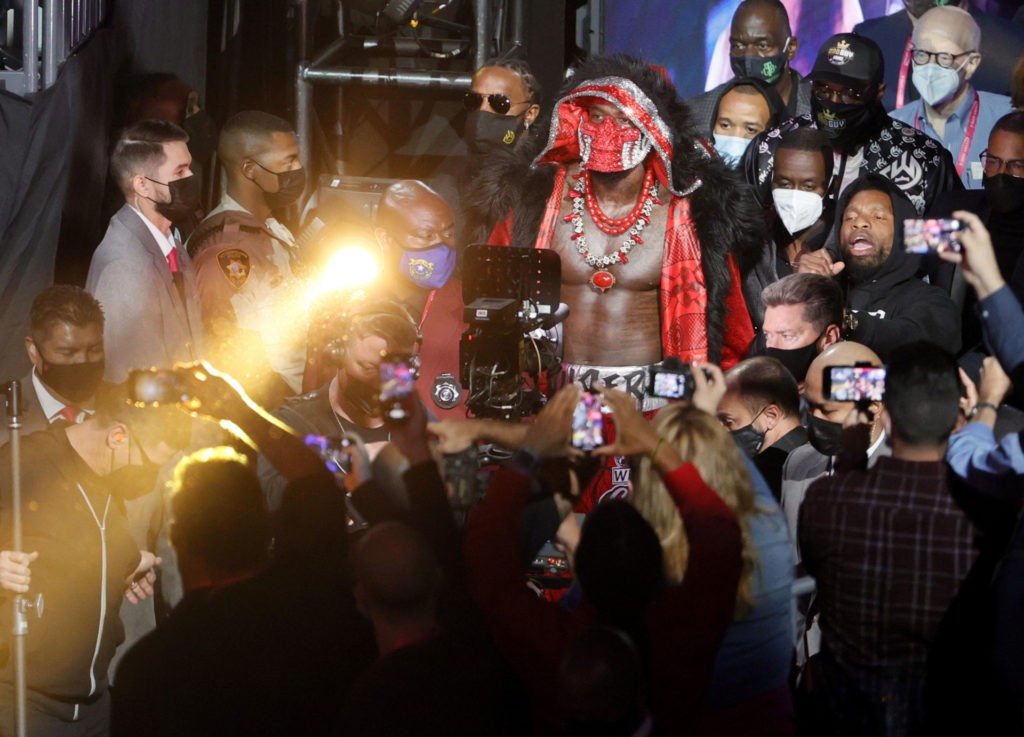 While Fury gave credit to Wilder as “a top fighter” who “gave me a run for my money” in the aftermath of the bout, adding that “I always say I am the best fighter in the world and he is the second-best,” the acrimony between the two persisted — due chiefly, according to Tyson, to the American’s refusal put the capstone on “a great fight, worthy of the best trilogies” in a sportsmanlike fashion.

Asked what words he had exchanged with Wilder once the fight was over, Fury recounted that “I just said ‘well done’ and he said ‘I don’t want to show any sportsmanship or respect’.”

“Sore loser. An idiot,” the Brit concluded, adding that he would be praying for his defeated foe “so God will soften his heart.”

There appeared to be some real heat in the rivalry between Fury, who urged British prime minister Boris Johnson to “grow a pair” and come down hard on Black Lives Matter rioters vandalising statues in 2020, and Wilder, an outspoken BLM supporter who accused the Briton of cheating in the run-up to their final bout.

Wilder had also clashed with Fury, as a socially conservative Christian, over the former’s belief that his ‘Bronze Bomber’ alter ego could be a kind of Nigerian spirit working through him. 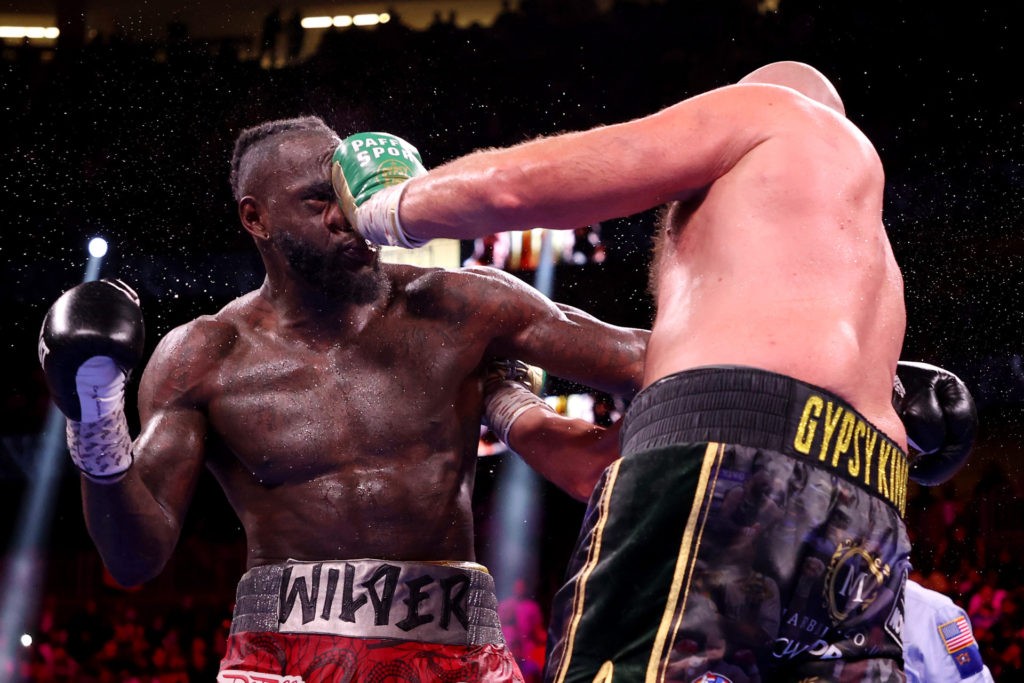 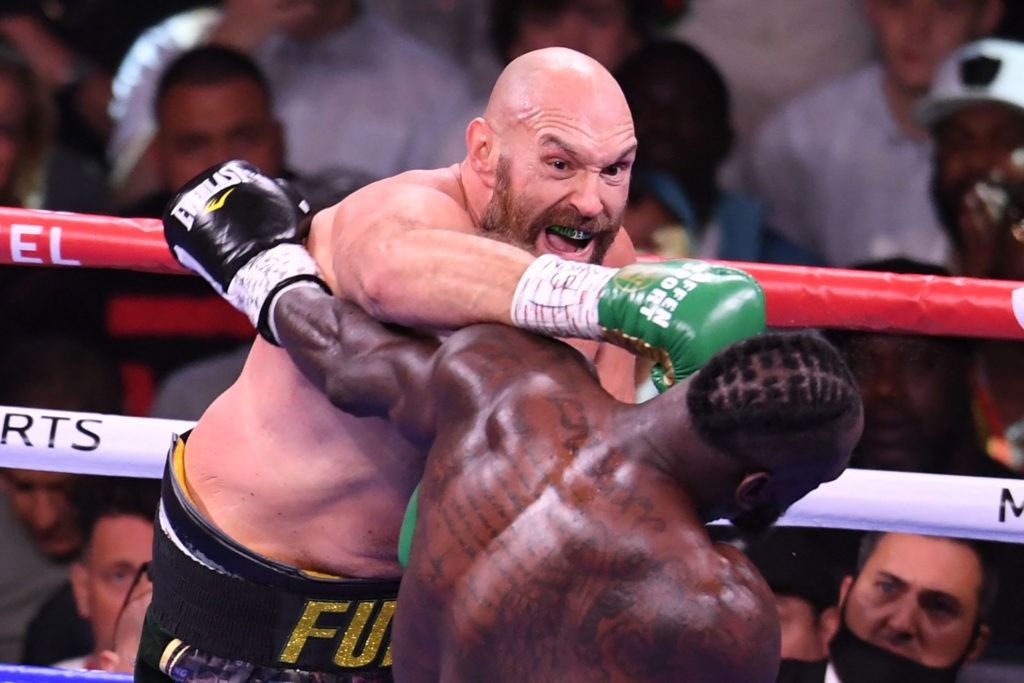 WBC heavyweight champion Tyson Fury of Great Britain (L) lands a punch on US challenger Deontay Wilder (R) in the third round fight for the WBC/Lineal Heavyweight title at the T-Mobile Arena in Las Vegas, Nevada, October 9, 2021. (Photo by Robyn Beck / AFP) (Photo by ROBYN BECK/AFP via Getty Images) 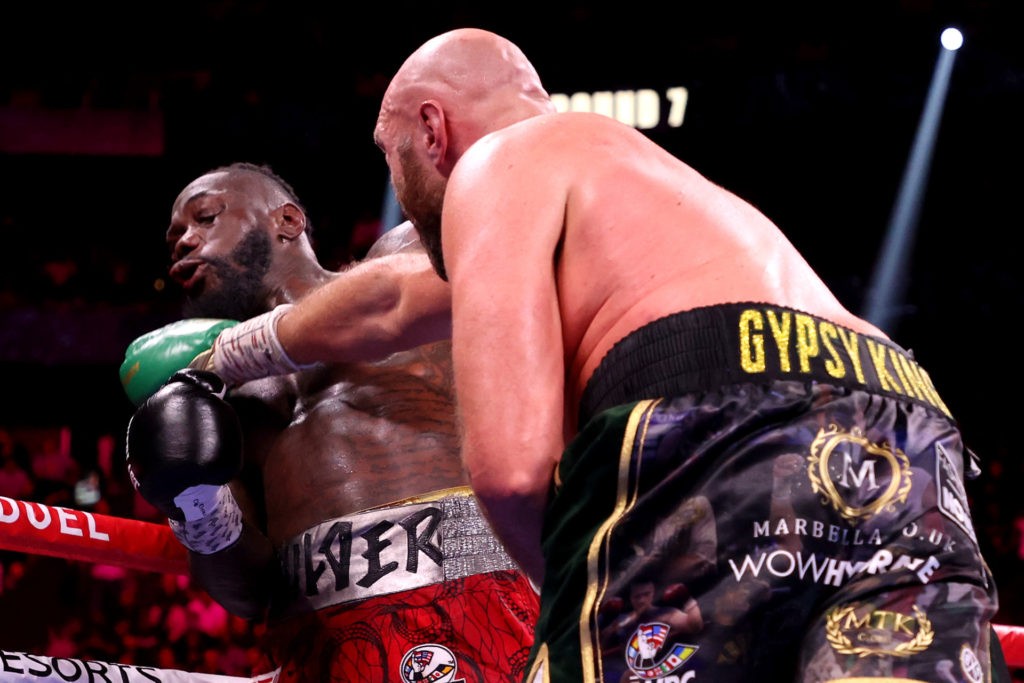 Fury’s next move as ruler of the heavyweight division is unclear.

For years now, an all-British match-up for the undisputed championship between the Gypsy King and Anthony Joshua, who had gathered up the WBA (Super), IBF, WBO, and IBO heavyweight belts, had been hotly anticipated — but that bout has likely been derailed by Ukrainian cruiserweight great Oleksandr Usyk, who stepped up a weight class and battered Joshua over 12 rounds en route to a one-sided decision victory in September.

Usyk is a less tantalising prospect for Fury’s team in terms of name value, and in any case the Ukrainian is expected to have to run back his contest with Joshua under a contractual rematch clause. 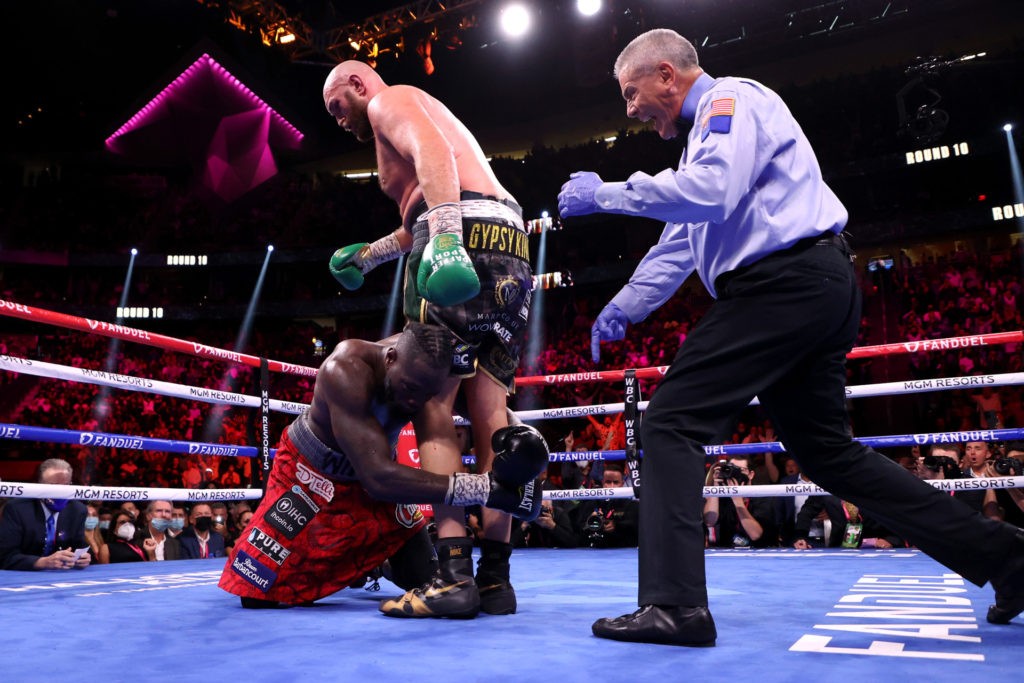 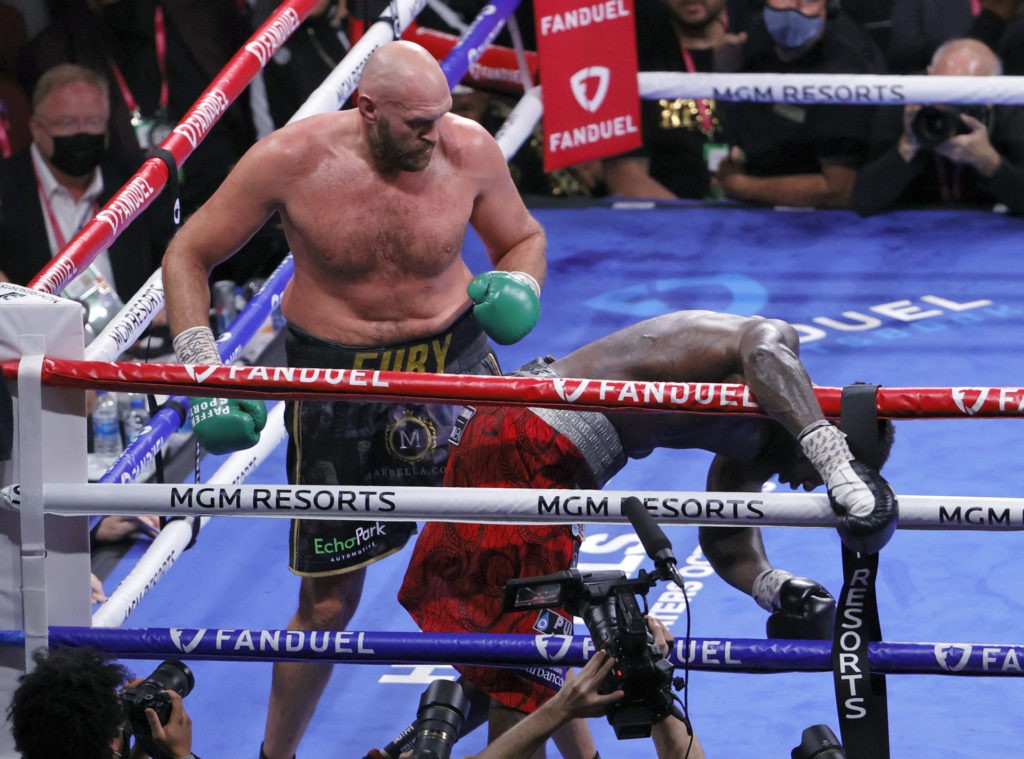 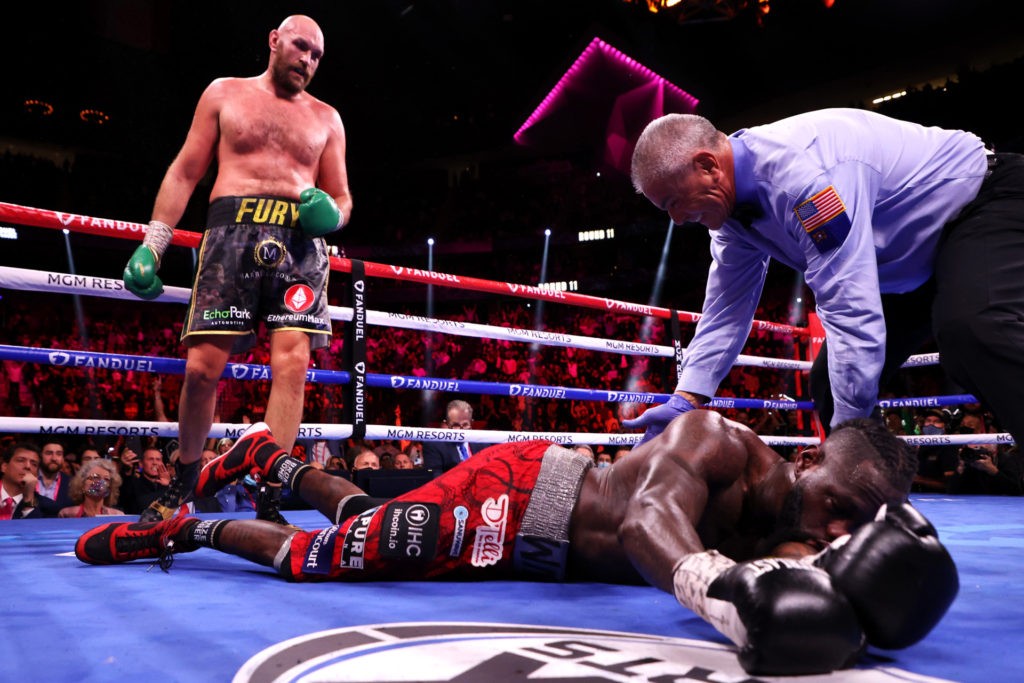