BERLIN (AP) – Berlin’s police chief apologized on Monday for an incident in which officers were pictured practising push-ups on a part of the German capital’s memorial to the 6 million Jews killed in the Nazi Holocaust.

Pictures published by Berlin’s B.Z. tabloid showed uniformed policemen leaning on one of the slabs that makes up the Holocaust memorial to practice push-ups. The newspaper said they were stills from a video apparently taken by the officers themselves on a cellphone during a holiday weekend in May when they were deployed to the area because of demonstrations.

The memorial, a field of 2,700 grey concrete slabs near the Brandenburg Gate that opened in 2005, is open around the clock and isn’t surrounded by any barriers. Visitors are supposed to refrain from activities such as running and jumping from one slab to another.

“The colleagues’ behaviour disrespects what this memorial stands for and also offends the memory of those who were murdered,” Slowik said.

The GdP union, which represents police officers, also apologized and condemned the “tastelessness” of the officers’ actions, adding that there must be “consequences” for those involved. “The Holocaust memorial is not an adventure playground,” it said. 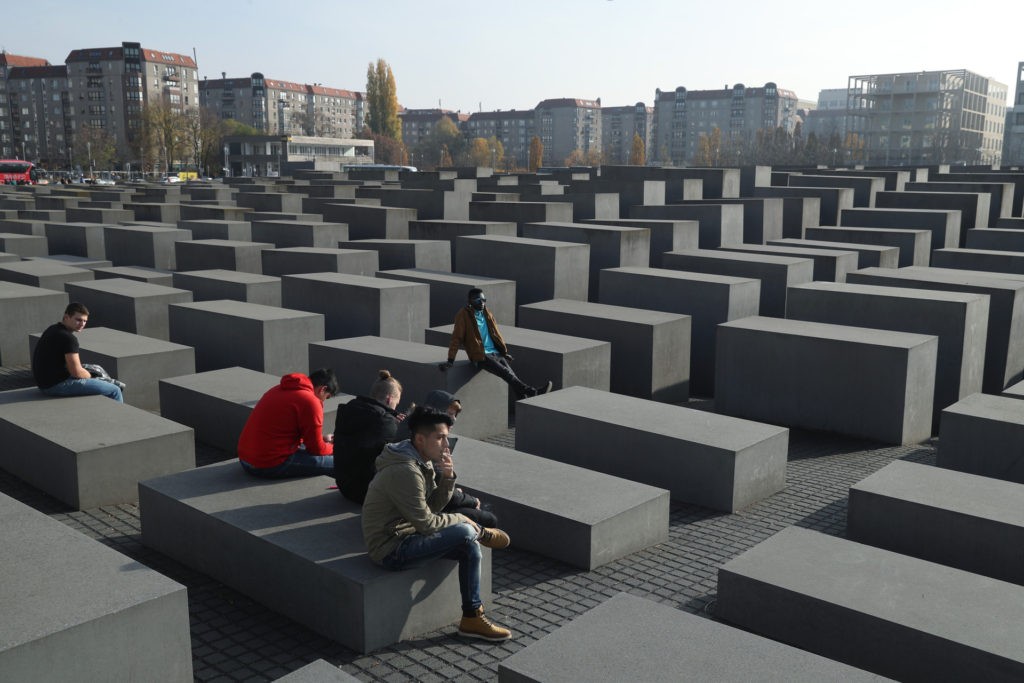 BERLIN, GERMANY – NOVEMBER 07: Visitors sit on stellae at the Monument to the Murdered Jews of Europe, also called the Holocaust Memorial, prior to the 80th anniversary of the Kristallnacht pogroms on November 7, 2018 in Berlin, Germany. During November 7-13, 1938, Nazi supporters attacked over 1,400 synagogues as well as Jewish businesses and individuals that led to the deaths of over 400 people in a violent outburst of anti-semitism that preceded the horrors of the Holocaust. Germany will officially commemorate the 80th anniversary on November 9. (Photo by Sean Gallup/Getty Images)