Video has emerged purporting to show a police dog mauling a man at an anti-lockdown protest in Amsterdam.

The footage, which was published on social media by an account called Guerrilla Reporters, appears to have been filmed during an anti-lockdown protest held in the Dutch capital on Sunday. In the video, a police dog is seen apparently biting a man’s arm as other officers used batons against the surrounding demonstrators.

At the time of this reporting, the local police have not confirmed the veracity of the video, however, a report from the public broadcaster Nederlandse Omroep Stichting (NOS) features an image appearing to show the same man being bitten by a police dog, with a caption that reads “the police have used dogs”.

Pictures that were published by the Getty Images photography service also appear to show the same instance of the police dog attack.

Thousands of Dutch citizens and protesters from across Europe gathered in the city on Sunday, despite the protest being banned by authorities on Thursday, according to the local newspaper De Telegraaf.

While police claimed that there were strong indications that groups with a propensity for violence were likely to be present during the protest, Michel Reijinga, the leader of Samen voor Nederland,  — which seemingly helped organise the event — stated that such a claim was “complete nonsense” and that rioters are never welcome at the group’s demonstrations.

The Dutch paper also reported that protesters were asked to leave the Museumplein (Museum Square) — a central public space in Amsterdam — by police on Sunday, who closed off the location’s exits.

The publication De Volkskrant noted that the Museumplein was been designated a “safety risk area” on Sunday from 11 am to 11 pm, giving police the power to preemptively search anyone in the area during those times. 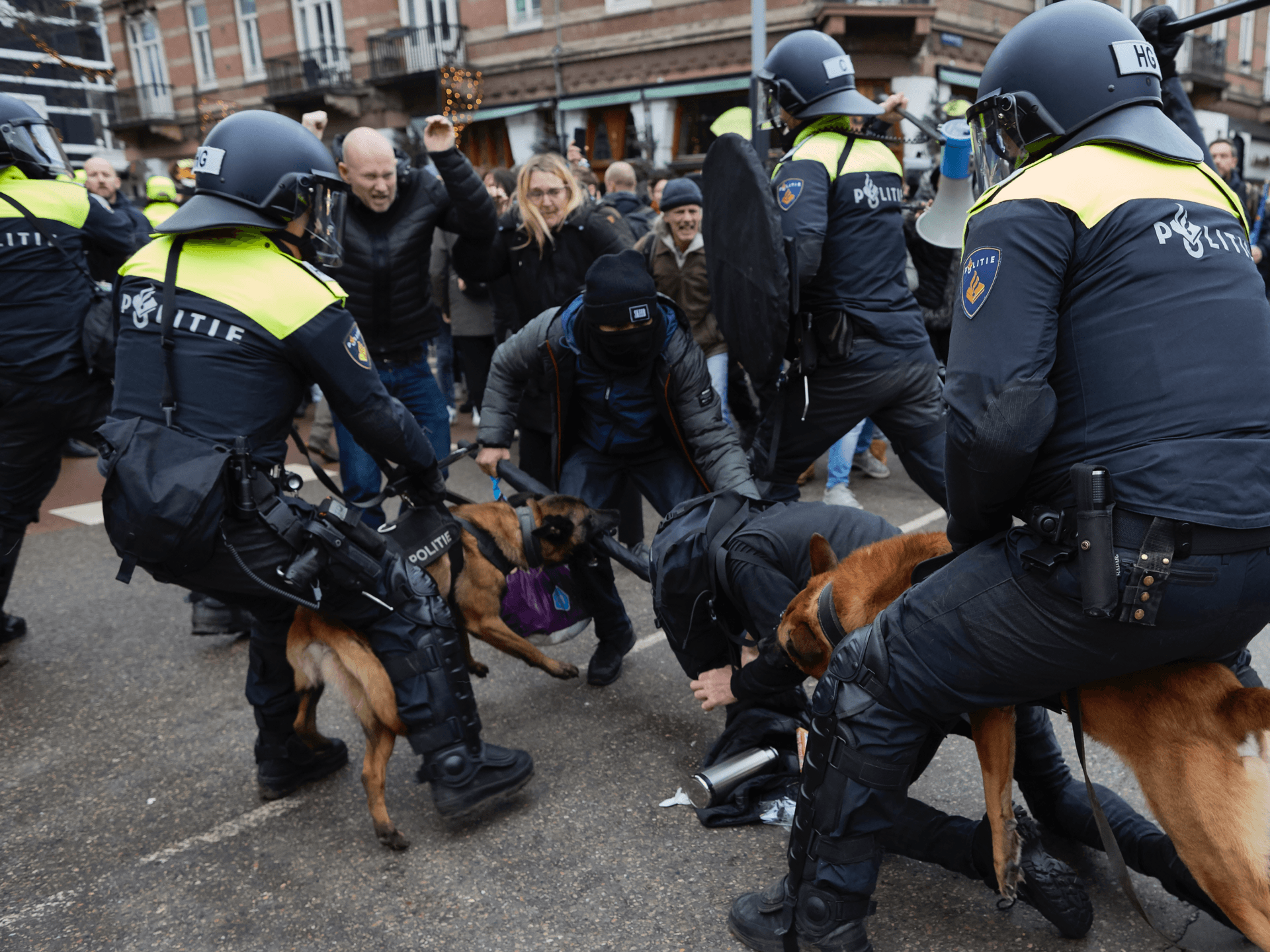 AMSTERDAM, NETHERLANDS – JANUARY 02: Clashes erupt between police anti-riot officers and antivaxxers affiliated to far-right parties near Museumplein on January 2, 2022 in Amsterdam, Netherlands. With riot police expected to be on strike, authorities hav banned the Covid-19 lockdown protest in the Dutch capital. The postponed police protest is part of a series of strikes by police union members to draw attention to police capacity problems and conditions of work. (Photo by Pierre Crom/Getty Images)

The Netherlands is currently under severe lockdown measures, with all non-essential shops being forced to close, along with bars, restaurants, theatres, and cinemas.

Prime Minister Mark Rutte also told the Dutch elderly that there would be “no cuddling the grandkids” over the holidays, having cancelled Christmas through the use of tough restrictions.

Despite the rolling lockdowns, the country’s royals have been caught breaching measures, with news emerging that the family held a lockdown-breaking birthday bash for the crown princess.

While a government agency claimed that 21 people were invited to the party at a time where only a maximum of four people could visit a person’s home, other sources have claimed that around 100 individuals in total may have attended the event.