BRUSSELS (AP) – The Russian airstrike on a children’s and maternity hospital in the Ukrainian port city of Mariupol is the latest in a series of attacks that have gutted apartment buildings and killed people in their homes or simply going about their business.

Allegations of war crimes, impossible yet to prove, are mounting and an investigation is underway at the International Criminal Court. Russia’s willingness to use overwhelming force — aerial bombardment and artillery in civilian areas — is already drawing comparisons with its attacks in Chechnya and Syria.

But any similarity with the destruction visited on the Chechen capital of Grozny, or Aleppo in northern Syria, is premature, for now. The invasion is only in its third week, and military analysts say that while Russia has expanded its use of airpower, its forces are still not pressing their aerial advantage to the full.

In the wake of Thursday’s airstrike in Mariupol — at least three people, including a child, were killed — Ukrainian president Volodymyr Zelensky wondered: “What kind of country is this, the Russian Federation, which is afraid of hospitals, afraid of maternity hospitals, and destroys them?”

Russian Foreign Minister Sergey Lavrov dismissed this as “pathetic shrieks” from the enemy.

FM Sergey #Lavrov: 3 days ago, on March 7, during the UNSC Meeting the @RussiaUN presented facts that the maternity hospital had long been captured by the Azov battalion and other radicals.#Think4Yourself 👇https://t.co/qw47OUKsEq pic.twitter.com/SWgIGUURMq

It was the shrieks of bombs and shells raining down during two wars from 1994 to 2000 that flattened Grozny. In early December 1999, Russian planes dropped flyers on the Chechen capital with a simple ultimatum to rebel fighters and civilians holed up in the battered city: Leave or be destroyed.

Russian forces had entered the breakaway republic in September that year after Chechen rebel fighters moved into neighbouring Dagestan. The militants were also blamed for apartment bombings in Russian cities that left 300 people dead. 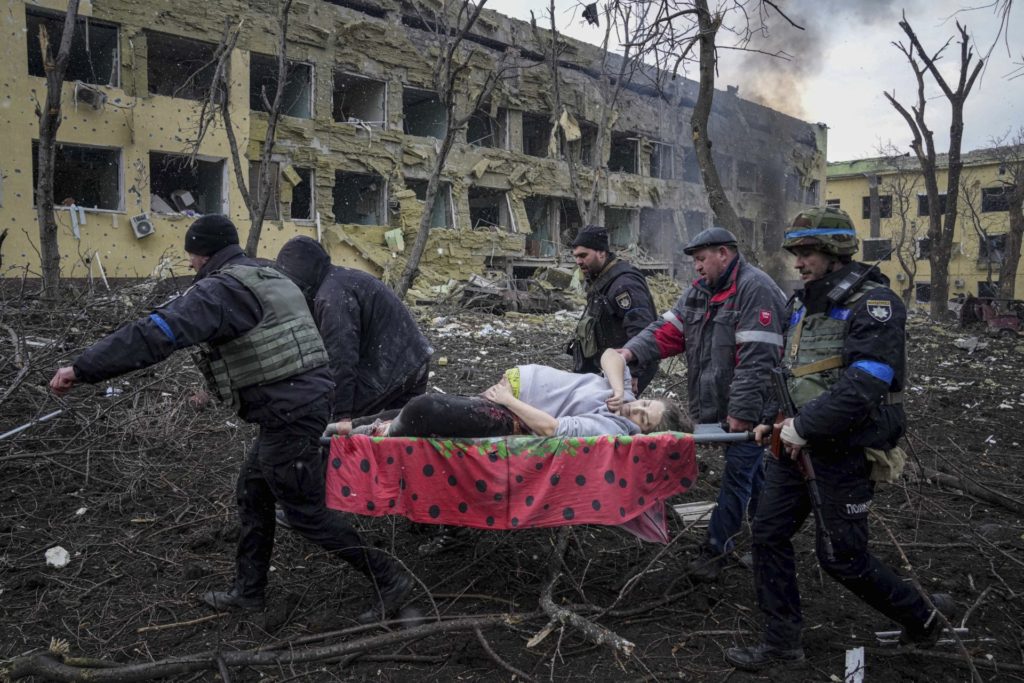 FILE – Ukrainian emergency employees and volunteers carry an injured pregnant woman from the damaged by shelling maternity hospital in Mariupol, Ukraine, March 9th, 2022. The Russian airstrike on a children’s and maternity hospital in the Ukrainian port city of Mariupol is the latest in a series of attacks that has gutted apartment blocks and killed people in their homes or simply going about their business. (AP Photo/Evgeniy Maloletka, File)

Grozny was bombed and shelled for weeks to dislodge entrenched rebels. Moscow’s initial upbeat forecasts of quick victory — echoing its predictions for the rapid surrender of Ukraine — were revised as commanders realized they faced a longer, harsher war.

Airpower was the weapon of choice. The Russian army baulked at storming Grozny for fear that street battles would deliver the kind of heavy casualties that its troops suffered in the city in the 1994-96 war. 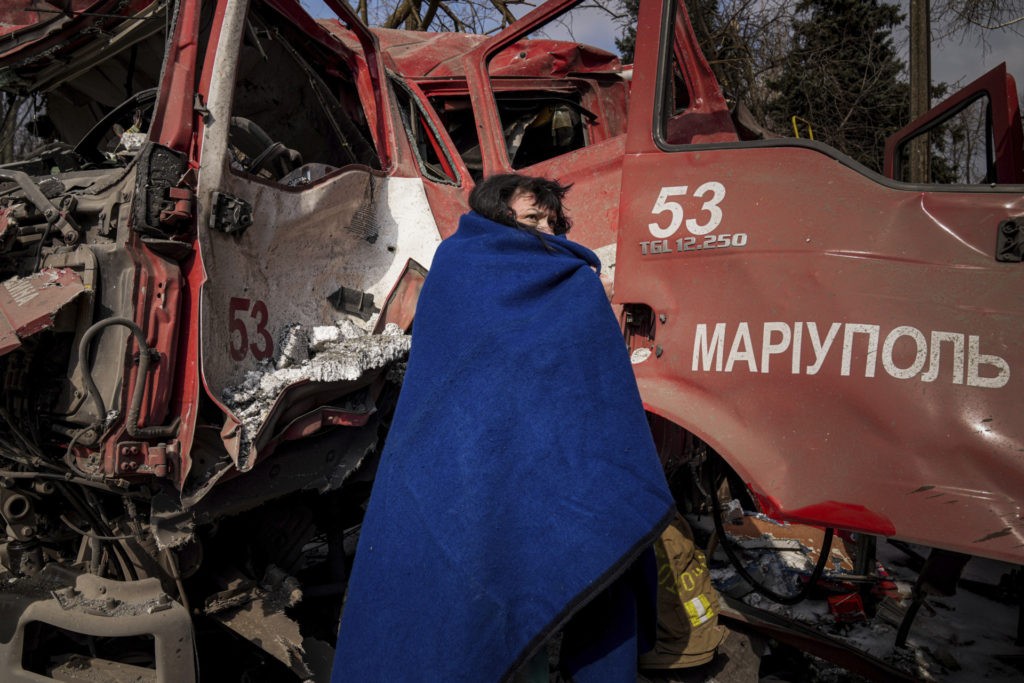 A woman covers herself with a blanket near a damaged fire truck after shelling in Mariupol, Ukraine, Thursday, March 10th, 2022. (AP Photo/Evgeniy Maloletka)

In January this year, as the Kremlin’s forces closed in on Ukraine’s borders, British prime minister Boris Johnson warned the Russian people that invading would be “a painful, violent and bloody business,” with heavy street fighting of the same kind, and that they risk seeing “a new Chechnya.”

In 2016, after punishing aerial bombardments by Russian and Syrian planes and years of street fighting, the staggering extent of the damage to the city of Aleppo began to emerge. Tens of thousands of homes left uninhabitable, most factories looted or destroyed, and ancient landmarks reduced to rubble.

Experts said the cost of rebuilding would run into tens of billions of dollars and take years. The city had once been an industrial hub, home to factories producing textiles, plastics and pharmaceuticals. Its ancient centre was a World Heritage site that drew hordes of tourists. 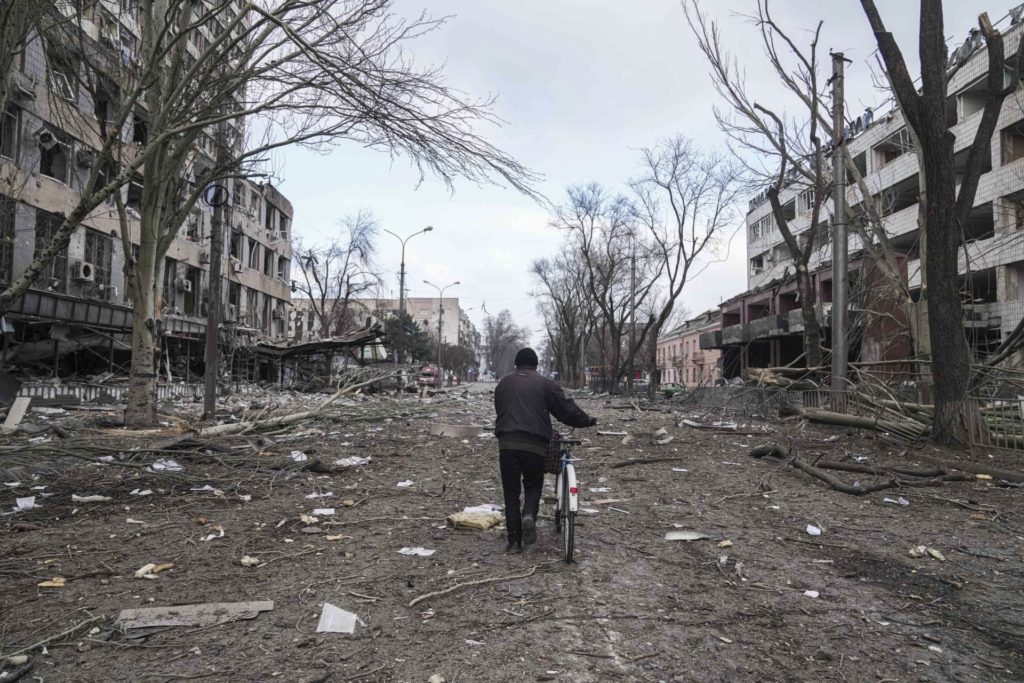 A man walks with a bicycle in a street damaged by shelling in Mariupol, Ukraine, Thursday, March 10, 2022. (AP Photo/Evgeniy Maloletka)

Russia is not the only country to use disproportionate force when its military aims are frustrated, with the U.S. facing heavy criticism for indiscriminate attacks in Vietnam, Iraq, and Afghanistan.

Aleppo “resembles those cities that were stricken during World War II,” Maamoun Abdul-Karim, head of the government’s museums and archaeology department, said in late 2016. The scale of devastation evoked comparisons to Grozny, or the British World War II firebombing of the German city of Dresden.

The damage to Aleppo and Grozny was inflicted by Russian warplanes over years. It was relentless; a tactic to avoid being sucked into street fighting and to limit troop casualties. Russia’s war on Ukraine has barely begun. The prospect of close-quarters street fighting, should it come to that, lies ahead.

“This may end up looking like something out of the Middle Ages in terms of cities being besieged and bombarded … with extraordinary misery, very brutal tactics, indiscriminate shelling by the Russians,” Douglas Lute, a former U.S. Ambassador to NATO, told the Associated Press. 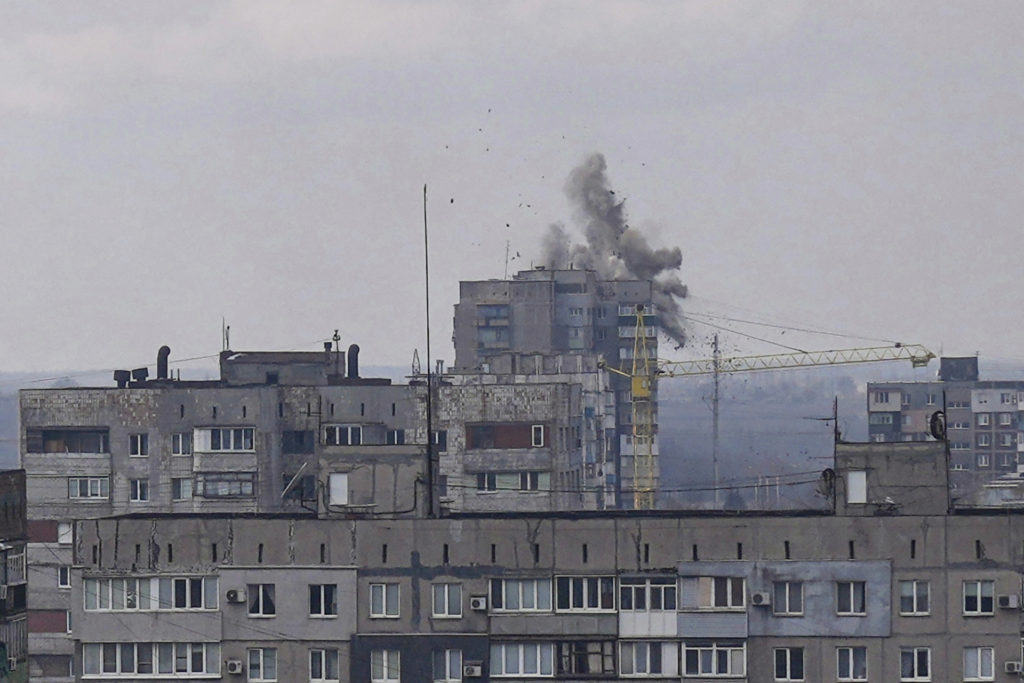 Nathan Ellgren contributed to this report from Washington