The Hagia Sophia in Istanbul, formerly Constantinople, held its first Ramadan prayers in 88 years on Friday to mark the start of the Islamic month of fasting, after being converted into a mosque in 2020.

The Hagia Sophia Grand Mosque — once the Church of the Holy Wisdom, before the Turks’ violent conquest of its city — held its first tarawih prayer since 1934, when the cathedral-turned-mosque was converted into a museum by the secularising government of Kemal Atatürk.

Turkey’s President Recept Tayyip Erdogan had converted the Hagia Sophia into a mosque in 2020 despite protests from local Christians and many abroad — although Erdogan achieved his conversion of the iconic house of worship with less accompanying destruction than Mehmet II in 1453, at least:

The conquering sultan, Mehmet II, personally oversaw the conversion of Hagia Sophia. Crosses were demolished and exchanged for crescents, altars and bells were destroyed, icons were burned or hacked to pieces, mosaics and frescoes depicting Christian imagery were plastered over, and most of the cathedral’s priests were killed or enslaved. In time, four colossal minarets were erected to surround Hagia Sophia, producing the iconic image that has come to be globally associated with Ottoman Constantinople and Turkish Istanbul.

Due to the Wuhan virus pandemic, Ramadan prayers did not take place in the Hagia Sophia in 2021, according to a report from the Andalou news agency.

According to the Turkish outlet, due to a number of factors including high vaccination rates and relatively low numbers of cases and deaths, the government decided to allow Muslims to attend the Hagia Sophia to mark the start of Ramadan and prayers will be held throughout the month.

Orthodox Christians, for whom the Hagia Sophia was their grandest cathedral prior to the Ottoman conquest, were particularly outraged over its 2020 conversion.

In September of that year, for example, the Greek Orthodox Church of the United States petitioned the United Nations to force the Turkish government to protect the Christian heritage of the cathedral.

“By unilaterally changing the status, structure and name of these UNESCO sites, with particular significance to Orthodox Christians, Turkey is in violation of its obligations under international law to preserve cultural heritage and to respect the political, cultural and religious freedoms of Orthodox Christians in Turkey and abroad,” Archdiocese of America counsel Christina Hioureas warned.

In neighbouring Greece, polls showed that a majority of Greeks were unhappy with the weak international response to the conversion, with 87 per cent saying they were disappointed in the reaction of the European Union, in particular. 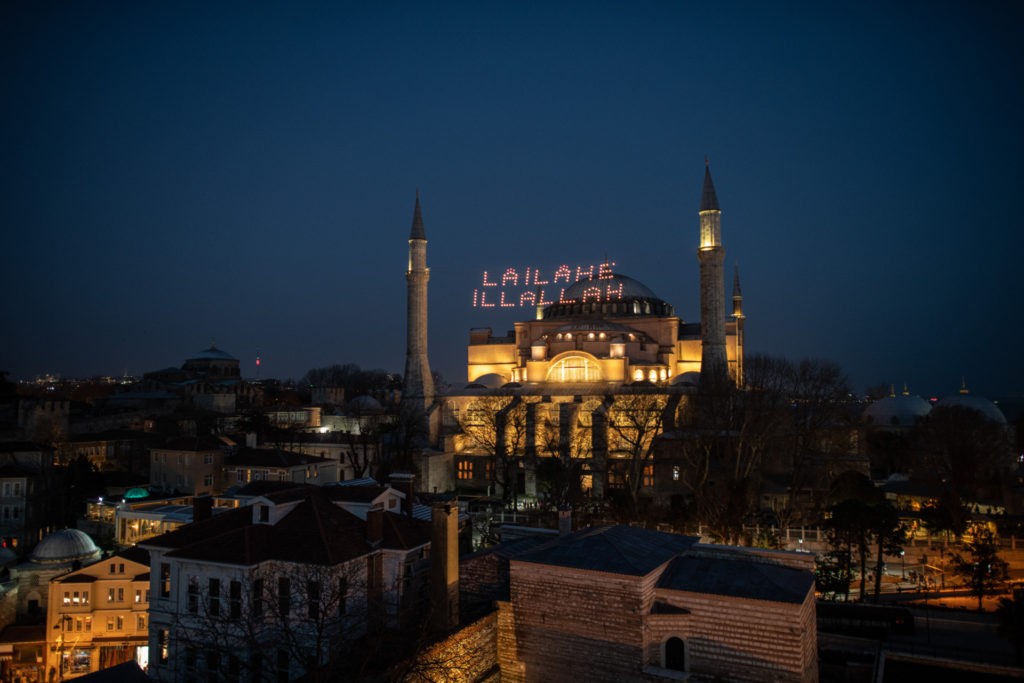 A Ramadan banner seen hanging from the minarets of Hagia Sophia Grand Mosque reads in Turkish “There are no other gods, only Allah” ahead of the start of the holy month of Ramadan on April 1st, 2022 in Istanbul, Turkey. “Tarawih” prayers (evening prayers during the holy month of Ramadan) are returning to Istanbul’s Hagia Sophia mosque for the first time in 88 years. (Photo: Burak Kara/Getty Images)