KYIV, Ukraine (AP) – Russian troops are withdrawing from around Ukraine’s second-largest city after bombarding it for weeks, the Ukrainian military said Saturday, as Kyiv and Moscow’s forces engaged in a grinding battle for the country’s eastern industrial heartland.

Ukraine’s general staff said the Russians were pulling back from the northeastern city of Kharkiv (Kharkov) and focusing on guarding supply routes, while launching mortar, artillery and airstrikes in the eastern Donetsk province in order to “deplete Ukrainian forces and destroy fortifications.” 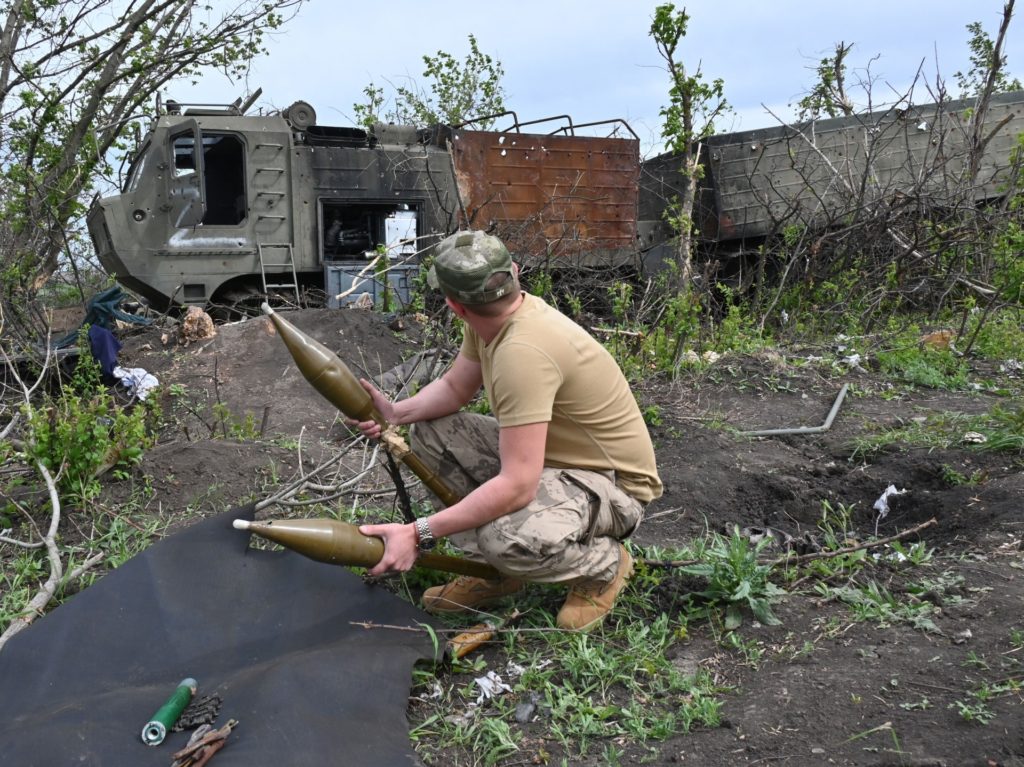 A Ukrainian serviceman inspects abandoned munitions next to a destroyed Russian military vehicle near the village of Mala Rogan east of Kharkiv, on May 13, 2022, amid the Russian invasion of Ukraine. (Photo by SERGEY BOBOK/AFP via Getty Images)

President Volodymyr Zelensky said Ukrainians were doing their “maximum” to drive out the invaders and that the outcome of the war would depend on support from Europe and other allies.

“No one today can predict how long this war will last,” Zelensky said in his nightly video address late Friday.

In a show of support, a U.S. Senate delegation led by Republican leader Mitch McConnell met with the Ukrainian president Saturday in Kyiv. A video posted on Zelensky’s Telegram account showed McConnell, who represents the state of Kentucky, and fellow Republican senators Susan Collins of Maine, John Barrasso of Wyoming and John Cornyn of Texas greeting him.

Their trip came after Kentucky’s other senator, Rand Paul, blocked until next week the Senate’s approval of an additional $40 billion to help Ukraine and its allies withstand Russia’s three-month old invasion. 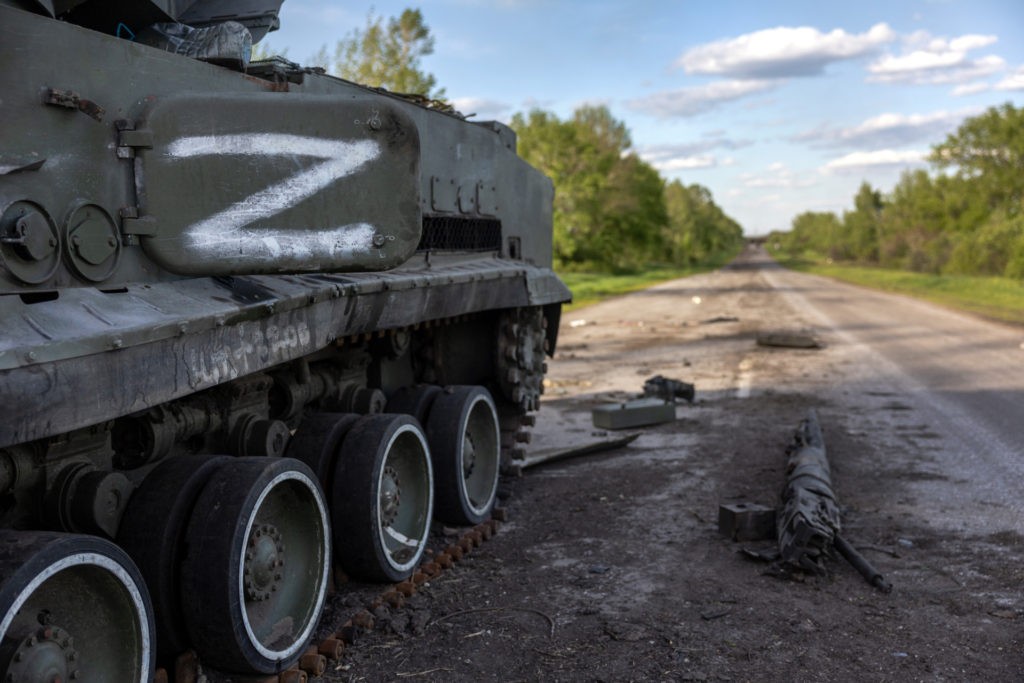 KHARKIV, UKRAINE – MAY 13: A destroyed Russian armoured vehicle pictured on May 13, 2022 on the northern outskirts of Kharkiv, Ukraine. Ukrainian and Western officials say Russia is withdrawing forces around Kharkiv, Ukraine’s second-largest city, suggesting it may redirect troops to Ukraine’s southeast. (Photo by John Moore/Getty Images)

After Russian forces failed to capture Kyiv following the Feb. 24 invasion, President Vladimir Putin shifted his focus eastward to the Donbas, an industrial region where Ukrainian troops have battled Moscow-backed separatists since 2014.

Russia’s offensive aims to encircle Ukraine’s most experienced and best-equipped troops, who are based in the east, and to seize parts of the Donbas that remain in Ukraine’s control.

Airstrikes and artillery barrages make it extremely dangerous for reporters to move around in the east, hindering efforts to get a full picture of the direction the fighting is taking. But the battle appears to be a back-and-forth slog with no major breakthroughs on either side.

Russia has captured some Donbas villages and towns, including Rubizhne, a city with a prewar population of around 55,000. 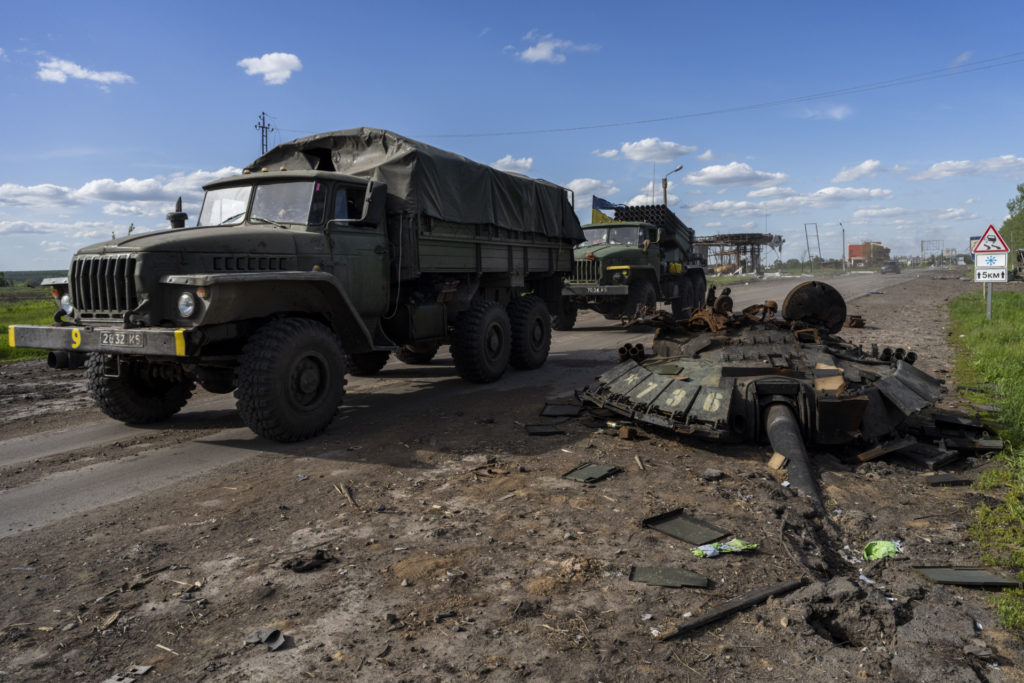 Zelensky said Ukraine’s forces have also made progress in the east, retaking six Ukrainian towns or villages in the past day.

Kharkiv, which is not far from the Russian border and only 80 kilometres (50 miles) southwest of the Russian city of Belgorod, has undergone weeks of intense shelling. The largely Russian-speaking city with a prewar population of 1.4 million was a key Russian military objective earlier in the war, when Moscow hoped to capture and hold major Ukrainian cities.

Ukraine “appears to have won the Battle of Kharkiv” the Institute for the Study of War, a Washington-based think tank, said. “Ukrainian forces prevented Russian troops from encircling, let alone seizing Kharkiv, and then expelled them from around the city, as they did to Russian forces attempting to seize Kyiv.” 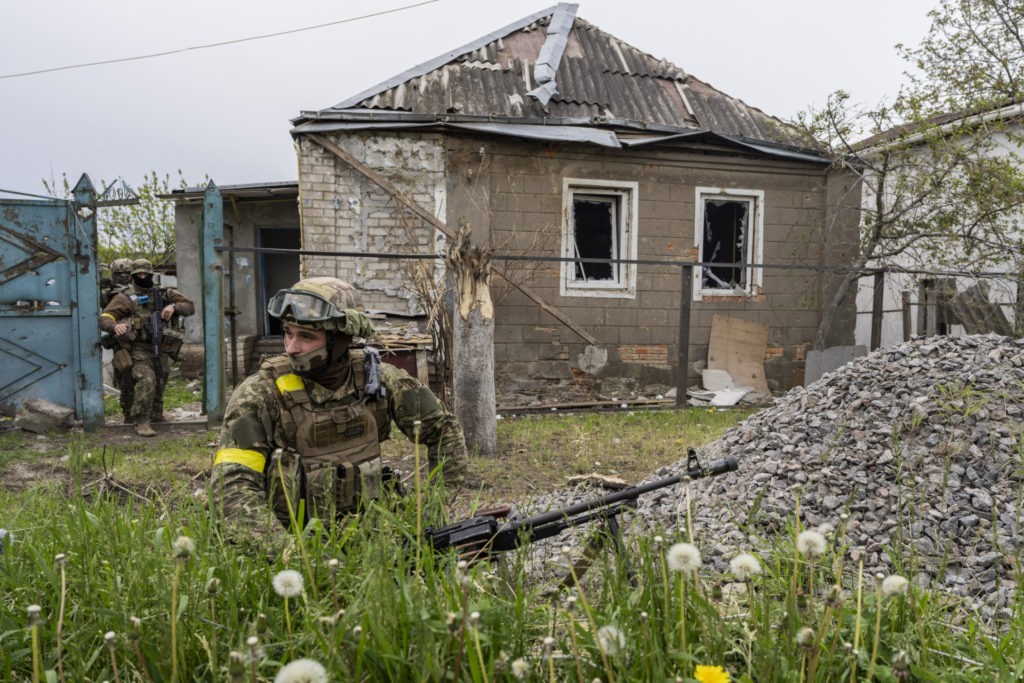 Ukrainian National Guard patrol during a reconnaissance mission in a recently retaken village on the outskirts of Kharkiv, east Ukraine, Saturday, May 14, 2022. (AP Photo/Bernat Armangue)

Regional governor Oleh Sinegubov said in a post on the Telegram messaging app that there had been no shelling attacks on Kharkiv in the past day.

He added that Ukraine had launched a counteroffensive near Izyum, a city 125 kilometres (78 miles) south of Kharkiv which was held by Russia since at least the beginning of April.

Fighting was fierce on the Siversky Donets River near the city of Severodonetsk, where Ukraine has launched counterattacks but failed to halt Russia’s advance, said Oleh Zhdanov, an independent Ukrainian military analyst.

“The fate of a large portion of the Ukrainian army is being decided – there are about 40,000 Ukrainian soldiers,” he said. 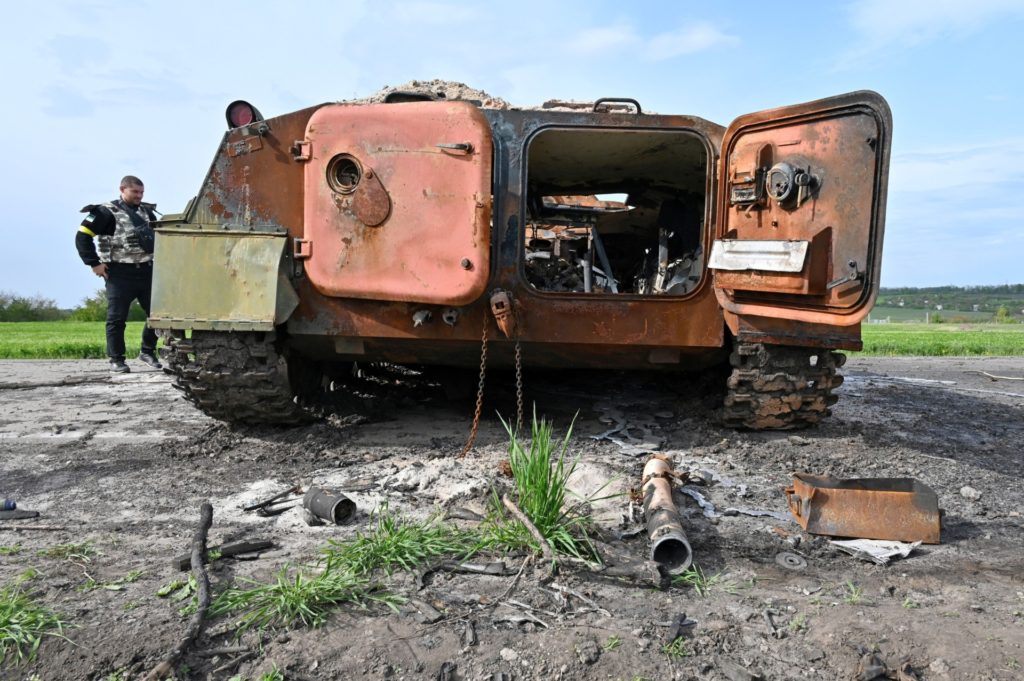 A Ukrainian serviceman looks at a destroyed armoured personnel carrier (APC) near Kharkiv on May 11, 2022, amid the Russian invasion of Ukraine (Photo by SERGEY BOBOK/AFP via Getty Images)

However, Russian forces suffered heavy losses in a Ukrainian attack that destroyed a pontoon bridge they were using to try to cross the same river — the largest in eastern Ukraine — in the town of Bilohorivka, Ukrainian and British officials said. It was another sign of Moscow’s struggle to salvage a war gone awry.

The ministry said the risky river crossing was a sign of “the pressure the Russian commanders are under to make progress in their operations in eastern Ukraine.” 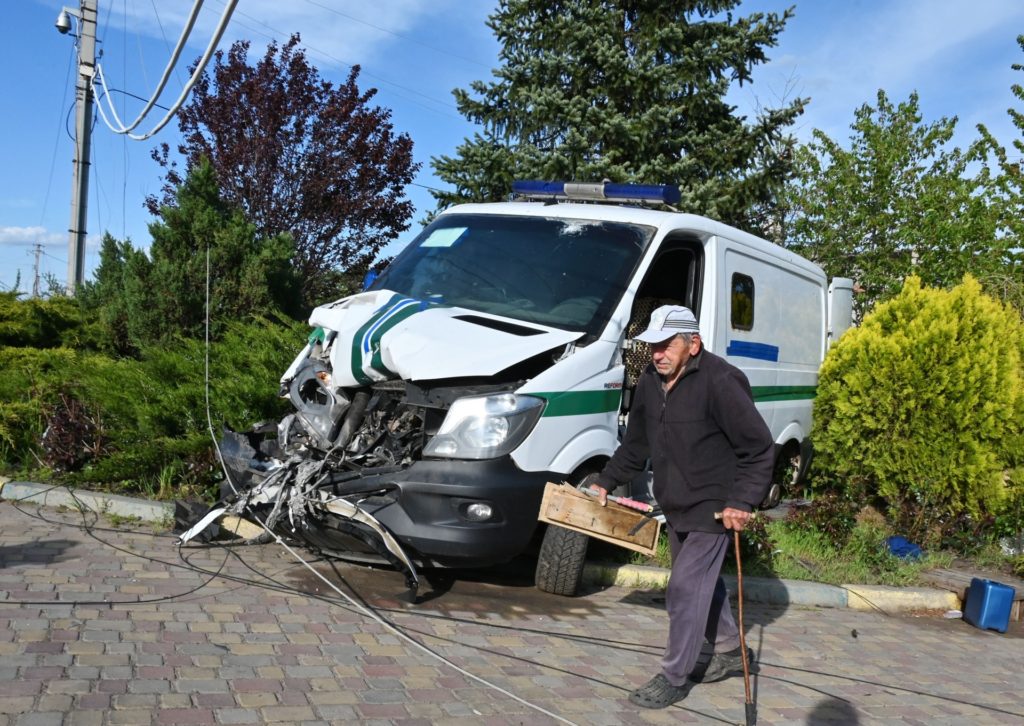 Zelensky said in his nightly video address that Ukrainians were doing everything they could to drive out the Russians and pushed for the West to increase its support.

“This will depend, unfortunately, not only on our people, who are already giving their maximum,” he said. “This will depend on our partners, on European countries, on the entire free world.”

The Ukrainian leader warned that the war was causing a food crisis around the world as a Russian blockade stops Ukrainian grain from leaving port. 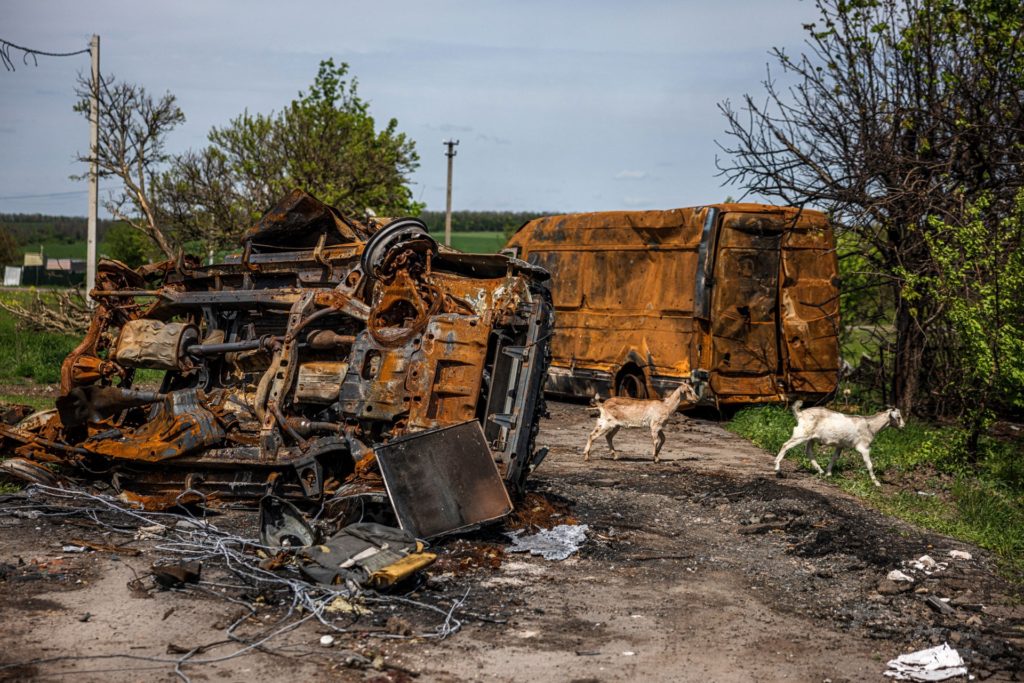 Goats cross a street between burned vehicles in the village of Vilkhivka near the eastern city of Kharkiv on May 13, 2022, on the 79th day of the Russian invasion of Ukraine. – Pentagon chief called for an ‘immediate’ ceasefire in Ukraine in a call with his Russian counterpart on May 13, 2022. (Photo by DIMITAR DILKOFF/AFP via Getty Images)

The Group of Seven (G7) leading economies echoed that warning, saying Saturday that “Russia’s war of aggression has generated one of the most severe food and energy crises in recent history, which now threatens those most vulnerable across the globe.”

Putin launched the war in Ukraine aiming to thwart NATO’s expansion in Eastern Europe. But the invasion of Ukraine has other countries along Russia’s flank worried they could be next.

This week, the president and prime minister of Finland said they favoured their country seeking NATO membership. Officials in Sweden are expected to announce a decision Sunday on whether to apply to join the Western military alliance.

Putin told Finnish President Sauli Niinisto that there are no threats to Finland’s security and joining NATO would be an “error” that would “negatively affect Russian-Finnish relations.”

The Kremlin said the two leaders had a “frank exchange of views” in a phone call on Saturday. 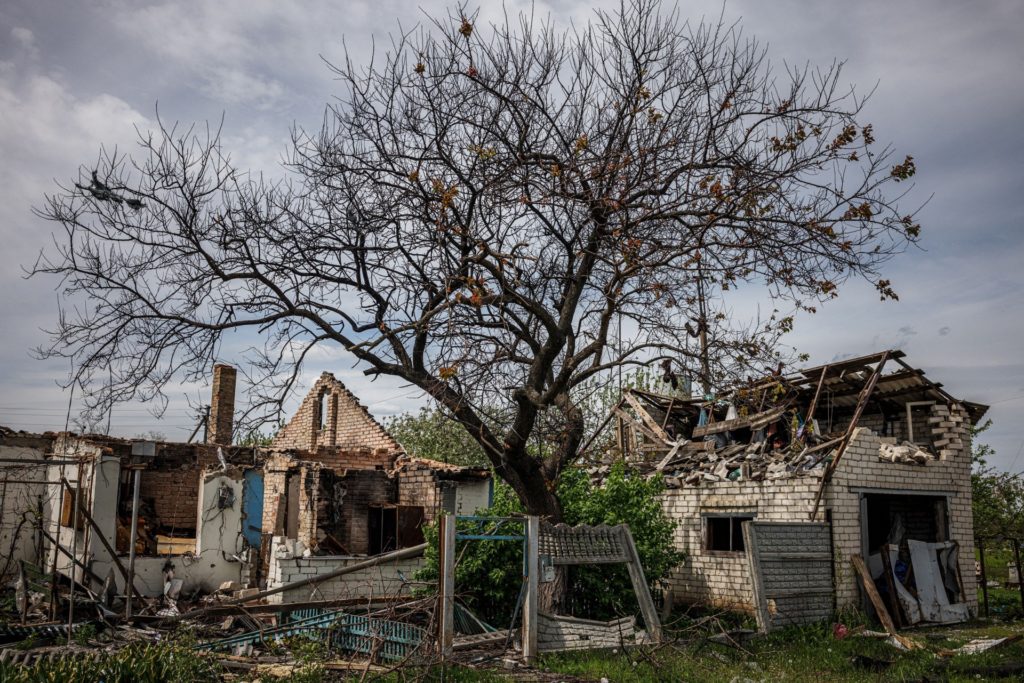 A photograph shows destroyed houses in the village of Vilkhivka, near the eastern city of Kharkiv on May 13, 2022, on the 79th day of the Russian invasion of Ukraine. (Photo by DIMITAR DILKOFF/AFP via Getty Images)

Niinistö said the discussion “was straightforward and unambiguous and was held without exaggeration. Avoiding tensions was considered important.”

Russia’s response to the moves by Finland and Sweden has so far been muted, though Deputy Foreign Minister Alexander Grushko said Saturday that their accession to NATO would heighten security tensions in the Arctic, “turning it into an arena of military competition.”

The Nordic nations’ potential bids were thrown into question Friday when Turkish President Recep Tayyip Erdogan said his country is “not of a favorable opinion” toward the idea.

U.S. Secretary of State Antony Blinken is scheduled to meet his NATO counterparts, including the Turkish foreign minister, this weekend in Germany. 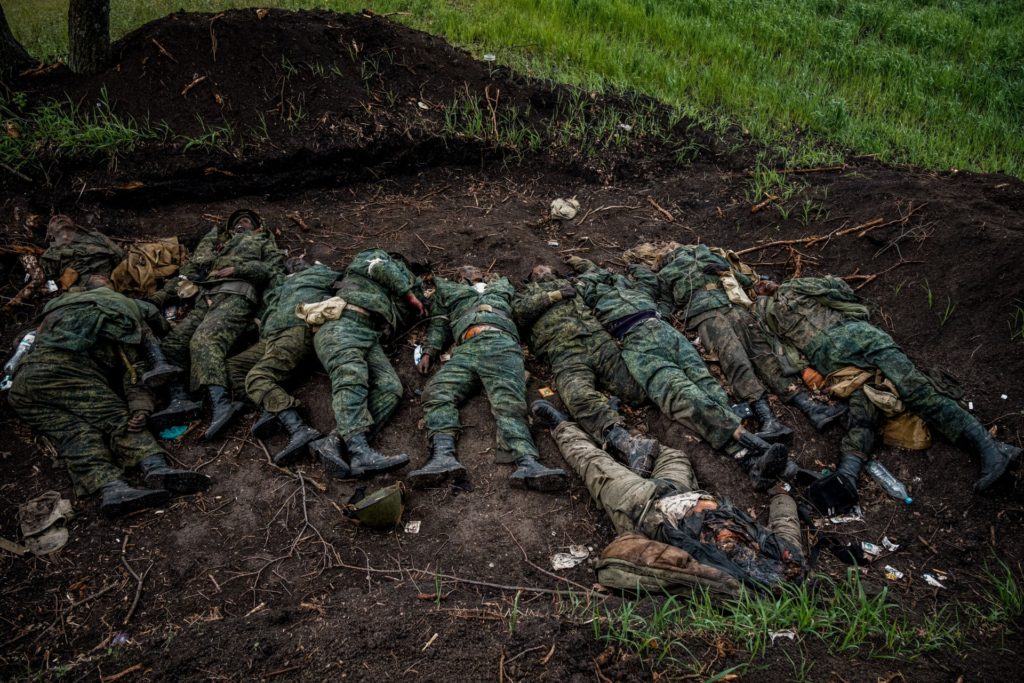 This picture taken on May 9, 2022 shows the bodies of 11 Russian soldiers found in the village of Vilkhivka, near the eastern city of Kharkiv, after the village was retaken by the Ukrainian army, amid the Russian invasion of Ukraine. (Photo by IGOR TKACHOV/AFP via Getty Images)

Yesica Fisch in Bakhmut, Yuras Karmanau in Lviv, Mstyslav Chernov in Kharkiv, Elena Becatoros in Odesa, Jill Lawless in London, and other AP staffers around the world contributed to this report.