Russian leader Vladimir Putin admitted to operational issues for the Russian military in the ongoing invasion of Ukraine, including “soldiers … who have left their combat positions,” in remarks on Wednesday to his country’s human rights agency.

Putin insisted that troop desertions were not a large-scale problem and that they were occurring “less and less now.” The head of state also noted that his regime considers the demilitarization of eastern Ukrainian territories in the Donbass region, currently under Russian control, a “lengthy process,” as much of the citizenry there has been fighting the Ukrainian government for eight years and has become accustomed to war.

Putin’s remarks occurred in a meeting with his Human Rights Council in anticipation of International Human Rights Day, which the world observes on December 10. The leader spent much of his time discussing how the Russian Human Rights Council was a legitimate steward of human rights, unlike human rights organizations based in the West, which he claimed were “racist” and did not believe Russia had “a right to exist.”

Putin’s words come as his country approaches the ninth year of its invasion of neighboring Ukraine, which began with Putin’s announcement in March 2014 that he had invaded and colonized the Crimean peninsula. In the following eight years, Russia would wage a proxy war using pro-Russian separatist groups in the Donbass region against multiple Ukrainian presidential administrations.

The proxy war became a direct one in February of this year, when Putin announced a “special operation” to oust Ukrainian President Volodymyr Zelensky, declaring his administration a “Nazi” regime and a threat to Russian national security. 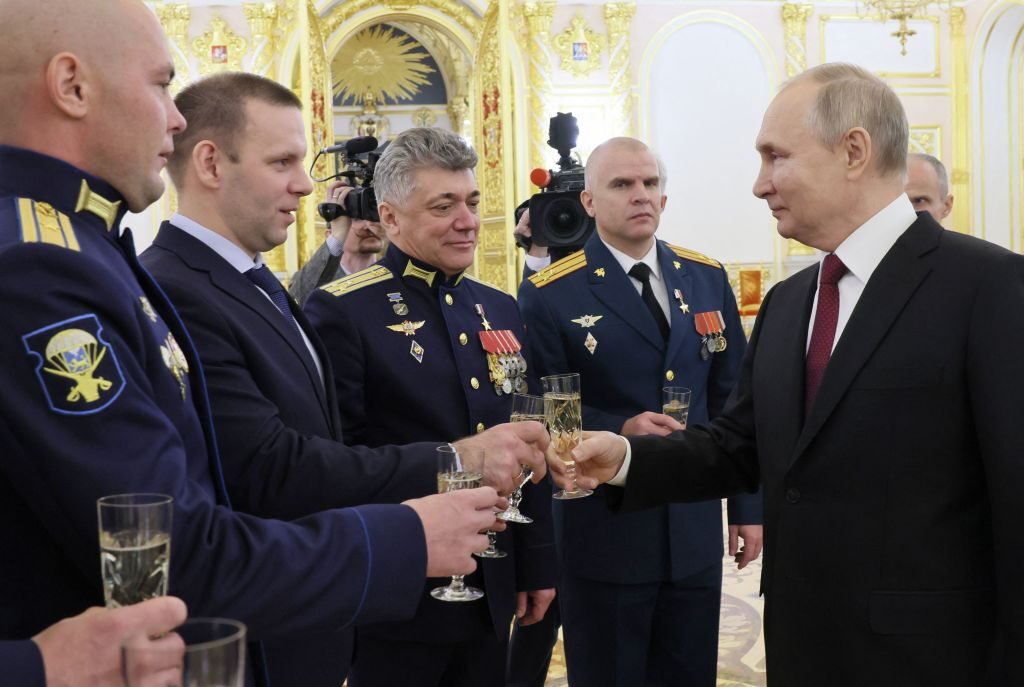 Russian President Vladimir Putin (R) toasts with Russian soldiers after awarding them with the Gold Star medal on the eve of the “Heroes of the Fatherland Day” at the Kremlin in Moscow on December 8, 2022. (MIKHAIL METZEL/SPUTNIK/AFP via Getty)

Putin repeated his accusations against Zelensky – who has expressed grave offense at being called a Nazi, given his Jewish heritage and his family’s participation in the effort against Germany in World War II – in the meeting on Wednesday, emphasizing the need to oust the Ukrainian president’s government. Putin congratulated the Russian Human Rights Council for “exposing” Zelensky’s “Nazis.”

“Importantly, you continue exposing the crimes of the Nazi regime that has asserted itself in a neighbouring country,” Putin said, according to an English-language translation by the Kremlin. “We have emphasized many times that for eight years the rights of the residents of the much-suffering Donbass were completely ignored by the international community, the so-called international community.”

Putin spent some time addressing the issue of Russian troops deserting the battlefield in response to a Council member raising it as a topic of discussion, claiming it to be a real, but minor, situation.

“About leaving positions. You are aware that soldiers who try to do that in Ukraine are shot on the spot. More than that, they even conduct mass executions in public, in front of the troops,” Putin alleged. “This is common knowledge. We do not practice anything of the kind, and we do not even have any, as you said, camps or incarceration facilities, or the like. This is all nonsense and fake claims and there is nothing to back them up with.”

Russia has once again halved Germany’s gas supply, a move that will further harm an already struggling EU economy. https://t.co/WMCm3wOAwh

“Here is what I would like to say in this regard,” he continued. “Are there soldiers out there who have left their combat positions? Yes, it has happened. Less and less now. What is the problem? After all, a person who finds himself in a war zone – even after certain training – cannot avoid experiencing certain feelings, which is absolutely normal.”

“The vast majority of these people return to combat duty of their own accord,” he claimed. ” The vast majority do so, even after recovering from wounds. Why? Because there is a period of adaptation to the circumstances in which they perform their military duties. To reiterate, we do not see this happening in mass proportions.”

“We do not have any problems with soldiers leaving combat positions. There is no such problem as desertion in the zone of the special military operation,” he insisted.

Putin also addressed the situation in Donetsk and Luhansk, the Donbass regions that he “annexed” in September. The Donbass has seen nonstop war since 2014 – unlike most of the rest of Ukraine, which had been in relative peace prior to the invasion in February – and integrating its population into Russia, Putin admitted, presented challenges. 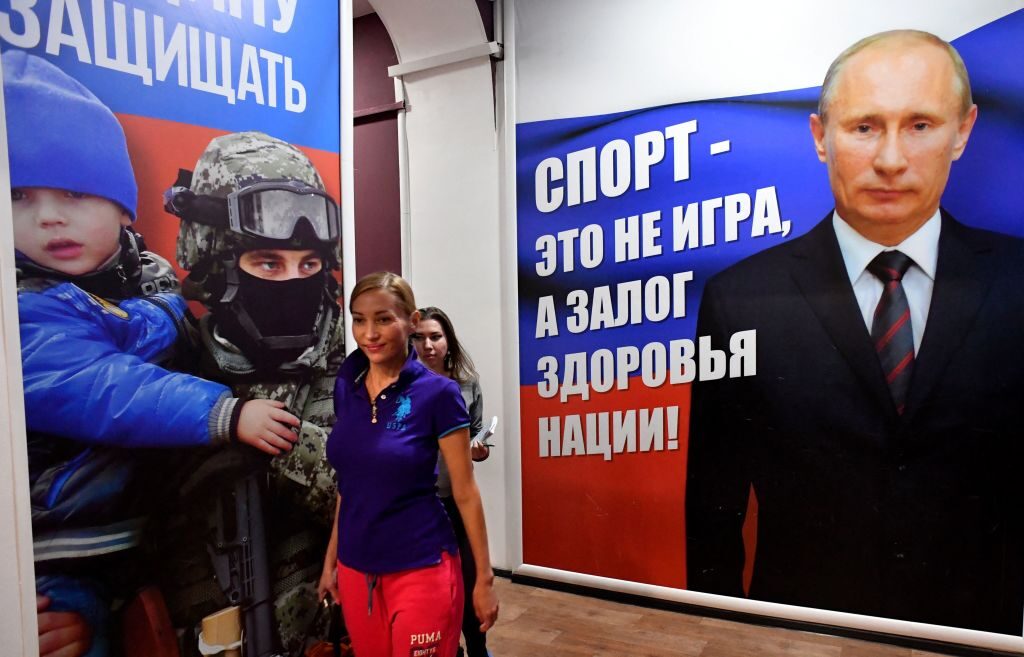 Members of the sports and patriotic club “Yaropolk” passt a poster of Russian President Vladimir Putin picture reading “Sport is not a game, but a guarantee of the health of the nation!” to take a military training course outside Moscow on November 30, 2022. (OLGA MALTSEVA/AFP via Getty)

“With regard to demobilizing students in Donbass, indeed, these territories, these republics became part of Russia, so Russian legal regulations should apply to them in full,” Putin said.

“It is not so straightforward, and is rather a lengthy process that requires a transition period, but there are things that must be done right now, and demobilizing students is one such thing.”

“Truth be told, not all Donbass students took advantage of their right to demobilize,” the leader added, suggesting many are insisting on continuing to engage in hostilities against the Ukrainians.

Putin has been accused of worsening the global food crisis by using “hunger as a weapon” at a G7 meeting on Wednesday. https://t.co/WTK3che0Xy

Some media outlets claimed that Putin’s “lengthy process” remark was meant in regard to the war against Ukraine generally. Radio Free Europe/Radio Liberty (RFE/RL) also included Putin celebrating that Russia now had a presence around the Sea of Azov, citing the wishes of Russian tsar Peter the Great. These remarks did not appear in the Kremlin transcript at press time.

“Russia captured the Sea of Azov port of Mariupol in May after a nearly three-month siege of the city,” RFE/RL reported, noting that Russia also expanded its reach around the sea, which grants Ukraine access to the much larger Black Sea, with the annexation of Kherson and Zaporizhzhia in addition to the Donbass regions in September.