A report from the Centers for Disease Control and Prevention (CDC) shows the highest abortion rate in the country – in comparison to the birth rate – is in New York City, where the abortion rate is 60 percent of its birth rate.

The Abortion Surveillance report for 2013 finds a total of 664,435 abortions were reported to CDC for that year, down five percent from 2012. Of these abortions, 98.2 percent came from 47 regular reporting areas for which the abortion rate was 12.5 abortions per 1,000 women between the ages of 15 and 44.

Additionally, while black Americans comprise 13.3 percent of the U.S. population, they make up 36 percent of the total abortions “reported” in 2013, according to the CDC’s latest report.

In 2014, the New York City Department of Health and Mental Hygiene Office also released a report that revealed more black babies are aborted than are born in that city. During his mayoral campaign, pro-abortion New York City Mayor Bill De Blasio pledged to partner with Planned Parenthood to expand his city’s abortion businesses and to wipe out pro-life pregnancy centers.

Media Research Center provides the charts below of the CDC data regarding New York City abortions: 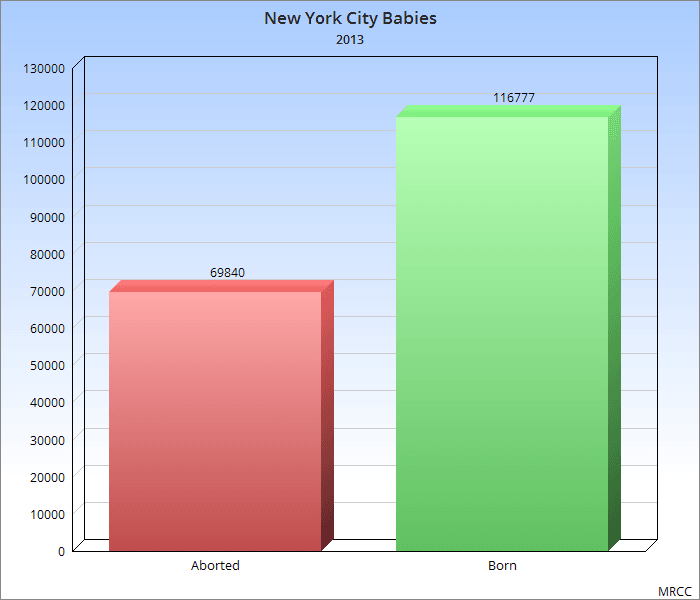 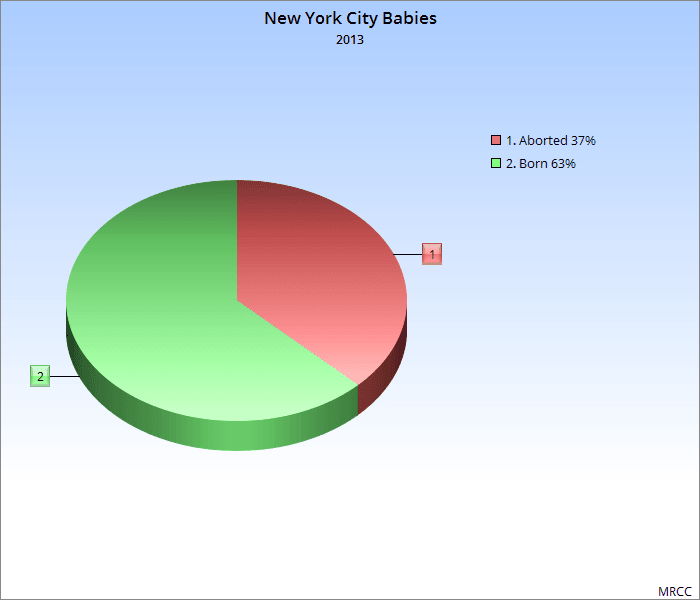 “New York City also had 1752 late term abortions (21 weeks or later gestation) in 2013,” he adds. “That’s more than the states of New Jersey and Georgia combined.”

Studnicki, however, sees other agents responsible for the lack of attention directed at abortion reporting:

As the leading cause of death, and one of the most common ambulatory procedure performed in the U.S., abortion should be the focus of intense scrutiny. Instead, there is no federal mandate for abortion reporting. Three states do not report abortion data to the CDC: California, Maryland, and New Hampshire – and it is estimated that California may produce as many as 20% of total U.S. abortions.

Of the states that do report, responses are uneven. For example, eight states and the District of Columbia do not report the gestational age at the time of the abortion. The result of this deliberate denial of a demographically and socially consequential procedure is that it cannot be understood in ways that could inform public policy. Federal funding of abortion research is virtually non-existent.

Studnicki urges the Trump administration to address the issue of abortion reporting:

I recommend that the Trump Administration undertake the following actions:

2) Create a national, universal Abortion Registry requiring the reporting of a comprehensive set of data elements which can inform the development of abortion prevention strategies

3) Plan and deploy a research strategy to fully investigate the determinants, correlates, and short- and long-term outcome effects of abortion on individuals, communities, and the U.S. society.

“Yes, the media is complicit in the lack of attention directed at abortion,” Studnicki concludes. “However, the real perpetrators of the ‘scrubbing’ of abortion from the American psyche are the establishment science and public health communities.”