ROME — The Catholic bishops of Poland have proposed to Pope Francis that Saint John Paul II, the first Polish pope, be recognized with the title “doctor of the Church.”

Last week, Bishop Stanisław Gądecki, the president of the Polish Episcopal Conference, sent a letter to Pope Francis on behalf of all the bishops of Poland, formally requesting he proclaim St. John Paul II as Doctor of the Church and patron of Europe.

Cardinal Stanisław Dziwisz, who served as the personal secretary of John Paul II for more than 40 years, said during a recent academic conference of the Europa Christi movement that John Paul deserves this recognition for having “contributed a great breath of fresh air to the life of the Church and, through it, to the broader, universal spaces of culture, politics, and science.”

“Doctor of the Church” is title given to certain extraordinary saints whose writings and preachings are deemed useful to Christians “in any age of the Church.” It suggests that the theological teachings of such men and women possessed a particular depth of understanding and that they contributed significantly to the formulation of Christian teaching in at least one area. 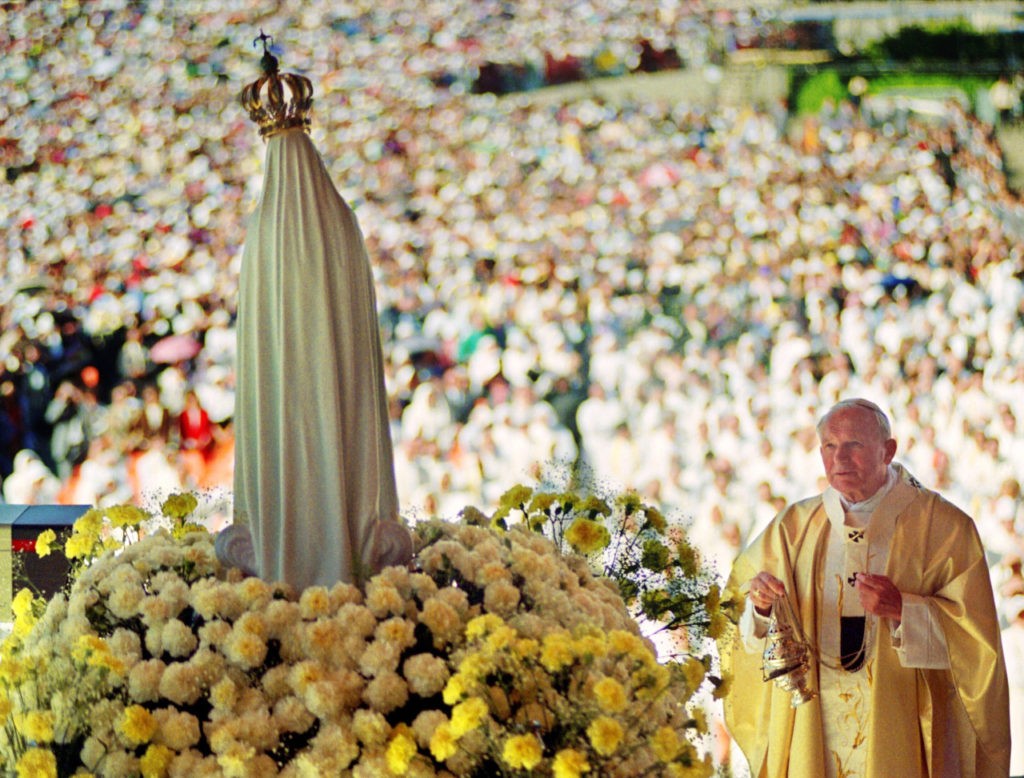 FATIMA, PORTUGAL: Pope John Paul II celebrates a mass 12 May 1991 in the Chapel of the Apparition in front of the statue of Virgin of Fatima in Fatima where about a million believers attended the Procession of Candles. In 1997, the pope dedicated a shrine in a Polish church to the Virgin of Fatima, thanking her for intervening to save him from an assassination attempt in 1981. (DERRICK CEYRAC/AFP via Getty Images)

“The pontificate of the Polish Pope was full of revolutionary decisions and important events that changed the face of the papacy and influenced the course of European and world history,” Archbishop Gądecki wrote in his letter to Pope Francis.

The wealth of the pontificate of St. John Paul II, he continued, who has already been called “John Paul the Great” by many historians and theologians, “arose from the wealth of his personality: poet, philosopher, theologian and mystic, which developed in many dimensions, from pastoral work and teaching, to offering the personal testimony of a holy life to the universal Church.”

The archbishop also underscored John Paul’s decisive contribution to the liberation of his Polish homeland from communist domination and the restoration of unity to Europe after more than 50 years of division, symbolized by the Iron Curtain.

There are currently 36 Catholic saints recognized as “doctors.” Until 1970, all the doctors of the Church were men, when Pope Paul VI named Saints Teresa of Avila and Catherine of Siena as doctors. Since then, two more women have been added to the list: Saint Therese of Lisieux and Saint Hildegard of Bingen.

The latest saint to be declared a doctor was the tenth-century Armenian monk Gregory of Narek, recognized as “doctor of the Church” by Pope Francis on February 21, 2015.