ROME — Pope Francis has published his long-awaited text on the Amazon region following a hotly contested synod of bishops in the Vatican last fall.

In his letter, titled Querida Amazonia (Dear Amazonia), the pope backed away from contentious issues such as the ordination of married men and opted instead for a more conciliatory document, intended to focus on topics that would draw broader consensus.

In this lyrical text, interspersed with lines of indigenous poetry and rhetorical flourish, Francis appeals to “those poets, contemplatives and prophets who help free us from the technocratic and consumerist paradigm that destroys nature and robs us of a truly dignified existence.”

“Only poetry,” he cites, “with its humble voice, will be able to save this world.”

Like Martin Luther King, Jr.’s “Letter from a Birmingham Jail,” Pope Francis structures his text around his four “dreams” for the region, which he calls a social dream, a cultural dream, an ecological dream, and an ecclesial dream.

“I dream of an Amazon region that fights for the rights of the poor, the original peoples and the least of our brothers and sisters, where their voices can be heard and their dignity advanced,” he writes, as a synopsis of his “social dream.”

In his focus on the poverty of the region, the pope steps away from those who seek an environmental approach that leaves the true good of the people behind.“A true ecological approach always becomes a social approach; it must integrate questions of justice in debates on the environment, so as to hear both the cry of the earth and the cry of the poor,” he states. “We do not need an environmentalism that is concerned for the biome but ignores the Amazonian peoples.”

“I dream of an Amazon region that can preserve its distinctive cultural riches, where the beauty of our humanity shines forth in so many varied ways,” he continues.

Francis’ cultural dream consists in “helping it to bring out the best of itself,” noting that this is in fact “what education is meant to do: to cultivate without uprooting, to foster growth without weakening identity, to be supportive without being invasive.”

At the same time, the pontiff does not canonize everything about indigenous culture or suggest shielding it from all external influence. 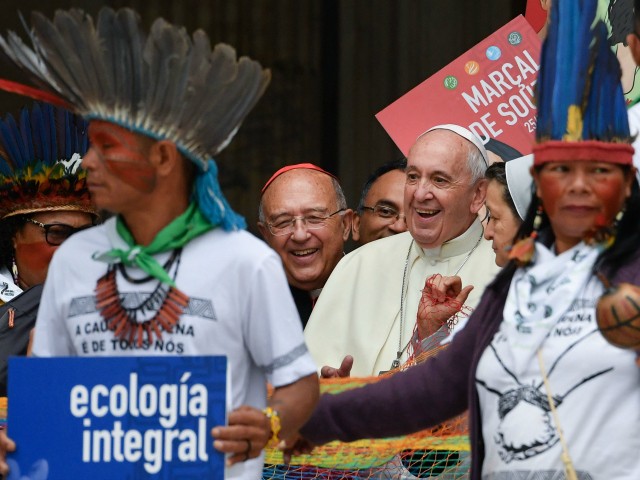 Representatives of the Amazon Rainforest’s ethnic groups, Catholic prelates, Peruvian Cardinal Pedro Ricardo Barreto (Rear C) and Pope Francis (C-R) march in procession during the opening of the Special Assembly of the Synod of Bishops for the Pan-Amazon Region outside St. Peter’s Basilica in the Vatican. (Andreas SOLARO / AFP)

“Far be it from me to propose a completely enclosed, a-historic, static ‘indigenism’ that would reject any kind of blending (mestizaje),” he says. “A culture can grow barren when it becomes inward-looking, and tries to perpetuate obsolete ways of living by rejecting any exchange or debate with regard to the truth about man.”

Third, Francis declares his dream “of an Amazon region that can jealously preserve its overwhelming natural beauty and the superabundant life teeming in its rivers and forests.”

“The Lord, who is the first to care for us, teaches us to care for our brothers and sisters and the environment which he daily gives us. This is the first ecology that that we need,” he states.

While maintaining his consistent ecological tone, the pope never mentions climate change at all in the 15,000-word text, but focuses instead on the preservation of forests and protecting the area from exploitation.

“The wisdom of the original peoples of the Amazon region inspires care and respect for creation, with a clear consciousness of its limits, and prohibits its abuse,” he says. “To abuse nature is to abuse our ancestors, our brothers and sisters, creation and the Creator, and to mortgage the future.”

He does note that the Amazon region contains “a dazzling diversity of woodlands on which rain cycles, climate balance, and a great variety of living beings also depend. It serves as a great filter of carbon dioxide, which helps avoid the warming of the earth,” but this is a far cry from the apocalyptic tones of earlier statements.

In his letter, the pope also recognizes the complicity of local government leaders in the exploitation of the territory, noting that “local powers, using the excuse of development, were also party to agreements aimed at razing the forest – together with the life forms that it shelters – with impunity and indiscriminately.”

While much of the text is a paean to the indigenous peoples of the region and their ancient relationship with the created world, the pope dedicates the final section to speak of Jesus Christ and the salvation of souls.

“I dream of Christian communities capable of generous commitment, incarnate in the Amazon region, and giving the Church new faces with Amazonian features,” he writes.

As Christians, he says, “we cannot set aside the call to faith that we have received from the Gospel. In our desire to struggle side by side with everyone, we are not ashamed of Jesus Christ. Those who have encountered him, those who live as his friends and identify with his message, must inevitably speak of him and bring to others his offer of new life: ‘Woe to me if I do not preach the Gospel!’”

Francis also distances himself from a purely philanthropic or social approach to the area, suggesting that Christians must always work simultaneously for the eternal salvation of all.

“An authentic option for the poor and the abandoned, while motivating us to liberate them from material poverty and to defend their rights, also involves inviting them to a friendship with the Lord that can elevate and dignify them,” he states. 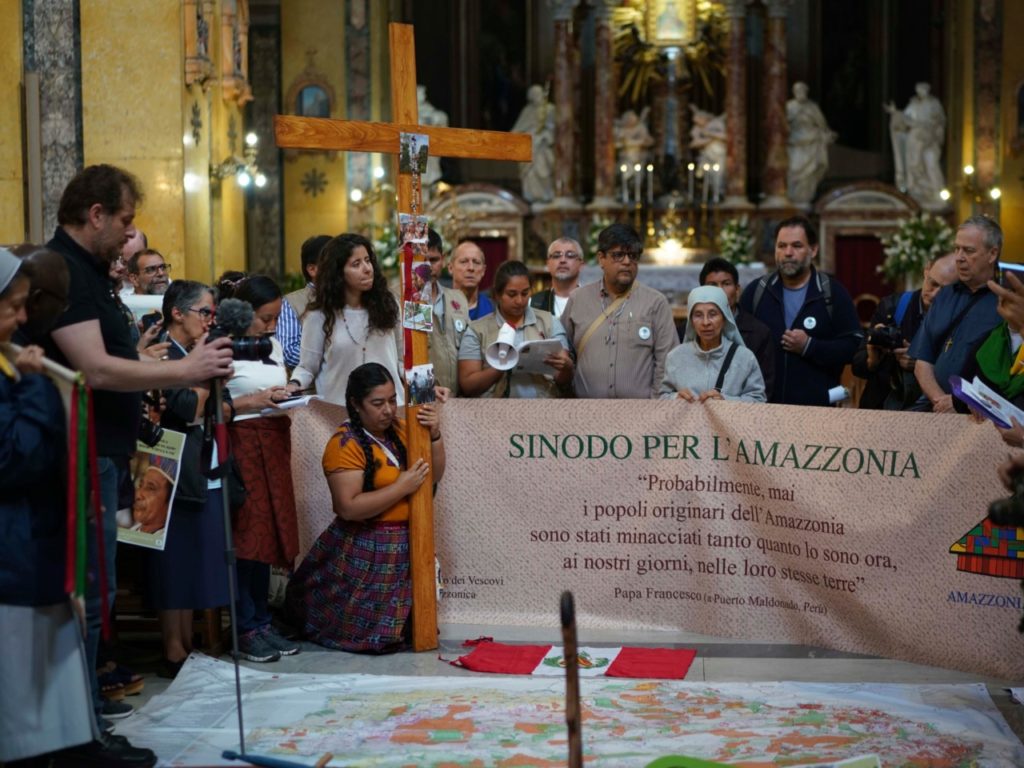 People pray and hold banner in Santa Maria in Transpontina Church, during a Via Crucis (Way of the Cross) procession of members of Amazon indigenous populations from St. Angelo Castle to the Vatican. Pope Francis is holding a three-week meeting on preserving the rainforest and ministering to its native people. (AP Photo/Andrew Medichini)

“How sad it would be if they were to receive from us a body of teachings or a moral code, but not the great message of salvation, the missionary appeal that speaks to the heart and gives meaning to everything else in life,” he continues, saying that Christianity involves more than just a “social message.”

“If we devote our lives to their service, to working for the justice and dignity that they deserve, we cannot conceal the fact that we do so because we see Christ in them and because we acknowledge the immense dignity that they have received from God, the Father who loves them with boundless love,” he declares.

“Without that impassioned proclamation, every ecclesial structure would become just another NGO and we would not follow the command given us by Christ: “Go into all the world and preach the Gospel to the whole creation,” he says.

Therefore, “the inculturation of the Gospel in the Amazon region must better integrate the social and the spiritual, so that the poor do not have to look outside the Church for a spirituality that responds to their deepest yearnings,” he notes.