In December, the Charlotte Lozier Institute (CLI), the research arm of the pro-life Susan B. Anthony List, provided an analysis of the Operation Warp Speed coronavirus vaccines and noted that the majority were not produced using abortion-derived cell lines.

“Several used abortion-derived cell lines in laboratory testing, or their use in testing could not be determined,” CLI said.

In a report updated in early March, CLI provided the following chart assessing the use of abortion-derived cell lines in some of the high profile COVID-19 vaccines: 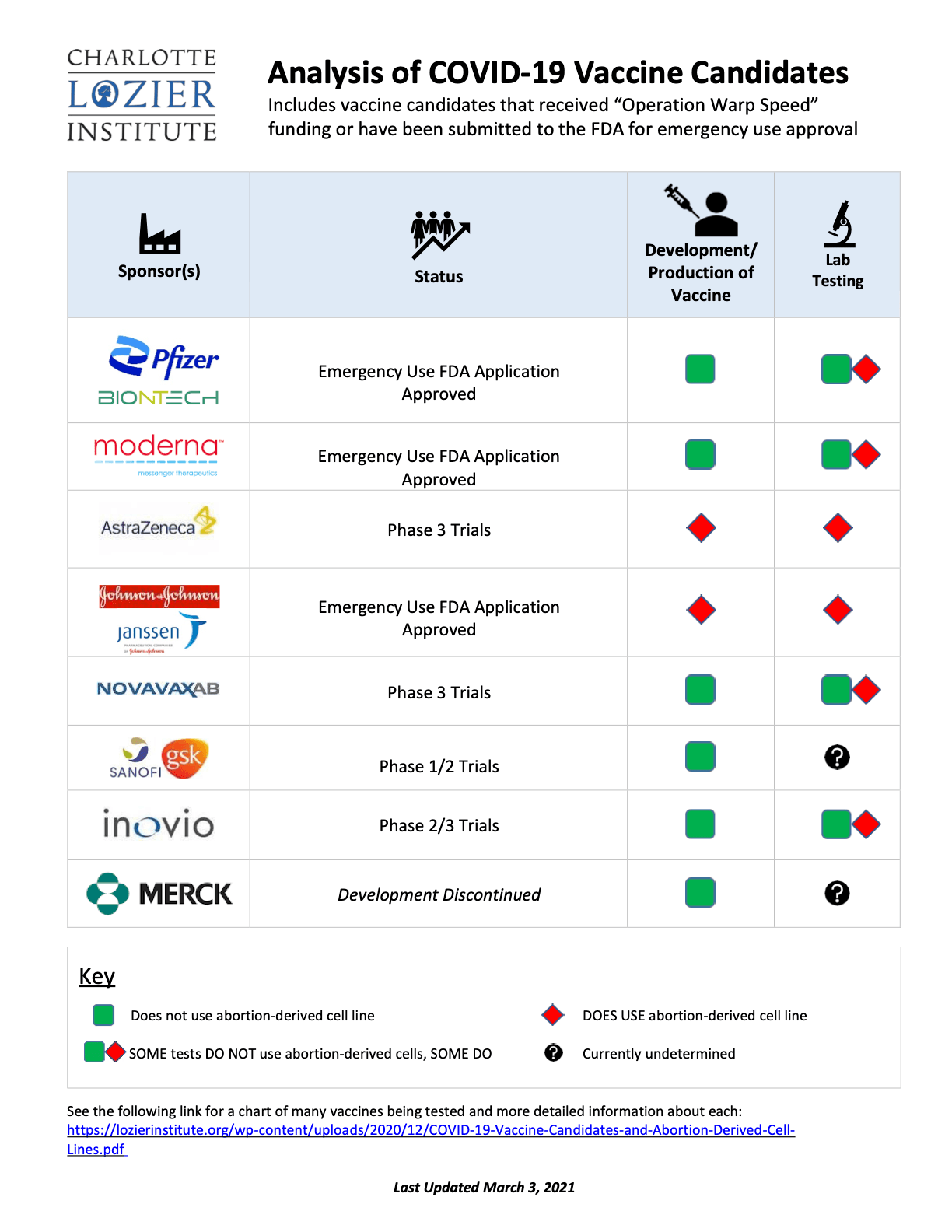 Amid the discussion about the moral and ethical questions surrounding the development of the various vaccines, Bishop Kevin Rhoades, chairman of the U.S. Conference of Catholic Bishops’ (USCCB) Committee on Doctrine, and Archbishop Joseph F. Naumann, chairman of the USCCB’s Committee on Pro-Life Activities, said in a statement in December regarding the use of the Moderna and Pfizer vaccines:

In view of the gravity of the current pandemic and the lack of availability of alternative vaccines, the reasons to accept the new COVID-19 vaccines from Pfizer and Moderna are sufficiently serious to justify their use, despite their remote connection to morally compromised cell lines.

Regarding the AstraZeneca vaccine, however, the bishops found it to be “more morally compromised” and said this vaccine “should be avoided” if there are alternatives available.

“It may turn out, however, that one does not really have a choice of vaccine, at least, not without a lengthy delay in immunization that may have serious consequences for one’s health and the health of others,” they added. “In such a case … it would be permissible to accept the AstraZeneca vaccine.”

The bishops also cautioned that Catholics should be “on guard so that the new COVID-19 vaccines do not desensitize us or weaken our determination to oppose the evil of abortion itself and the subsequent use of fetal cells in research.”

In March, Rhoades and Naumann released the following statement about the Johnson & Johnson vaccine:

The approval of Johnson & Johnson’s COVID-19 vaccine for use in the United States again raises questions about the moral permissibility of using vaccines developed, tested, and/or produced with the help of abortion-derived cell lines.

Pfizer and Moderna’s vaccines raised concerns because an abortion-derived cell line was used for testing them, but not in their production.  The Johnson & Johnson vaccine, however, was developed, tested and is produced with abortion-derived cell lines raising additional moral concerns. The Congregation for the Doctrine of the Faith has judged that ‘when ethically irreproachable Covid-19 vaccines are not available … it is morally acceptable to receive Covid-19 vaccines that have used cell lines from aborted fetuses in their research and production process.’ However, if one can choose among equally safe and effective COVID-19 vaccines, the vaccine with the least connection to abortion-derived cell lines should be chosen. Therefore, if one has the ability to choose a vaccine, Pfizer or Moderna’s vaccines should be chosen over Johnson & Johnson’s. [emphasis in the original]

The Archdiocese of New Orleans also released a statement in February that detailed specific concerns for Catholics regarding the Johnson & Johnson vaccine, the use of which has since been paused due to safety concerns.

The Archdiocese of New Orleans, in light of guidance from the Vatican, the United States Conference of Catholic Bishops, and The National Catholic Bioethics Center affirm that though there was some lab testing that utilized the abortion-derived cell line, the two vaccines currently available from Pfizer and Moderna do not rely on cell lines from abortions in the manufacturing process and therefore can be morally acceptable for Catholics as the connection to abortion is extremely remote.

It is under the same guidance that the archdiocese must instruct Catholics that the latest vaccine from Janssen/Johnson & Johnson is morally compromised as it uses the abortion-derived cell line in development and production of the vaccine as well as the testing.

The New Orleans Archdiocese noted that while the decision to receive a COVID-19 vaccine “remains one of individual conscience,” it also maintained that “in no way does the Church’s position diminish the wrongdoing of those who decided to use cell lines from abortions to make vaccines.”

“In doing so, we advise that if the Moderna or Pfizer vaccine is available, Catholics should choose to receive either of those vaccines rather than to receive the new Johnson & Johnson vaccine because of its extensive use of abortion-derived cell lines,” the statement read.

In a news report on April 1, Reuters noted that Jake Sargent of Johnson & Johnson confirmed that his company’s vaccine does not contain “aborted fetal DNA.”

“Fetal cell lines (not fetal tissue) are sometimes used in the development, confirmation or production process of making vaccines – including the COVID-19 vaccine ( here , here ),” the report continued, adding:

The Pfizer/BioNTech and Moderna vaccines used fetal cell lines in their testing stages. Johnson & Johnson used a human fetal cell line called PER.C6, developed from the retinal cells of an 18-week-old fetus aborted in 1985 in its production and manufacturing stages.

These fetal cell lines are not taken from recent abortions, but are derived from decades old fetal cells (more detail on this here ). These cells replicate over decades in laboratory settings, thousands of times removed from the original fetus cells, becoming known as fetal cell lines.

Although it is true that the animal-phase testing for these vaccines used abortion-derived fetal cells, commendably it does not appear that production methods utilized such cells.

However, the medical groups noted their concern about the “standard use of abortion-derived fetal cell lines to produce these vaccines by companies such as AstraZeneca and Johnson & Johnson.”

In March, leading pro-life scholars from the Ethics and Public Policy Center released a statement on the ethical considerations of the coronavirus vaccines available to Americans.

EPPC President Ryan T. Anderson, board member and Princeton professor Robert P. George, and fellow and Notre Dame Professor O. Carter Snead, as well as two professors at pontifical universities in Rome and other U.S.-based scholars, explained why they believe it is morally acceptable for pro-life citizens to receive any of the COVID-19 vaccines currently available:

While there is a technical causal linkage between each of the current vaccines and prior abortions of human persons, we are all agreed, that connection does not mean that vaccine use contributes to the evil of abortion or shows disrespect for the remains of unborn human beings. Accordingly, Catholics, and indeed, all persons of good will who embrace a culture of life for the whole human family, born and unborn, can use these vaccines without fear of moral culpability.

The EPPC scholars explained the four major vaccines available to Americans, produced by Moderna, Pfizer, Johnson & Johnson, and AstraZeneca, all involve “some use of ‘immortalized’ human cell lines.”

Ordinarily, cells taken from a body have a limited life span, undergoing only a fixed number of cell divisions before they arrest and die. For ongoing research, scientists prefer to use a “cell line,” or a population of cells derived from a single source that has been modified (typically by some form of genetic mutation) to divide indefinitely in culture. Such “immortalized” cell lines allow scientists to conduct many experiments on cells that are both genetically identical and routinely available in the laboratory.

“No fetal ‘body parts’ are present in these immortal cell lines,” the scholars asserted.

The EPPC scholars said that individuals with pro-life convictions “should be free to make such choices as their consciences dictate.”

“However … one is not morally required to make such a choice, and those who do not are not morally culpable,” they added.