ROME — Pope Francis had harsh words for those who criticize him, saying such attacks are “the work of the devil,” La Civiltà Cattolica revealed Tuesday.

There is “a large Catholic television channel that has no hesitation in continually speaking ill of the pope,” Francis said during a meeting with Jesuits in Bratislava during his recent visit there.

“I personally deserve attacks and insults because I am a sinner, but the Church does not deserve them. They are the work of the devil. I have also said this to some of them,” he added.

In its report on the meeting, America magazine, the Jesuit flagship journal in the U.S., said the pope was referring to EWTN (Eternal Word Television Network) when speaking of “a large television channel” that criticizes him.

“Yes, there are also clerics who make nasty comments about me,” the pope continued. “I sometimes lose patience, especially when they make judgments without entering into a real dialogue. I can’t do anything there.”

The EWTN Global Catholic Network was founded in 1981 by cloister Franciscan nun Mother Angelica and is the largest religious network in the world, broadcasting in multiple languages and reaching an audience in more than 145 countries.

“God wants you to be in the world, but so different from the world that you will change it. Get cracking!” – Mother… 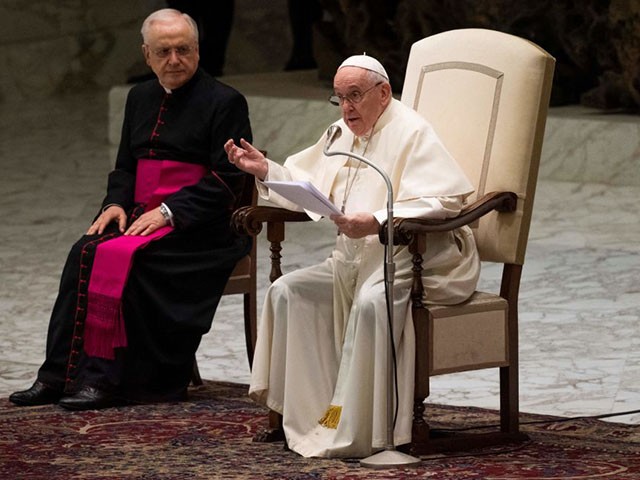 Pope Francis speaks during his weekly general audience in the Paul VI hall at the Vatican on September 1, 2021. (TIZIANA FABI/AFP via Getty Images)

“Some people accuse me of not talking about holiness. They say I always talk about social issues and that I’m a communist,” Francis said. “Yet I wrote an entire apostolic exhortation on holiness, Gaudete et Exsultate.”

Asked by a fellow Jesuit about those who are nostalgic for the past, the pope said that some Catholics experience “the temptation to go backward” because they are afraid of being free.

“It is a form of ideological colonization. It is not really a universal problem, but rather specific to the churches of certain countries,” Francis said. “Life scares us.”

“I’ll repeat something I said to the ecumenical group I met here before you: freedom scares us,” he added. “In a world that is so conditioned by addictions and virtual experiences it frightens us to be free.”