The extremely succinct communiqué from the Holy See Press Office noted that during “a brief conversation, the cordial relations between the Holy See and India were discussed.”

Modi is known as a hardliner of India’s ruling Bharatiya Janata Party (BJP), which is closely tied to the Rashtriya Swayamsevak Sangh (RSS), a Hindu nationalist group.

Since the BJP’s rise to power in 2014, Christians and other religious minorities have complained of increased violence, harassment, and discrimination carried out with impunity.

Last July, the Evangelical Fellowship of India (EFI), a Christian watchdog group, published its semiannual report, in which it chronicled 145 recorded incidents of anti-Christian persecution in India during the first half of 2021. This included the murder of pastors, attacks on Christian churches, physical violence, threats, and religiously motivated harassment and discrimination.

The widespread anti-Christian violence in India stems from “an environment of targeted hate” aggravated by a “sense of impunity generated in India’s administrative apparatus,” the group asserted.

According to the report, the “most alarming development” has been the expansion of anti-conversion laws, known euphemistically as Freedom of Religion Acts. These laws “ostensibly punish forced or fraudulent religious conversions,” the report said. “But in practice, they are used to criminalise all conversions, especially in non-urban settings.”

Christians in India are increasingly the victims of “myths” and “false narratives” propagated by Hindu nationalist organizations such as RSS and Vishva Hindu Parishad (VHP), the report noted.

“The Christians are now in a state of shock and fear,” said the EFI. “Despite their best efforts to seek police intervention, no help has arrived.” 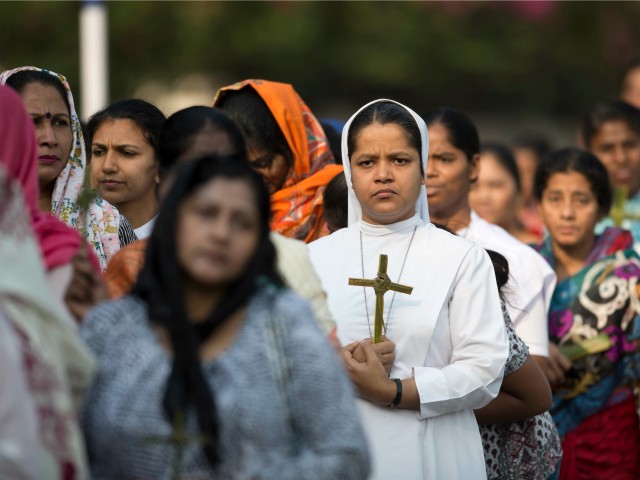 A Christian nun holds a crucifix during a Good Friday procession in Hyderabad, India (AP Photo/Mahesh Kumar A.).

The primary driver of anti-Christian persecution in India is Hindu nationalism, closely tied to the idea that to be a “real” Indian, you must be a Hindu. In its annual World Watch List of nations where it is most difficult to be a Christian, Open Doors placed India at number ten in 2021, whereas less than a decade ago, India was ranked number 31.

According to Open Doors, India’s Christians have encountered growing hostility every year since Modi came to power as prime minister in 2014.