The Houthi jihadist organization in Yemen is persecuting Christians and other minorities, thereby blocking aid to them months after President Joe Biden de-listed them as a terrorist group, Open Doors USA CEO David Curry told Breitbart News on Thursday.

International media reports often fail to note the religious dimension of the brutal civil war in Yemen, but the Houthis are, in fact, an Islamist religious organization that enjoys support from rogue state Iran.

“Everyone in Yemen is facing a shortage of food and medical care. Christians and other religious minorities are especially vulnerable because of aid discrimination. Yemen considers itself a Muslim country – to be Yemeni is to be Muslim. Consequently, emergency relief is often distributed through local Islamic leaders and mosques, who hesitate to offer it to people outside their congregation,” Curry explained.

Curry said his group has received reports of Yemeni Christians who were “refused treatment at under-resourced hospitals.”

Christians have even been arrested when they sought treatment for the Wuhan coronavirus because Houthi officials “blame Westerners, whom they equate to Christians, for bringing the virus to the area.”

Human rights groups have reported the Houthis seizing shipments of medicine and protective gear and holding them hostage in exchange for concessions from Western governments.

Open Doors USA has been helping persecuted Christians in over 60 countries for more than 60 years. Like other human rights organizations, it found a steep challenge in Yemen because of war, political instability, and a pervasive atmosphere of fear.

“Before the war, an estimated 40,000 Christians were in the country. Now Christians in Yemen are forced to practice their faith in secret, so it’s difficult to take a precise census,” Curry said.

“Today, Open Doors estimates a few thousand remain, most of whom have converted from a Muslim background. Proselytization and conversion away from Islam are considered illegal, so anyone who discovers a convert is frequently forced to report the conversion to local authorities,” he said.

Curry noted Yemen also has a “tiny Jewish community,” largely based in the capital city of Sana’a, captured by the Houthis when they overthrew the internationally-recognized government in 2014.

Houthi officials openly regarded Yemen’s Jews as an enemy population and drove most of them out of the country. A March 2021 report from the London-based newspaper Asharq al-Awsat claimed there were only four elderly Jews left in all of Yemen. 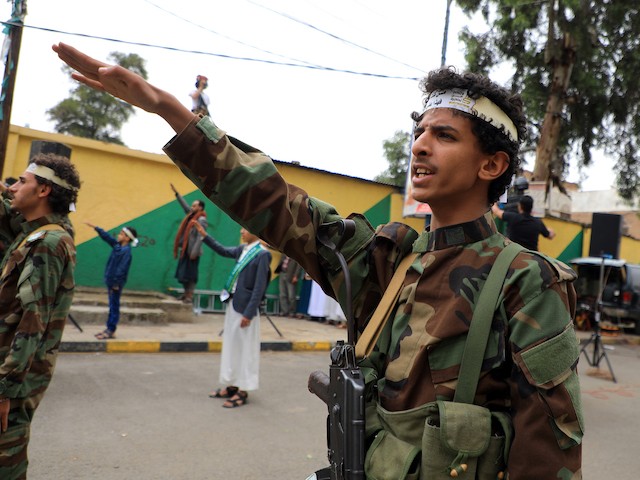 Security forces loyal to Yemen’s Shiite Huthi rebels perform a salute during a gathering in the Huthi-held capital Sanaa on August 8, 2020, celebrating Eid al-Ghadir, which commemorates the events of Ghadir al-Khumm, during which Shiites believe that the Prophet Mohammed designated Ali as his successor. (Mohammed Huwais/AFP via Getty Images)

The Houthis call their political-religious movement “Ansar Allah,” or “Army of God.” The name is rarely used by foreign media, but it was used by the Biden State Department when it revoked Ansar Allah’s designation as a terrorist organization in February 2021 – one of President Joe Biden’s first official acts.

“The revocations are intended to ensure that relevant U.S. policies do not impede assistance to those already suffering what has been called the world’s worst humanitarian crisis,” Secretary of State Antony Blinken explained at that time.

Blinken promised the administration remained “clear-eyed about Ansar Allah’s malign actions and aggression,” including “diverting humanitarian aid” and “brutally repressing Yemenis in areas they control.” The Houthis have resolutely continued doing all of those hideous things, with only sporadic comment from anyone in the Biden administration.

The Houthis’ religious teachings are drawn from the Zaidi sect of Shiite Islam, which advocates theocratic rule similar to the ayatollah system in Iran. The Houthis presented their insurgency as both a tribal secessionist dispute with the Yemeni central government and a religious crusade for the Zaidi faith.

The Houthis are also bitterly anti-American, anti-Semitic, anti-Israel, and generally anti-Western. Ansar Allah’s official slogan is “Allahu Akbar, Death to America, Death to Israel, a Curse on the Jews, Victory to Islam.” Curry noted that “radical Islamic teaching” and anti-U.S. and anti-Israel statements are distributed by the Houthi government and written into textbooks for small children. 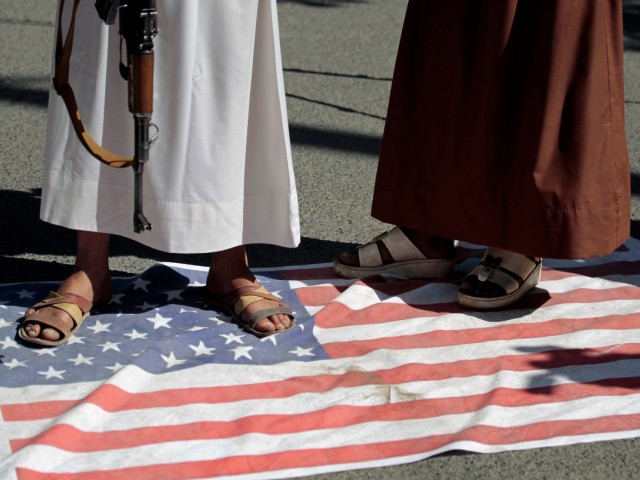 Houthi supporters step and walk on a representation of the U.S. flag during a demonstration outside the closed U.S. embassy against the United States over its decision to designate the Houthis a foreign terrorist organization in Sanaa, Yemen, January 18, 2021. (AP Photo/Hani Mohammed)

“The Houthis have an extremist agenda: to force out anyone who disagrees with their radical interpretation of Islam. To this effect, Houthi authorities are making every effort to pressure Christians to return to Islam or leave,” Curry said.

Sadly, Curry noted the internationally-recognized civilian government of Yemen, currently run by President Abdrabbuh Mansour Hadi and headquartered in the southern port city of Aden, is not much help to Christians or Jews because it, too, is Islamist in character.

“Though their constitution claims to uphold principles like non-discrimination, freedom of thought and expression, the loophole is that it’s all submitted under Islamic law. So they can use blasphemy and apostasy laws to criminalize the practice of Christian faith, punishable by death,” he noted.

Curry feared the brutal Houthi offensive to capture the key northern city of Marib, paving the way to potentially conquer all of Yemen, would make an unimaginably horrible humanitarian crisis even worse.

“We can expect to see more aid prevention, more violent attacks, more discrimination and arrests of suspected political and religious dissidents. The spread of radical Islamic caliphates is one of the greatest, and perhaps underestimated, threats to human rights in the modern age,” he warned.

Curry quoted reports from the U.S. Agency for International Development (USAID) that found removing the Houthis’ designation as terrorists made it possible to resume humanitarian operations in some parts of Yemen, albeit under “new restrictions.” The State Department announced another $290 million in assistance for Yemen in September 2021.

“While lifting the designation appears to have cleared the way for additional aid, it’s an insufficient solution to the Houthi problem because it puts the aid into the hands of a terrorist group,” Curry noted.

Curry advocated restoring Ansar Allah’s designation as a terrorist organization, holding the Houthis responsible for their deeds over the past year, and authorizing more stringent actions against Houthi leaders.

On Wednesday, the State Department took a step in that direction by designating the Houthis as “Entities of Particular Concern” for violating the International Religious Freedom Act. Eight other entities received that designation on Wednesday, and most of them are terrorist organizations, including Somalia’s al-Shabaab, the Islamic State and its various branches, and Boko Haram in Africa.

The Taliban in Afghanistan was also designated, joining the Houthis as an entity the U.S. government almost classifies as terrorists. One might argue the U.S. officially considers the Taliban to be half-terrorist, since its exceptionally ugly militant wing – the Haqqani Network – remains so designated, and numerous officials in the Taliban regime are Haqqanis. 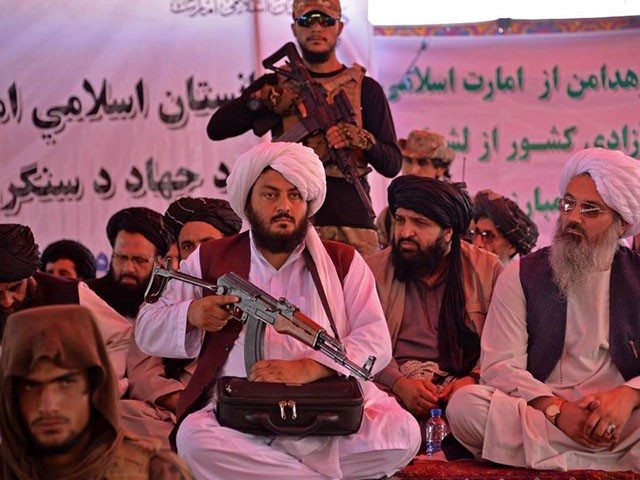 Taliban officials and commanders attend an open-air rally in a field on the outskirts of Kabul on October 3, 2021, as the Taliban supporters and senior figures held their first mass rally in a show of strength as they consolidate their rule of Afghanistan. (Hoshang Hashimi/AFP via Getty Images)

Curry said the Entity of Particular Concern label was a positive step since it “paves the way for targeted sanctions against leaders and individuals guilty of persecuting religious minorities,” but he urged the Biden team to take the “next step” and restore the Trump administration’s terrorist designation for the Houthis.

“Even as we make every effort to provide aid to the people victimized by the Houthis, we need tools like the Entity of Particular Concern designation to counter the legitimacy that radical groups like the Houthis crave as they try and expand their territory,” he said.

Curry concluded by asking for prayers for Christians in Yemen.

“Pray for their provision, their protection, and that their faith would continue to flourish under pressure,” he said, recommending the Open Doors Prayer App to stay updated on the latest prayer requests for persecuted Christians in Yemen and around the world.

“We can put those prayers into action by giving to help Christians in Yemen and neighboring countries with advocacy, aid, and spiritual support,” he said.

The Houthi offensive on Marib continued this week. Houthi forces pushed government troops out of the strategic port city of Hodeidah on Sunday, potentially jeopardizing humanitarian aid shipments once again. On Wednesday, the United Nations demanded the release of two staffers captured by the Houthis in Sana’a and held incommunicado for over a week.