Sports fans have been left with nothing to shout about after organizers of next year’s postponed Tokyo Olympic Games said they may seek an order banning spectators from cheering as well shouting or talking loudly, to minimise the risk of coronavirus infections.

A  senior official said Thursday the move follows a gymnastics test event where mask-wearing spectators, urged not to shout or cheer, confined themselves to polite applause and softened murmurs of benign approval.

Tokyo 2020 chief executive Toshiro Muto said fans arriving in Japan may be spared a mandatory two-week quarantine, saying it would be too hard to enforce, but other restrictions are bound to follow.

“There’s a possibility that we might ask the (Olympic) spectators to refrain from shouting or talking in a loud voice,” Muto said after a committee meeting, AFP reports.

“When we think of the impact, we believe it is an item for consideration, to reduce the risk of airborne droplets.”

Fans are allowed at sports events in Japan, usually in limited numbers, but they are advised not to shout, cheer or outwardly express emotions. 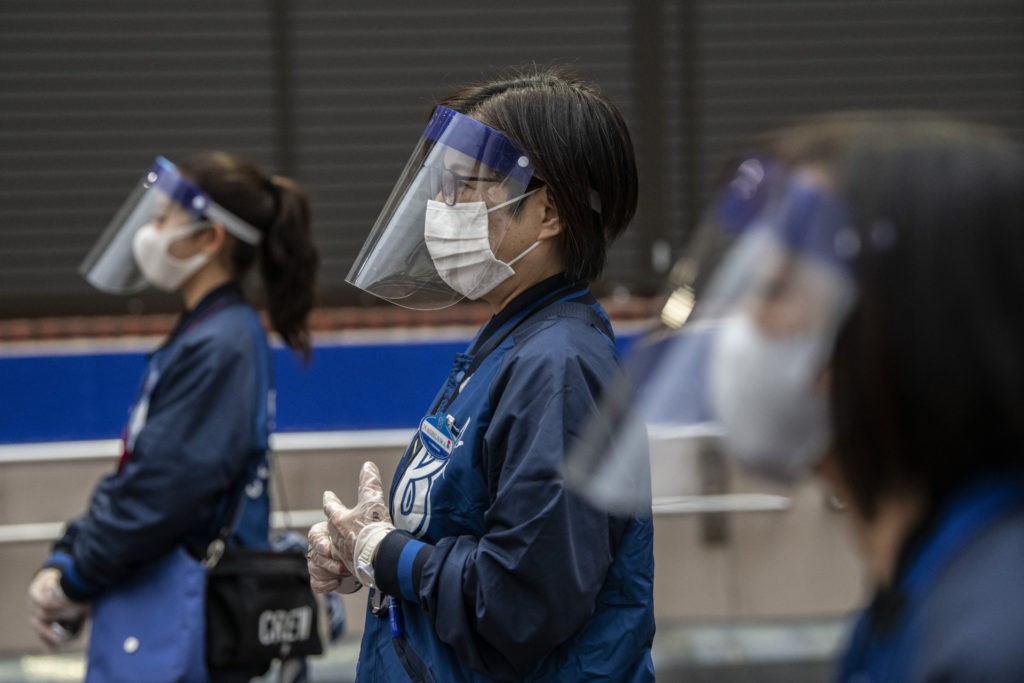 Stewards wearing plastic face visors and face masks wait to check tickets at Yokohama Stadium ahead of a baseball match between Yokohama DeNA Baystars and Hanshin Tigers that is being used as a test event to check measures for preventing the spread of Covid-19 coronavirus at big events, on October 30, 2020 in Yokohama, Kanagawa, Japan. (Carl Court/Getty Images)

International Olympic Committee president Thomas Bach, who will visit next week, on Wednesday said he was increasingly confident that a “reasonable number” of fans will be allowed at the Games.

“As the number of foreign spectators is so high, 14 days of quarantine and a ban on public transport use is unrealistic,” he told reporters after a committee meeting.

Instead, “pre-visit tests and health monitoring, careful screening at the border, post-entry checks on activities and health, (and) taking swift measures if symptoms appear” are among the measures being considered.

The Olympics were delayed for a year to next July by the coronavirus pandemic but despite a rising caseload worldwide, the outlook is brightening for the Games.

Japan is so confident of the future outlook that Japanese Prime Minister Suga Yoshihide said the event may be a “good opportunity” to discuss important matters, including a peace deal, with North Korean dictator Kim Jong-un.

He did not confirm Kim would receive an invite, nor did he rule it out, as Breitbart News reported.