President Joe Biden’s decision to cut deliveries of monoclonal antibodies to southeastern states, in what critics have called a politically-motivated effort to punish Republican states, could end up sentencing black people to death from coronavirus.

On Tuesday, Politico reported that the Biden administration was going to ration the distribution of monoclonal antibodies from Regeneron, given that “demand from a handful of southern states … accounted for 70 percent of all orders in early September.”

There is no shortage of Regeneron, and the federal government controls the distribution of the drug completely.

The decision came after the administration said that it would not cut supply to those states, and after Biden himself announced last week that “we will increase the average pace of shipment across the country of free monoclonal antibody treatments by another 50 percent.”

Biden’s approach, Politico said, would hurt”GOP-led states… that have made the pricey antibody drug a central part of their pandemic strategy, while simultaneously spurning mask mandates and other restrictions.”

The states affected include Alabama, Florida, Georgia, Louisiana, Mississippi, Tennessee, and Texas. All except Louisiana are governed by Republicans.

Together, these seven states comprise over 15 million black Americans. 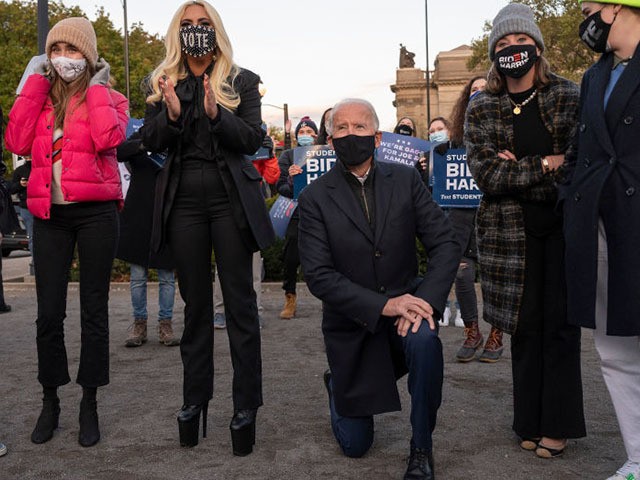 Democratic presidential candidate Joe Biden (C) kneels as he looks on with with Lady Gaga (3L) before a drive-in rally in Pittsburgh, Pennsylvania on November 2, 2020. – The US presidential campaign enters its final day Monday with a last-minute scramble for votes by Donald Trump and Joe Biden, drawing to a close an extraordinary race that has put a pandemic-stricken country on edge. (Photo by JIM WATSON / AFP) (Photo by JIM WATSON/AFP via Getty Images)

Florida Gov. Ron DeSantis (R) noted Thursday that over half of his state’s recipients of monoclonal antibody treatments from Regeneron, which are distributed by the federal government, were vaccinated before they became ill from breakthrough COVID-19 infection.

White House press secretary Jen Psaki defended the cuts in her press briefing Thursday, saying: “Our supply is not unlimited, and we believe it should be equitable.” She acknowledged that there was no shortage of the drug, but insisted that the distribution be “equitable” regardless of need: “I think our role as the — as the government overseeing the entire country is to be equitable in how we distribute. We’re not going to give a greater percentage to Florida over Oklahoma.”

DeSantis said that his state will seek to purchase monoclonal antibodies directly from another company, GlaxoSmithKline, which manufactures the treatment under the name sutrovimab, rather than purchasing through the federal government.