Republican Senators will protect Americans from the transgender ideology in 2023, according to a 2022 campaign platform from the senator who is helping to elect GOP candidates to the Senate this November.

“Facts are facts, the earth is round, the sun is hot, there are two genders … To say otherwise is to deny science,” said the campaign document released February 22 by Sen. Rick Scott (R-FL), who is the 2022 chairman of the National Republican Senatorial Committee (NRSC).

In exchange for Americans’ votes, the document promises to protect the government’s recognition of the two different-and-complementary sexes:

Humans are born male and female, there are two genders, and to deny that is to deny science.

No government forms will include questions about “gender identity” or “sexual preference.”

No doctor will be allowed to perform irreversible surgical or gender-altering procedures on any minor child. Once they become adults, they can do what they wish.

We will protect women’s sports by banning biological males from competing. It is hugely unfair and would erase many of the gains women have made in athletics over the last 50 years.

Scott’s promise to oppose transgenderism is a political no-brainer. Many polls show the American public is increasingly opposed to transgender activists’ far-reaching demands, including government support for irreversible surgery and hormone treatment for children.

Scott’s transgender policy — and the broader campaign platform — is getting applause.

“This is exactly the type of platform GOP candidates should be running on this year,” responded Terry Schilling, the president of the pro-family American Principles Project. He continued:

All of the most important — and electorally advantageous — issues are here, from opposing critical race theory in schools and defending women’s sports to reining in Big Tech and protecting children from sexualization. If the Republican Party is serious about becoming the party of families, these are precisely the issues that must be a top priority.
Establishment operatives at the RNC and elsewhere should take note: this is how the GOP will win elections, not by surrendering the culture war but by fighting back. Sen. Scott deserves major kudos for releasing such a bold plan, and Republican candidates everywhere would be smart to follow his lead.

Scott’s platform will likely pressure many cautious GOP senators towards opposition to the transgender ideology. That pressure is important because many GOP politicians have been reluctant to challenge elite sympathy for the transgender ideology’s society-wrecking demands. Those demands say the government should force Americans to accept claims by adults and children about their shifting sexual identity, regardless of the damage those claims do to other Americans, civic institutions, or the claimants’ health.

Joe Biden and Democrats have made life more expensive and less safe for families across America. Republicans like Senator Rick Scott have real solutions to put us back on track. From lowering costs and creating jobs, to supporting police and securing the border, Republicans are offering a clear plan to protect and reinvigorate the America we know and love.

Happy #PrideMonth!@GOP is proud to have doubled our LGBTQ support over the last 4 years, and we will continue to grow our big tent by supporting measures that promote fairness and balance protections for LGBTQ Americans and those with deeply held religious beliefs.

The transgender push to transform children and to end single-sex sports — such as swimming leagues for Ivy League women — are driving the public debate against the transgender demands.

“I do believe we ought to be careful about these gender-altering procedures on a child … This is science,” he added.

Scott’s plan follows a recent statement by former President Donald Trump. “We will ban men from participating in women’s sports,” he promised on January 29 during a Texas speech that mimicked a campaign rally. 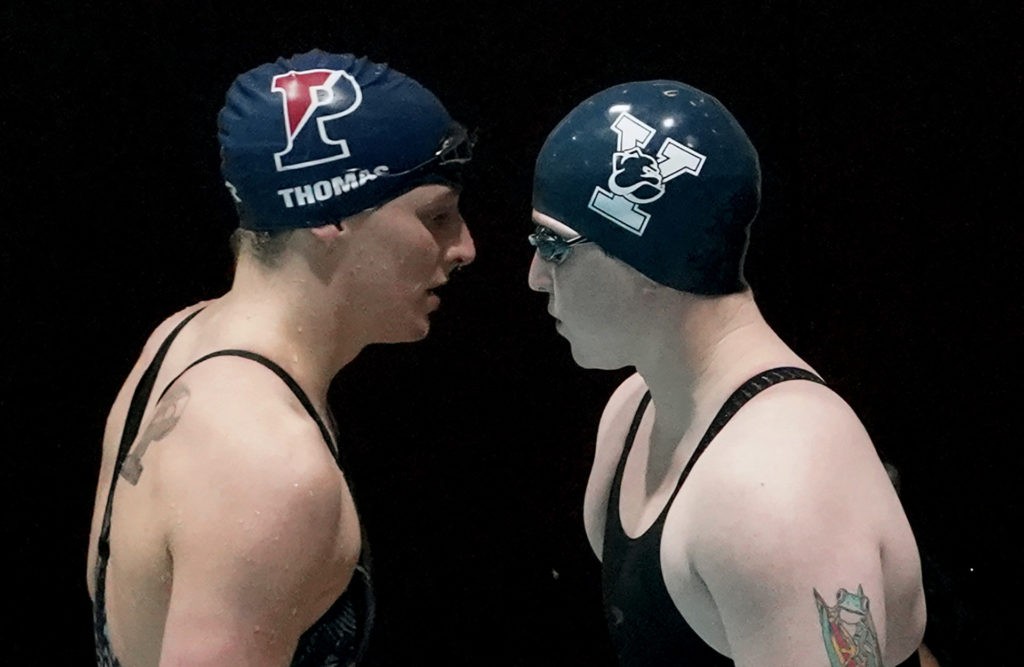 Penn’s Lia Thomas, left, leaves the pool deck as Yale’s Iszac Henig, right, prepares to swim in a qualifying heat of the 100-yard freestyle at the Ivy League Women’s Swimming and Diving Championships at Harvard University, Saturday, Feb. 19, 2022, in Cambridge, Mass. Henig, who is transitioning to male but hasn’t begun hormone treatments yet, is swimming for the Yale women’s team and set a meet record with the fastest qualifying time. Thomas, who is transitioning to female, and swimming for Penn women’s team had the second fastest time. (AP Photo/Mary Schwalm)

He referred to the scandal of Lia Thomas, a transgender woman swimmer for the University of Pennsylvania, saying, “So ridiculous. Did you see the man who was on the swimming team at a certain school that I know very well? The [women’s swimming] record was held for like 11 years. He beat it by 38 seconds.” 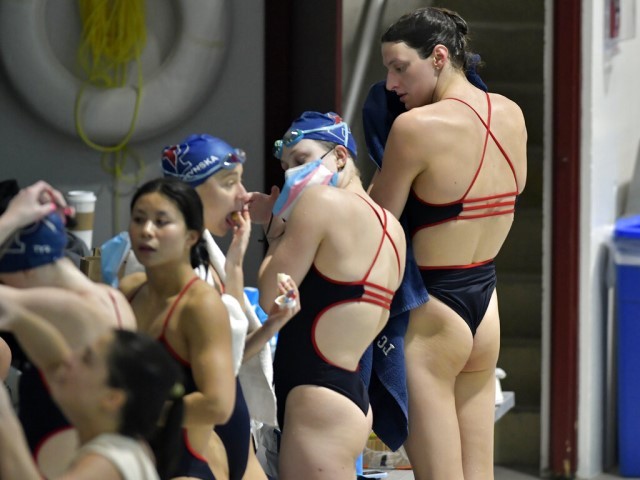 Penn transgender swimmer Lia Thomas, right, dries off after warming up with the team before a NCAA college swimming meet with Harvard on Saturday, Jan. 22, 2022, at at Harvard University in Cambridge, Mass. (AP Photo/Josh Reynolds)

The public has rejected transgenderism’s ideological claim that the reality of sex is subordinate to each person’s choice of her or his “gender identity.” Numerous polls show the public — including liberal women — increasingly rejects the transgender ideology. The new opponents include many liberal-leaning, college-educated women and men who hated former President Donald Trump and voted for Joe Biden in 2020. Even pro-transgender advocates admit they have lost the public argument over sex-switching athletes.

Federal GOP politicians are moving away from initial support for the establishment-backed transgender agenda.

For example, Sen. Tommy Tuberville (R-AL) pushed an amendment to the coronavirus spending bill that would have barred federal funds for universities that allow men to compete in women’s sports.

On January 9, Rep. Elise Stefanik (R-NY) ended her support for the pro-transgender Fairness for All Act bill. Reps. Claudia Tenney (R-NY) and Jeff Van Drew (R-NJ), also withdrew their support for the bill which would make “gender identity” a judicially-enforce civil right against Americans’ single-sex associations, institutions, and community groups.

The bill is strongly opposed by the American Principles Project:

Most Americans, including the vast majority of Republicans, are in agreement that biological males should not have access to women’s spaces or be able to compete in women’s sports. It’s simple common sense. And yet, for some misguided reason, a few GOP members of Congress feel that caving on this issue is the best course of action. Because make no mistake: the Fairness for All Act would open the door to the full evisceration of women’s rights.

In the states, numerous GOP politicians have already voted for legislation to curb the transgender ideology. Others are using their regulatory power to roll back the transgender expansions.
On February 21, for example, Texas Attorney General Ken Paxton issued a legal opinion declaring that transgender-related medical procedures on children are “abuse,” and saying, “The Texas Department of Family and Protective Services has a responsibility to act accordingly.”
“What we really need is a [federal] civil rights style legislative package that addresses [the lack of] parental rights and family formation,” said a statement from Schilling. He continued:

Something big enough that addressed the economics of the family and the rights of parents to protect their kids and raise them. Something with the power of civil rights — maybe even bigger with the state of the American family today. For the first time ever we are below replacement levels and the median age of marriage is now 8 years later than just two decades ago. If we don’t prioritize our families — what do we prioritize? Weed? Video games? A career? I understand people have a hard time finding someone to marry and what makes it more sad is that there’s another person avoiding marriage at all costs for all the wrong reasons. It’s just not sustainable.

“It’s clear that Republicans are finally seeing the political advantage of highlighting Democrat extremism on this issue,” Schilling added. “But with the GOP seemingly poised to take back Congress next year, the question remains: Will they actually do something about it once they retake power? That will be the real test, and it will be critical that conservatives hold them to it.”

The Left continues to attack their fellow Leftist J.K. Rowling for having the audacity to challenge radical transgender ideology. https://t.co/i5ln54x2xx