A fire of unknown origin destroyed the entirety of the National Museum of Brazil in Rio de Janeiro Sunday night, collapsing at least two of the 200-year-old former palace’s floors and destroying most of the items on display, including Latin America’s largest ancient Egyptian exhibit, priceless fossils, and natural artifacts.

Authorities confirmed Monday morning that the museum did not have a sprinkler system or any mechanism to protect it from fires. Two security guards were present at the scene when the fire erupted. On-site reports from Rio de Janeiro indicated that firefighters found faulty hydrants on the scene when they arrived, making it impossible to pump sufficient water into the facility, and that, at some point, the water simply ran out.

The museum was home to one of Brazil’s most prominent Portuguese royal families for most of the 1700s, converted into a museum in 1818 by King of Portugal Dom João VI. It would have celebrated two centuries open had it survived this year. At the time of its destruction on Sunday, it housed 20 million artifacts of natural historical or anthropological value, most not on display: 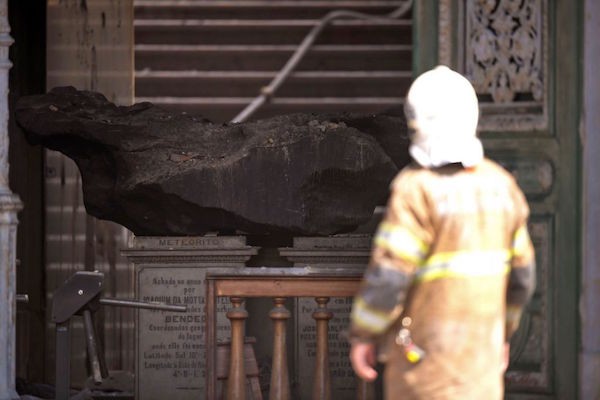 A meteorite is seen amid debris at Rio de Janeiro’s treasured National Museum, one of Brazil’s oldest, on September 3, 2018, a day after a massive fire ripped through the building (MAURO PIMENTEL/AFP/Getty Images).

According to Brazilian newspaper O Globo, nearly 80 firefighters responded to an emergency call at the museum at around 7:00 p.m. local time. The fire raged with nearly no resistance from emergency personnel for hours, however, as the firefighters struggled to get hydrants around the facility to work and had no tools to begin controlling the fire internally. Once the hydrants started to work, firefighters were able to control parts of the fire until reports surfaced that they had either run out of water or lost the pressure necessary to propel the water out of the hoses: 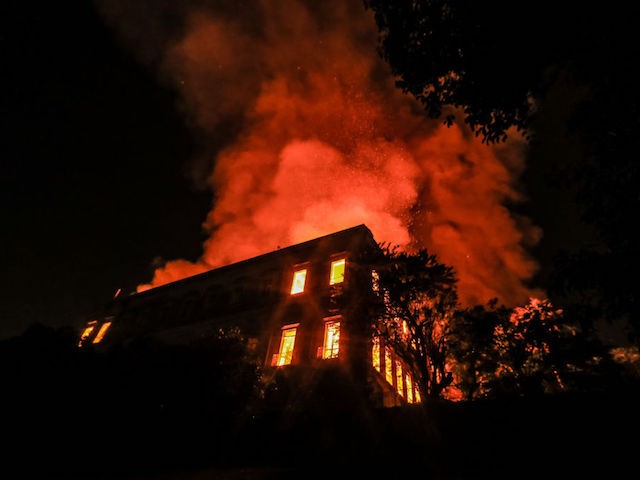 A fire burns at the National Museum of Brazil on September 2, 2018, in Rio de Janeiro, Brazil. The museum, which is tied to the Rio de Janeiro federal university and the Education Ministry, was founded in 1818 by King John VI of Portugal (Buda Mendes/Getty Images). 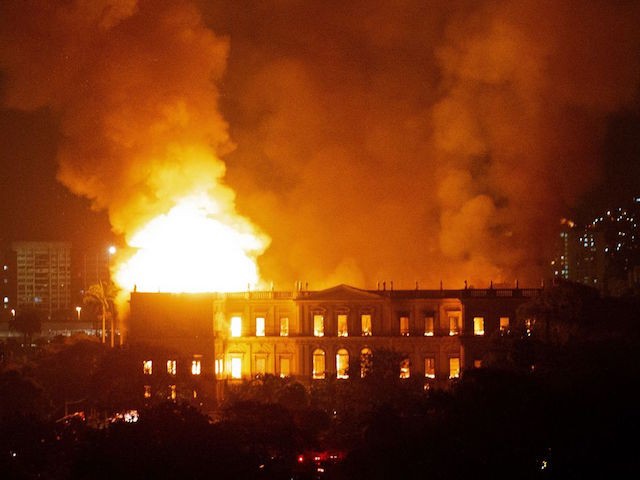 A massive fire engulfs the National Museum in Rio de Janeiro, one of Brazil’s oldest, on September 2, 2018 (STR/AFP/Getty Images). 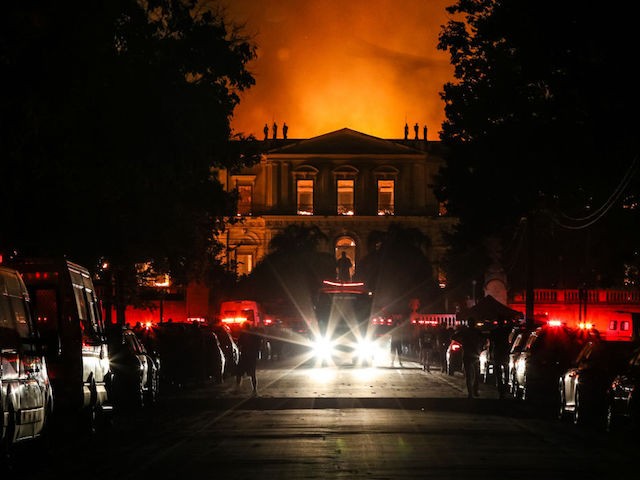 The newspaper note that the fire was “under control” by about 2:00 a.m. Monday local time.

Authorities have not provided any known causes for the fire but note that no injuries have been recorded, as the museum closed at 5:00 p.m. that day, and only the two known security guards and four witnesses were on site.

Folha de Sao Paulo, another Brazilian newspaper, reported on Monday that at press time, firefighters were still combatting smaller embers that kept burning, but they had largely moved on to attempting to recover what they could from the rubble. Officials told reporters the second and third floors of the former palace had completely collapsed into the ground floor, likely destroying most of the artifacts on display.

A museum official confirmed to Folha that Latin America’s largest collection of Egyptian mummies, Brazil’s largest fully assembled dinosaur fossil, and the remains of the oldest known indigenous Latin American were “all destroyed.”

Folha also confirmed with an unnamed security guard at the museum that the facility did not have an on-duty 24/7 fire brigade for emergencies and did not have mechanisms like sprinklers inside to turn on automatically. Anonymous officials told the newspaper the fire likely began on the second floor near the indigenous Brazilians exhibit, though they did not have any inkling as to the cause of the fire.

O Globo reports that the deputy director of the National Museum, Cristiana Cerezo, “threw herself to the ground when she arrived” after the fire, crying. Some museum workers told O Globo the fire may have likely been exacerbated by “many flammable products” kept inside, which they had planned to move at some point but never got around to.

President Michel Temer issued a statement on Twitter, calling the loss of the museum “incalculable.”

He wrote in Portuguese, “200 years of work, research, and knowledge were lost,” adding, “We cannot measure the value of our history. … [I]t is a sad day for all Brazilians”:

Many Brazilians have reacted to the fire with anger, highlighting the years of negligence on the part of government authorities in maintaining a functioning fire department in Rio de Janeiro and appropriating sufficient funds to the museum itself. Protesters attempted to enter the museum grounds on Monday afternoon, demanding more funding for historic preservation and education. Police responded by using tear gas and pepper spray to keep the protesters from entering the museum site, which was still not safe given the tenuous status of what remained of the building: 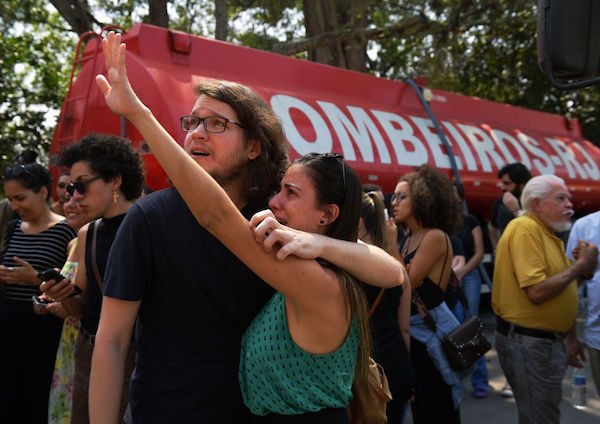 In a brief commentary at the Estadao newspaper, titled “Who Set the Museum on Fire?” writer José Nêumanne expressed similar disgust at the lack of funding for preserving historical sites.

Criticizing Temer for the “cynicism” of pretending to care in his statement on Monday, Nêumanne wrote:

The fire that destroyed the Quinta da Boa Vista National Museum in Rio de Janeiro is absolutely unbelievable news, but never surprising, as it results from centuries of indifference, insensitivity, and incompetence of a state whose officials turn only to the prey of public coffers used only to illicitly enrich them and perpetuate this tragic reality.

“The tragedy of the National Museum results from neglect, negligence, incompetence, insensitivity, stupidity and lack of public spirit of the leaders of the Brazilian State, who are only concerned with squandering public patrimony,” Nêumanne added.

Marina Amaral, a Brazilian historian who specializes in colorizing historical photographs, narrated most of the fire from her Twitter account, noting bitterly the negligence that led to firefighters being able to do little to stop the complete destruction of the facility.

If you are not Brazilian, it may be difficult for you to fathom the fact that the museum had absolutely no mechanisms that could possibly help extinguish the fire.

Not even the hydrants were working properly when the fire brigade arrived.

That’s what’s left of so many important documents for our history.

I’m so sad I could not sleep yet. pic.twitter.com/02fcBbPcry

Amaral accused the government of being more concerned with wasting money on international sporting events than its own history: “building gigantic stadiums for the World Cup, which were subsequently abandoned, is what really matters here.”

The then-leftist government of President Dilma Rousseff faced large protests during the construction of large sports facilities for both the 2016 Rio de Janeiro Summer Olympics and the 2014 FIFA World Cup. During the Olympics, the government left police stations without the money to pay for toilet paper, forcing them to ask for local donations, as well as other severe shortages in funding. During one protest at Rio’s international airport, police and emergency workers held up a large sign to arriving tourists, reading, “Welcome to Hell: Police and firefighters don’t get paid, whoever comes to Rio de Janeiro will not be safe.”

Many of Rio de Janeiro’s sports facilities have since been abandoned to looters and neglect. The city’s economics have not improved significantly, and in February, the federal government sent in the military to take over managing the police and fire departments.

The total loss from Sunday’s fire has not been calculated at press time.