Daniel Llorente, a Cuban pro-democracy dissident forcibly expelled to Guyana for “crimes” like waving an American flag, told Breitbart News he fears for his life in Guyana but has no way of leaving.

Llorente neither chose to immigrate to Guyana nor did he flee. He was forced at gunpoint to buy a one-way plane ticket and put on a flight by Cuban state security agents. Guyanese officials never processed him at customs as foreigners properly are. He is neither a refugee nor an immigrant. He does not legally exist in Guyana.

The United Nations High Commissioner for Refugees (UNHCR) office certified Llorente as a verified asylum seeker, offering him a veneer of legality and preventing Guyana from deporting him to Cuba. His certification does not offer stable migrant status or allow him to work in the country, however, making a normal life there impossible.

“It was never my intention to leave the country [Cuba],” he told Breitbart News in conversation Tuesday. “My intention since they imprisoned me unjustly was to wage a peaceful [campaign] directly against the dictatorship.”

“They gave me two options: leave the country peacefully, or go to jail,” he recalled.

Llorente disappeared for days before finally resurfacing in Guyana, as Breitbart News revealed in May 2019. Since then, he has been able to make ends meet with help from the United Nations and odd jobs offered by a Guyanese friend, but his U.N. help expires in May and the Guyanese government has done nothing to offer him any reasonable legal status — either expelling him or letting him work.

Llorente said that he has struggled to seek aid or find work in Guyana in part because Cuban government agents have slandered him to aid organizations and potential employers.

“They put in my dossier that I was the worst, so any organization that tries to help me, when they look at my dossier, they take me for a criminal,” Llorente said.

Llorente expressed fear for his life. He noted that he had recently been the victim of a robbery but managed to run away before being hurt.

“The situation in this country is critical, strangers have no safety, on February 20, they killed a Cuban and nothing happened,” Llorente noted. Otredis Duarte González, a 34-year-old Cuban national, was shot to death that day, allegedly by a gang of armed men on motorcycles. “This is not a safe country for me.”

“If their [the Castro regime’s] strategy at any moment becomes to eliminate me – and I am sure that this is the case because I expect anything from them – they know that this is a country that, if I can’t get out of there, I’ll have to go through the [U.S. southern] border and that is also a place where they can disappear me,” Llorente said. “I can’t give them the chance.”

In a letter to U.N. Secretary-General Antonio Gutérres shared with Breitbart News, Llorente is now asking the agency for help in finding a way to exist legally, and permanently, somewhere on earth. His letter, reproduced below, asks only for “a clear solution to my situation.”

“An official at the U.N. told me on February 20 that they have no solution to my case,” Llorente lamented to Breitbart News. 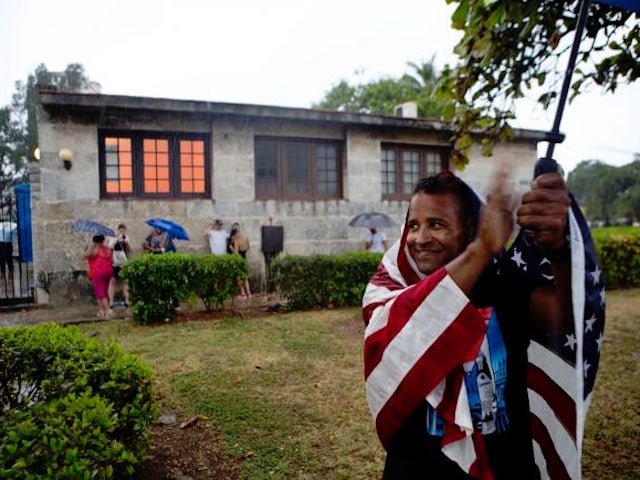 Llorente would like to come to America as he has long adored the country, he said, but he refuses to do so illegally. At the U.S. embassy in Georgetown, he says he was told that embassies may no longer process asylum applications. Llorente has not yet attempted to file for refugee status, which U.S. Citizenship and Immigration Services (USCIS) states can be applied for “only from outside of the United States.”

He also attempted to reach out to Mexican officials for a humanitarian visa, but the embassy would not see him on two occasions, he said.

He repeated his adoration for the United States to Breitbart News, however, sharing photos of himself in Georgetown, Guyana, waving his American flag. He has also affixed images of President Donald Trump on some of his clothing and his bicycle.

“Even I sometimes surprise myself seeing how much I really love the U.S.,” he told Breitbart News, adding of Trump, “I feel a great respect and admiration for him because I see his desire to do good, and he is taking serious measures to control security in his country and bring an end to dictatorships in [Latin] America. I am convinced God lifted Donald Trump up as president to bring order to the world.”

Llorente’s Christian faith is inextricably tied to his admiration of the United States and disdain for communism. Speaking to Breitbart News upon his arrival to Georgetown last year, Llorente said Cuban government agents allowed him to bring only one bookbag with him, which he used to carry a Bible, a copy of the U.S. Constitution, and a book on American history. He wore only the clothes on his back.

Llorente spent nine years in prison in Cuba on false charges of “obstruction of justice” for displaying an anti-communist poster in 2002. Upon leaving prison, he took to independent activism and branded himself “the man with the flag,” waving an American flag publicly to defy the communist regime.

Llorente reached international prominence in 2007 when he interrupted that year’s May Day parade, a celebration of Marxism on May 1, by running ahead of the scheduled May Day parade waving an American flag. Cuban state security agents beat him on camera and the Castro regime forced him into a mental institution where he says he was drugged and tortured.

Bowing to international pressure, the Cuban regime freed him from the mental institution, regularly detaining him to keep him from interrupting prominent communist events. In May 2019, authorities detained both him and his son Eliezer to prevent them from staging another protest at the annual May Day protest.

Then suddenly, abruptly, Cuban state security agents forced him to buy a one-way plane ticket to Guyana. If he did not obey, Llorente said, he was told they would “disappear” him, suggesting lifetime imprisonment or death.

Llorente’s case is not unique — under pressure from international human rights organizations, the Castro regime is opting for dumping problematic dissidents in third party countries where Cubans do not need visas to travel; Guyana appears to be a particularly popular destination. The NGO Cuban Prisoners Defenders, which fights for the rights of Cuban dissidents, published a study in June 2019 revealing that forced exile cases “occur at the scale of hundreds annually, and that these have affected thousands of human rights activists, independent journalists, dissident artists, religious leaders, and other organized pacific groups. The number of those not belonging to any group, and those who no one has heard news of, could [increase] the cases to many times the number deduced by this study.”

Llorente does not belong to any organized Cuban dissident group.

Below, the letter Llorente has written to U.N. Secretary-General Guterres:

My name is Daniel Llorente Miranda, minister and ambassador of Jesus Christ.

At the 74th United Nations General Assembly, President Nayib Bukele [of El Salvador], during his first remarks to such an important event, declared publically the following: “The United Nations has strong economic resources to solve the greatest problems in the world, but the format is obsolete.”

It is worth noting that the dictatorship in Cuba has dragged on for 60 years. It is not necessary to repeat what is going on daily in Cuba; and the U.N. itself, the organization that you preside over, has been offering moral and financial support all these years and continues to do so through NGOs that only serve to help the Castro dictatorial mafia. I don’t expect to be the one to change things.

On February 20, 2020, they killed a Cuban on his way to work and nothing happened. Guyana is not a safe country for foreigners. I had, just that day, mentioned to the officer helping me at the United Nations High Commissioner for Refugees (UNHCR) office my fear of continuing to live in Guyana. They have already tried to rob me and, thank God, I ran and they could not catch me. I can say categorically that I live without calm and unhappy in this country.

For that reason, referring to the Preamble of the Universal Declaration of Human Rights of your organization, which you vowed to respect and obey, I request as per this universal law a clear solution to my situation as per Articles 2 and 9 and the right to travel freely and choose the territory of a State, as per articles 13 and 14.

I hope for a solution to my case, with confidence in your good will of never giving up ever and the commitment to what you said in your message on United Nations Day: “to not leave anyone behind, and to defend the dignity of all and for the good of all as United Nations.”