Daniel Llorente Miranda, a Cuban dissident forcibly removed from the island and stranded in Guyana for over a year, tells Breitbart News he has taken once again to protesting, this time against both the communist regime in his homeland and those he sees as enablers in his new home.

Llorente attempted to protest in front of the Cuban embassy in Georgetown, the Guyanese capital, last week, peacefully holding up signs with anti-communist slogans and statements against current Guyanese President David Granger, currently embroiled in an election controversy after widespread allegations of fraud. Llorente told Breitbart News on Tuesday that police removed him from the public sidewalk outside of the Cuban embassy and told him he was not allowed to picket there. Challenged to present him the text of the law that bans him from protesting there, police did not respond to Llorente.

Llorente became famous in Cuba for his use of the American flag as a symbol of protest against the dictatorship. On May 1, 2017, Llorente interrupted the planned International Workers’ Day parade – the largest on the island, meant to observe the Marxist holiday “May Day” – by running in front of the beginning of the parade and waving an American flag. Multiple plain-clothes communist agents were filmed grabbing Llorente and beating him in front of a crowd of thousands. Cubans refer to him as “the flag man.”

After a year in Cuban regime custody – much of it in the notorious torture center known as “Mazorra,” which is used for political dissidents deemed mentally ill – Llorente disappeared in May 2019. Days later, he resurfaced mysteriously in Georgetown, Guyana. He maintains that Cuban regime agents abducted him and forced him on a one-way flights, one he did not wish to take, and threatened him with abuse, prison, or death if he ever returned to Cuba.

He told Breitbart News that he chose to protest against both the Cuban and Guyanese governments and walked to the embassy of his old country on June 22, carrying a poster board with various signs on them. Some of the signs carried the text of Biblical excerpts referring to his namesake, Daniel – Llorente is a fervent Christian – while another bore the image of President Granger with phrases like “not honest” and “corrupt.” His poster also condemned the “slavery” that he has said he has endured in Guyana after being scammed into manual labor jobs and refused any pay.

As Llorente has no legal status in Guyana – he is legally present only because the U.N. Office of the High Commissioner for Refugees (UNHCR) has issued documentation certifying that he is a refugee with reasonable fear of persecution in his home country – he has no legal recourse in such cases. 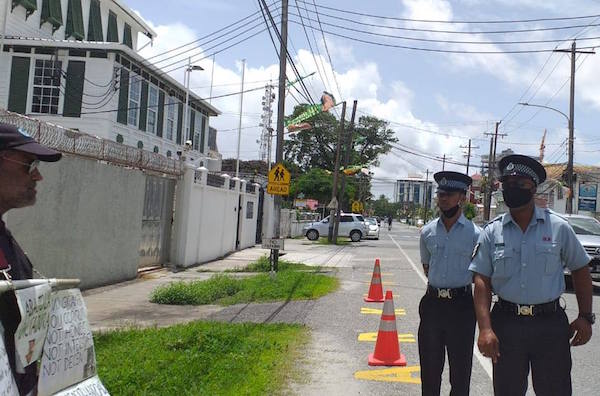 “Guyana is not a safe place for foreigners. There are a lot of armed criminals here, every once in a while there are cases of robberies and other ill-treatment of foreigners. Foreigners who are, for the most part, refugees receive the lowest pay for the hardest work,” Llorente told Breitbart News. “David Granger is a friend of the Castros, therefore I declare that anyone allied with a tyrant is an accomplice and his corruption in the [latest] elections shows it.”

“To the Cuban dictatorship, I want to remind them that I will not tire in publicly denouncing their lies and disdain for the people of Cuba,” he added.

A video of Llorente’s protest shows him peacefully on the sidewalk outside of the Cuban embassy. He appears to get into a verbal disagreement with someone standing outside the embassy door, calling the Cuban government “a bunch of liars” and warning that he should, on paper, have legal rights to a public opinion now: “This isn’t Cuba, this is Guyana, understand?”

Police nonetheless urged him to leave, which he did to avoid a confrontation.

“I was there more or less for an hour because a police officer came and told us to leave. Yesterday [June 29], I went to the police requesting the text of the law that prevents me from protesting peacefully,” Llorente told Breitbart News. “I submitted a letter and they told me that they would call me, but they have not yet, despite the fact that I went today personally and asked for a response.”

The dissident, a loud supporter of President Donald Trump who arrived wearing a homemade Trump shirt after his flight from Cuba, also told Breitbart News that he is concerned that police would not protect him if he is attacked for his political views regarding the United States. He claimed locals have told him he “shouldn’t be going around with a photo of Trump on my bicycle because I could have problems.” Llorente decorated the bicycle he managed to collect enough money to buy with American, Cuban, and Guyanese flags and a large printed-out photo of Trump. 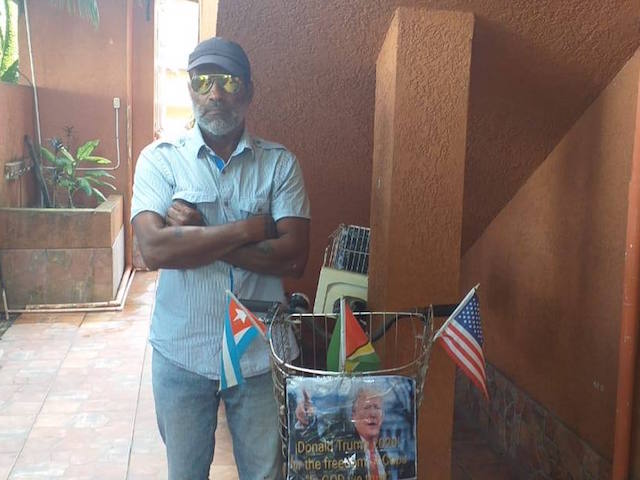 “For a while, people have been insulting me in the street for having the photo, but I don’t care,” Llorente said. “I’ll keep going on no matter who doesn’t like it. Up to now, thank God, nobody has attacked me, just insults.”

The dissident is currently surviving thanks to a UNHCR stipend, regularly renewed given his lack of prospects in Guyana. He is a taxi driver by trade and has expressed desire to find stable work after finding manual labor gigs as often as possible, some of them resulting in no pay.