CARACAS – It has now been four months since the Chinese coronavirus lockdowns began in Venezuela with no apparent end in sight. The Maduro regime recently extended lockdowns again last week.

We now live under an even more authoritarian reality masked under the pretense of public health and the evidence suggests it is doing more harm than good.

In a previous entry, I mentioned how the fierce lockdown was an exercise in how much Maduro’s regime could openly get away with — and in this past four months they’ve gotten away with a lot. Some of it is familiar: arrests for anti-socialist tweets, government-sanctioned snitching, the horror of potentially having to use the Venezuelan healthcare system. Added to that in this new reality are curfews for all, bans from leaving the neighborhood, and the imprisonment of an untold number of people in government-seized hotels being used as quarantine centers.

According to the socialist regime, Venezuela has documented over 11,000 cases — huge emphasis on the word “according” as contesting Maduro’s numbers can get you arrested here. The same goes for any opinion regarding the announcement that several of the regime’s figureheads have been “infected” with coronavirus, including top socialist head honcho Diosdado Cabello. Police arrested a prominent former Chavista public figure for a quote-tweet directed at a socialist politician, wishing him good health so he can someday face justice for his actions.

Due to the alleged surge in cases, the city of Caracas is once again in a “Level 1 Quarantine” that severely restricts commercial activity and our overall livelihood. Inter-district transit is banned unless you have the corresponding safe passage documents (always available, of course, through a bribe). Barricades have been placed to enforce these restrictions in certain areas, such as El Valle.

Since he cannot incur the wrath of our new Chinese overlords, Maduro has referred to the coronavirus as the “Colombian virus” not once, but twice. Even the website of the People’s Ministry for Health refers to it as such, whilst placing the blame on people who “enter the country through illegal roads.” No scientist anywhere in the world has produced evidence that the virus originated in Colombia; the earliest documented cases occurred in Wuhan, China.

The regime’s baseless accusations over the “Colombian virus” are a facade meant to deflect any accountability for the obliteration of our healthcare system. A socialist regime can’t be the hero without a villain, just so happens that it’s Colombia’s turn this time around.

Those unlucky enough to test positive for the “Colombian virus” are effectively imprisoned in hotels that the socialist regime has arbitrarily seized. Venezuelans returning from abroad also receive this treatment, forced into quarantine shelters that lack even the most basic sanitary and hygiene measures, compared to concentration camps.

Only the socialist regime elite and the military have access to real healthcare, though even the limping private health sector is facing oxygen shortages. Venezuela once claimed to have access to a Cuban “miracle cure” – Interferon, which scientists agree has shown no visible potential to cure coronavirus and may kill users – but Maduro quietly stopped mentioning it over time. In Venezuela’s real healthcare system, the one normal citizens have to use, friends of doctors are actively seeking ways to smuggle PPE to doctors they know, as the government stopped trying to find enough for its medical workers.

To soften public anger against the regime, Maduro has taken to demonizing Venezuelan citizens who traveled abroad and came home, referring to them as “bio-terrorists.” Maduro himself has publicly urged the persecution and capture of Venezuelans for traveling and returning home — even though he personally spearheaded a campaign urging migrants to return to the “Fatherland.”

Also in the crosshairs are violators of Venezuela’s strict quarantine rules – many of which, like a ban on riding bicycles, have no basis in science or medicine and have no international analogs.

You can’t expect people to simply “stay at home” for over four months, not when a staggering 96 percent of the country lives in extreme poverty. Not everyone here can brute force their way out of all of the facets of the ongoing collapse of Venezuelan socialism (such as power, water, food, gasoline, et al) through the use of foreign cash. People need to work because their lives depend on it.

Since the Venezuelan banking institutions have remained closed during these past four months of quarantine, the Venezuelan bolivar (or what’s left of it) has become a sort of digital currency. I personally haven’t seen a bolivar banknote in months beyond a stack of useless 100-bolivar ($0.00042) notes that I have on my desk; almost every cash translation is now done in foreign currency.

The extreme lockdown measures combined with the somehow worsening economic collapse of the country give Maduro plenty of opportunities to create enemies of the state.

The Strategic Command Operations of the Bolivarian National Armed Forces, through its Twitter account, invites Venezuelans to snitch on those that have entered the country through “illegal roads.”

Parties are now a crime, and you’re expected to report them. 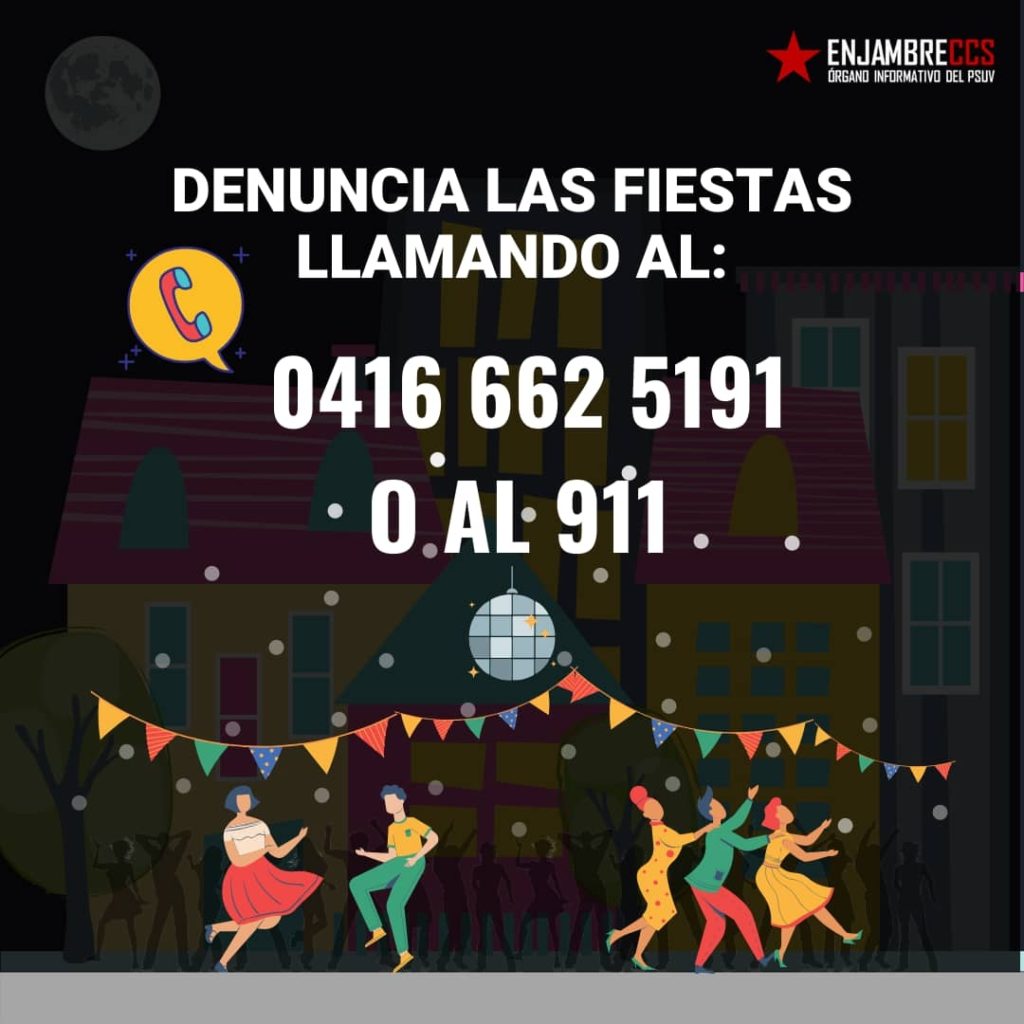 The Chinese-inspired “Fatherland” system – which already processes a large amount of data, including the distribution of handouts and gasoline quotas – is now also being used to control people in times of quarantine. The system periodically requests personal information from its users and occasionally asks if you know someone who has entered the country.

The Fatherland system asks users for blood type and questions on symptoms. The introduction paragraph reads: “President Nicolás Maduro and the bolivarian government of Venezuela is taking measures to diminish the impact of COVID-19 in the national territory. Success in facing this Coronavirus is based in implementing distancing through social and collective quarantine to cut the chain of transmission. The Fatherland System is being used as an instrument in the prevention, communication, and pursuit campaign against this virus. We count on the conscience of the citizenry and t he will of all to confront this pandemic together.” (via Christian K. Caruzo)

To say that I personally feel trapped here would be an understatement, more so after the past days. I am more afraid of the regime’s mishandling and mistreatment of the infected than the virus itself because, in this case, the cure is way worse than the disease. Maduro has outright said we’ll never return to the old normality — a rare promise from the dictator that I expect him to keep.