The Venezuelan polling firm Meganálisis, in its November 2020 national survey, predicted that over 80 percent of eligible voters in the country will not participate in the December 6 legislative election. If the prediction comes true, it will mark the lowest turnout in any election in Venezuelan history.

Socialist dictator Nicolás Maduro organized elections to replace all seats in the National Assembly, the federal legislature, scheduled for next weekend. Maduro does not have the legal power to do so – he has not been legally president of Venezuela since January 2019 – but, as he controls the armed forces and every government agency, he has the power to execute something resembling a national referendum.

Maduro claims the presidency of the country after “winning” the May 2018 presidential election, which few states in the free world recognized as free and fair. In that election, Maduro banned non-socialist candidates from running for office and used both state force and illegal colectivo socialist militias to intimidate voters. Only 46 percent of eligible voters participated in that election, the lowest number in history.

Maduro has organized at least five rigged elections in Venezuela since inheriting the presidency from dictator Hugo Chávez in 2013.

The secretary-general of the Organization of American States (OAS), Luis Almagro, asserted this month that holding a free and fair election in Maduro’s Venezuela is impossible and urged the world to reject the results of the December 6 election.

Meganálisis, which conducts regular nationwide surveys on current events and attitudes towards the socialist regime, asked respondents if they were planning on voting on December 6. Most, 65.1 percent, said they were not, which only about a fourth said they were. Another 9.6 percent said they did not know. 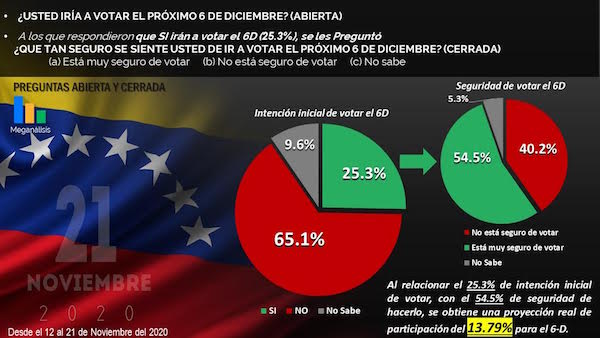 The pollster stated that it expected a 13.79 percent voter turnout rate on Sunday based on the level of surety from those who considered voting.

Other questions Meganálisis proposed to respondents – made up of adults in Venezuela’s 24 states questioned between November 12 and 21, 2020 – suggested an extreme lack of hope in the dire situation the country has endured since the rise of socialism at the turn of the century. About 75 percent of those asked said they did not expect the elections will “improve the country.” As in other polls this year, Meganálisis documented high levels of rejection of both Maduro and the legal president of Venezuela, Juan Guaidó, who has failed to use his legitimacy in any meaningful way.

Guaidó regularly uses social media to deliver speeches online and has urged groups like the European Union to funnel money to him and not Maduro in an attempt to regain power, but has failed to convince any visible portion of the Venezuelan armed forces that he is their commander in chief, though he does constitutionally hold that title.

Asked, “Do you think Juan Guaidó is an important politician in the solution of the problems of the country or a hindrance?” nearly 90 percent of respondents identified Guaidó as a “hindrance.” Less than ten percent said he was “important.” The results echo responses Meganálisis received in its July poll, where it asked Venezuelans if they wished to see President Donald Trump continue to support Guaidó. About 80 percent said no.

In the November poll, 81.2 percent of Venezuelans also said that they wanted to see Maduro and socialist chavismo leave power, indicating once again that opposition to Guaidó did not translate into support for Maduro or vice versa. This despite the fact that Maduro, increasingly attuned to the national rejection of Guaidó, has attempted to use it to weaken the morale of those who oppose his regime.

“Why did Trump fail in Venezuela? Trump’s failure in Venezuela cost him the election. The man guilty of the defeat of Donald Trump has a first name and last name in Venezuela – his name is Juan Guaidó,” Maduro said. “And … [t]he day that broadcasters in the U.S. announced that projections, I think it was November 7, showed Joe Biden to be the winner, five minutes later Guaidó the rat recognized him on Twitter, he betrayed Donald Trump, who is his father.”

“The creator of the Frankenstein, of the little monster, is named Donald Trump. And he betrayed him! He stabbed his father, he committed patricide. … He didn’t even wait a day!” Maduro teased.

Maduro’s convocation of election for the National Assembly will result in the first elections for seats to that branch of government since 2015, when opposition parties won an overwhelming victory against Maduro’s United Socialist Party of Venezuela (PSUV). Following that defeat, Maduro announced that he would not abide by any legislation from the federal lawmaking body and instead create an unconstitutional parallel parliament, the “national constituent assembly,” tasked with writing a new constitution. Shortly before announcing National Assembly elections this year, Maduro revealed that the “constituent assembly” would not be writing a constitution at all and that most of its members would run for National Assembly seats.

The election will be regulated by Maduro’s “Electoral Council,” a federal agency run by Maduro loyalists who tally the votes on the national level.

“This cannot be accepted by the international community. We must be clear about it, reject that idea and any political opportunity to try and validate that process,” OAS chief Luis Almagro denounced this month. “It is completely unacceptable from every point of view. These elections are one more mechanism of impunity and cooptation of the powers of the state.”