El Salvador’s government plans to build a “Bitcoin City” at the base of Conchagua Volcano in the country’s southeast in 2022, El Salvador’s La Prensa Gráfica newspaper reported Saturday, noting the city will be designed to harness the volcano’s geothermal energy to mine cryptocurrency.

El Salvador President Nayib Bukele announced plans to build the innovative metropolis during a speech in Mizata on November 20. Nayib spoke to a crowd gathered in the coastal resort town to mark the end of a weeklong “Bitcoin Festival” in El Salvador.

“It would be a legal municipality, with [a] mayor and everything,” President Bukele said of the planned “Bitcoin City.”

Bukele said his administration was inspired to build the city based on a pre-existing model of municipalities energized by geothermal power plants in El Salvador, specifically in the district of Usulatán. Two geothermal plants currently operate in Usulatán, which is located a short distance west of Conchagua Volcano. El Salvador’s government plans to power “Bitcoin City” through nearby Usulatán’s geothermal plants before eventually building a new geothermal plant for the municipality that will use energy harnessed from Conchagua Volcano. The stratovolcano harbors active areas on both of its two peaks, though it has never erupted according to geologists. The volcano’s energy will also be used to mine Bitcoin, Bukele said Saturday.

“Mining Bitcoin and other cryptocurrencies is done using sophisticated computers to solve complex mathematical problems. It is costly, difficult and takes up large amounts of energy,” according to the BBC.

El Salvador’s government will finance its new city “partly by an issue of $1 billion in sovereign bonds backed by the cryptocurrency [Bitcoin],” the Financial Times noted on November 21. 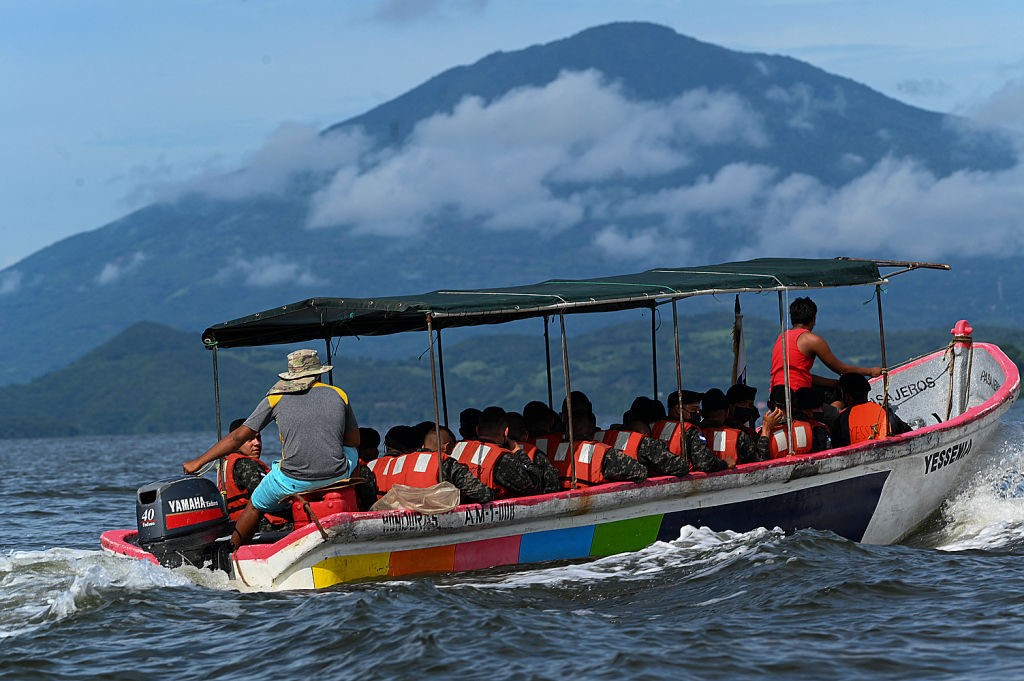 Army soldiers and members of the Honduran Naval Base head to Conejo Island (in the background the Conchagua volcano, on the Salvadoran side), to raise the national flag, during the celebration of the National Flag Day. (ORLANDO SIERRA/AFP via Getty Images)

“The bonds will be US dollar-denominated 10-year bonds, with half the funds converted to bitcoin and the other half used for infrastructure and bitcoin mining,” Samson Mow, the chief strategy officer of the blockchain technology company Blockstream, said on stage with Bukele in Mizata on November 20.

“The bonds will be issued in 2022 and the construction of the city … will begin 60 days later,” according to El Salvador’s federal government.

“Bitcoin City” will have “no property, income or capital gains taxes,” according to Bukele.

“Its infrastructure and other costs will be funded by a sales tax and money raised by the bond issues,” the Financial Times quoted the president as saying on November 20.

El Salvador became the first country in the world to adopt Bitcoin as a legal tender on September 7. Bukele’s administration said it spearheaded the action primarily to retain an estimated $400 million in financial fees lost in remittance transactions each year when El Salvadorans send money home from abroad through traditional wire transfers.

Remittances account for roughly 23 percent of El Salvador’s GDP. The country has used the U.S. dollar as its official currency since 2001 and estimates that over 2.5 million Salvadorans live abroad, mainly in the United States. Salvadorans living and working in the U.S. sent almost $6 billion home to El Salvador last year.

The government of El Salvador established a new digital wallet app, called “Chivo,” in September after legalizing Bitcoin as a legal tender. San Salvador issued $30 in Bitcoin to every citizen through the digital wallet as an incentive to download the new app.

“Between September and October, Salvadoreans abroad sent about $32 million in remittances back home using the Chivo Wallet, the country’s Central Reserve Bank chief said recently. That represents about 2.5 percent of all the remittances sent in those months,” the Financial Times observed on November 21.