Ecuador President Guillermo Lasso declared a nighttime curfew in Quito on June 20 as the indigenous lobby’s caravan arrived in the national capital. The conservative leader additionally extended a state of emergency in place since June 18 “in the provinces of Pichincha (whose capital is Quito), Cotopaxi and Imbabura, to the Andean Chimborazo and Tungurahua, and the Amazonian Pastaza,” Semana reported on June 21.

“This decision protects the well-being of citizens against violence. At the same time, the rights of those who demonstrate peacefully are protected,” Ecuador’s federal government said of the measures via its press secretary. 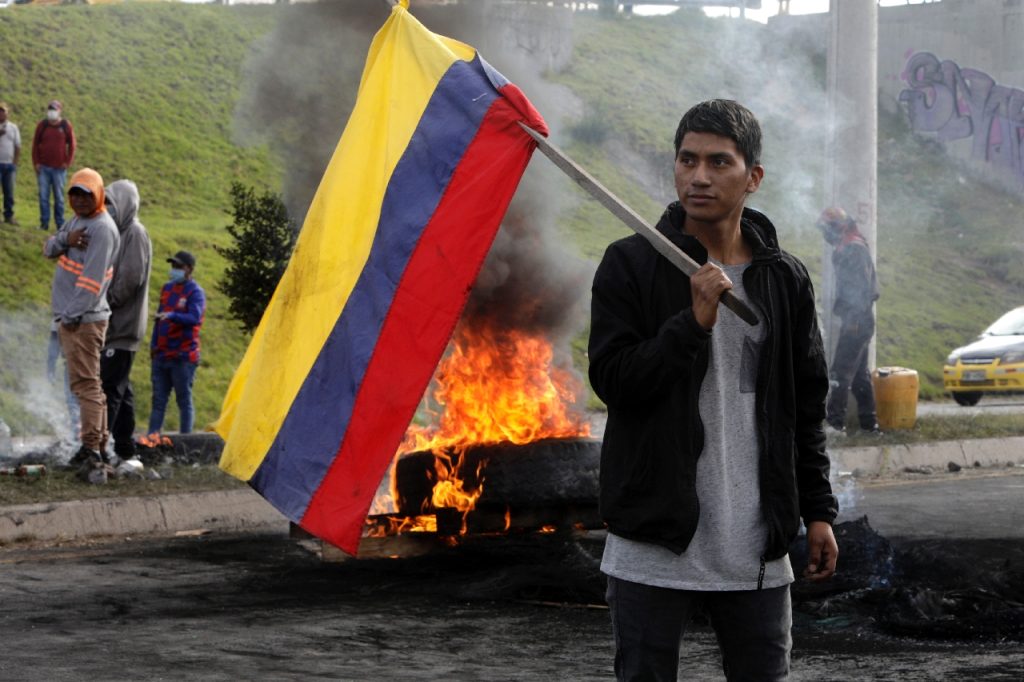 Demonstrators block part of the Ruta Viva highway, that leads to the Mariscal Sucre airport, in the framework of indigenous-led protests against high fuel prices and living costs, in Quito on June 17, 2022. (Photo by CRISTINA VEGA RHOR/AFP via Getty Images)

“We cannot allow a few violent people to prevent millions of Ecuadorians from working. We are not going to allow people to face off against people. I am here to defend Quito, every family in the capital and the country,” President Lasso said in a nationally televised address on Monday night, as quoted by the Buenos Aires-based news outlet Infobae.

Lasso referred to an indefinite nationwide strike ordered by CONAIE on June 12, ostensibly to demand several financial concessions from Ecuador’s federal government, including “setting the price of a gallon of diesel at $1.50 and that of regular gasoline at $2.10,” according to Infobae.

CONAIE’s dictate included a demand for several thousands of mainly indigenous people to march on Quito. This massive march has caused violent riots in at least six provinces over the past eight days and forced the closure of at least “80 sections of highways blocked by the protests,” Infobae observed on Monday.

The Argentine news outlet described caravans of indigenous protesters carrying “weapons including sticks and shields” marching near Cutuglagua, a parish located 18 miles south of Quito, on their way to the national capital on June 20.

“This Monday, Ecuador celebrates a week since the strike began and has already left millions in losses for the productive and tourist sectors, which have been mainly affected by road closures,” Infobae reported on June 20.

“The roadblocks have prevented the trucks that transport vegetables and fruits from the Sierra [mountain range] to the Ecuadorian coast from circulating. The consequences, after seven days of route closures, are beginning to be felt in the supermarkets of Guayaquil, where the hangers of these products are empty,” according to the news outlet.

CONAIE’s caravan escalated its demands on Monday night, calling for President Lasso’s ouster despite his efforts to meet the influential lobby group’s requests. The organization’s 10-point ultimatum includes calls for “food price controls and a commitment to renegotiating the personal bank loans of about four million families” in addition to the call for fuel price decreases, according to Agence France-Presse.

“The powerful Confederation of Indigenous Nationalities of Ecuador (Conaie) — [is] credited with helping topple three presidents between 1997 and 2005,” the news agency noted on Monday.

CONAIE’s influence on Ecuadorean politics seems outsized considering native people account for a minority (one million) of the country’s population of 17.7 million.