The video drew the criticism and mockery of many across social media — including Chavez’s oldest daughter, María Gabriela Chávez, who described it as a “lack of respect” for her late father.

The piece of socialist propaganda animation was presented during the anniversary event of the “Diego Maradona Sportscenter,” built by the Maduro regime in 2021 and named after the far-left Argentine soccer legend who died of a heart attack in November 2020. In life, Maradona had openly expressed a fierce hatred of the United States and had become a key ally of both Venezuela’s socialist regime and Cuba’s communist Castro regime.

“Together with our brother [Oil] Minister Tareck El Aissami, we wanted to pay homage to Diego Maradona on the date of his physical departure and, of course, to our President Maduro for his guidance on this subject,” Gov. Rafael Lacava said during an event presenting the strange cartoon on Saturday. “Venezuela will always thank Diego for his friendship and solidarity with us and especially with Commander Chávez and with our brother Maduro.”

Lacava, governor of Carabobo state — whom the New York Times described in March as a “cosmopolitan” technocrat — was sanctioned by the U.S. Department of Treasury for his involvement in corruption and in blocking the delivery of humanitarian aid to Venezuelan citizens in 2019. The U.S. sanctioned him alongside Venezuelan oil minister and drug kingpin Tareck El Aissami, long accused of having ties to the terrorist organization Hezbollah and on whom the U.S. Department of State has an open $10 million bounty.

The approximately two-minute video features a “superhero” illustration of Lacava that features the “Dracula Bat” imagery he has co-opted for his own personal branding.

The governor is shortly joined by Maduro, depicted with heroic attire despite him having his own socialist superhero alter-ego, Súper Bigote (“Super Mustache”).

The duo is joined by the ghost of Hugo Chávez, portrayed as an angelic figure featuring his characteristic military red beret, who “descends” from Heaven, spreading his wings. Chávez is then joined by Diego Armando Maradona, also shown as an angel but wearing the Argentine National soccer team’s uniform and his traditional number ten.

The quartet then proceed to have a crudely animated soccer match culminating in Maradona scoring a goal by punching the ball — a reference to the “Hand of God” incident in which Maradona scored a goal against England in a FIFA World Cup quarter-finals match in 1986 by using his hand. The goal itself was illegal under soccer’s rules but was controversially deemed valid by the match’s referees; Maradona would later joke that he did not use his hand, but that the “hand of God” intervened on Argentina’s behalf. 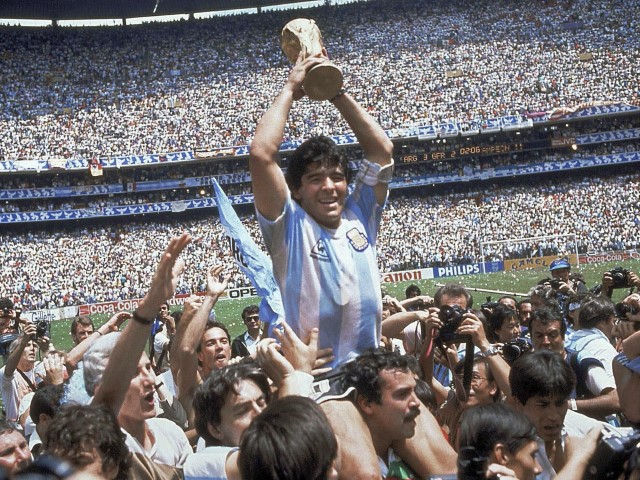 Then, before the video ends, both Chávez and Maradona take flight, presumably toward Heaven.

The video attracted jeers and derision from Venezuelans and soccer fans when surfacing on Twitter.

“The exercise of public function in Venezuela is a constant show to say the least,” said Twitter user Dennys Reyes on Saturday.

“Apart from the sadness, I only think, ‘how much did these antics cost?’” questioned Twitter user Leonardo Galindez.

“Tell me really if you have seen a more ridiculous thing than this one,” Twitter user Miguel Angel Roman said on Saturday.

María Gabriela Chávez, Hugo Chávez’s oldest daughter, blasted the video by condemning its “lack of respect for the memory” of the late socialist dictator.

“Simple: the best way to honor Commander Chávez is by following his example of life, humility and dedication. Never by making a grotesque video of some dumb superheroes,” the younger Chávez said in a statement on Twitter. “It is a lack of respect for the memory of my father! Chávez lives in the soul of his people!”

After Chávez died in March 2013, the socialist regime posthumously elevated him to the position of “Supreme and Eternal Commander of the Revolution.” Venezuela’s ruling United Socialist Party would then elevate Chávez’s figure to near Messianic status, going as far as to releasing cartoons depicting the “arrival” of Chávez to Heaven alongside other notable figures of Venezuelan history, doctoring pictures of Chávez in official mandatory broadcasts to give the impression that the socialist dictator had ascended to the heavens, and rewriting the Lord’s Prayer in 2014, replacing the Christian God with Hugo Chávez.