Lula made the remarks in a press conference in Buenos Aires alongside Argentine President Alberto Fernández. Fernández, a fellow hardline socialist who has paid an honorary visit to the corpse of mass murderer Mao Zedong, is currently hosting the summit of the Community of Latin American and Caribbean States (CELAC), a regional coalition. Lula’s predecessor Jair Bolsonaro had abandoned the bloc in 2020 on the grounds that it was too sympathetic to communist dictatorships and tolerant of human rights abuses.

Lula won a third term as president last year despite being convicted on multiple appeals of taking bribes the last time he was in office; his visit to Argentina is his first trip abroad since his inauguration on January 1.

Lula’s attendance at the CELAC is a signal of Brazil’s return to the far-left coalition it led in the region during Lula’s first two terms a decade ago. He is expected to meet with Cuba’s figurehead president Miguel Díaz-Canel on Tuesday and had scheduled a meeting with socialist Venezuelan dictator Nicolás Maduro, but the latter abruptly canceled his visit to Buenos Aires, citing unspecified scheming by the “neo-fascist right.”

Maduro’s country – one of the world’s most impoverished after over two decades of socialist dictatorship – and his patron state of Cuba were the topic of detailed remarks from Lula during his press conference with Fernández. Lula enthusiastically objected to human rights sanctions on both countries and urged fellow CELAC member states to express “affection” to the repressive regimes. 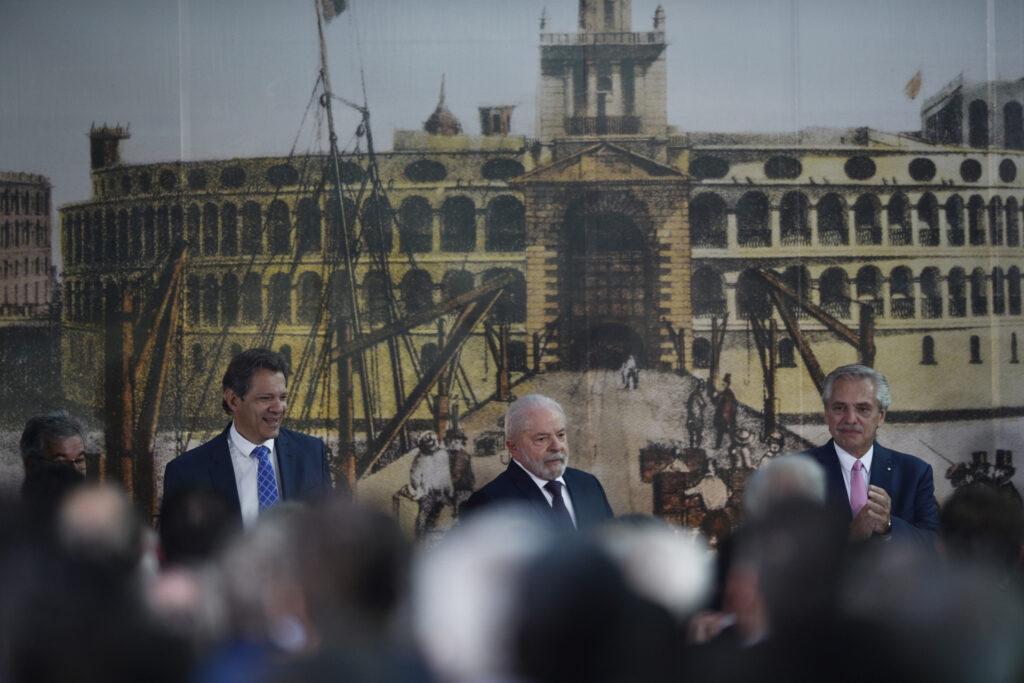 “Venezuela’s problems will be resolved with dialogue and not with a blockade,” Lula reportedly said, according to the far-left outlet Telesur. “Every time a comrade has to be criticized, I prefer to give advice instead of criticism.”

“Brazil, especially Brazil, and the countries that make up CELAC, have to treat Cuba and Venezuela with great affection. Insofar as we can help them solve their problems, we will help,” Lula advised, according to the Brazilian news portal UOL.

Prior to the remarks, Lula’s government welcomed a Maduro regime ambassador to Brasilia after formally recognizing the Maduro regime as the government of Venezuela following his inauguration. In 2019, the Venezuelan National Assembly used its constitutional powers to replace Maduro, appointing lawmaker Juan Guaidó as the nation’s interim president. Guaidó never succeeded in removing Maduro from the presidential palace or obtaining support from the Venezuelan armed forces and the National Assembly removed him as president last month. Bolsonaro, like dozens of leaders in the free world, recognized Guaidó as president of Venezuela while he was legally occupying that position.

In Argentina, Lula also made a particular show of affection to Fernández, embracing him repeatedly during the public portion of their encounter and emphasizing bilateral cooperation. Prior to the meeting, Fernández’s Economic Minister Sergio Massa said in an interview that the two countries were working on a plan to establish a joint currency that could one day serve all of South America, similar to the Euro on the European continent. Lula promised to work to create the “sur” currency while campaigning last year as a way to challenge the global economic dominance of the U.S. dollar.

Absent from Fernández’s meeting with Lula was any mention of his racist remarks towards Brazilians in 2021 in which he referred to them as “jungle” people, outraging then-President Bolsonaro and much of the population of the country regardless of political affiliation.

“Octavio Paz once wrote that Mexicans came from the Indians, Brazilians came out of the jungle, but we the Argentines came from the boats, and they were boats that came from Europe, and that is how we constructed our society,” Fernández said at the time. No evidence exists that Paz, a Nobel Prize-winning author, ever said anything resembling Fernández’s offensive remarks towards Brazilians.

Lula’s warm words towards the Venezuelan and Cuban dictatorships outraged many Brazilians, including many who do not support Bolsonaro or identify as conservative.

“It is one thing to respect the sovereignty of others and the self-determination of peoples. It is quite another thing to offer ‘affection’ to dictatorships,” UOL columnist Josias de Souza wrote on Tuesday. “It is one thing to cultivate diplomatic relations above ideologies. It is another thing to ignore the fact that democratic countries should not coddle regimes that despise the most elementary values ​​of democracy and human rights.”

Lula will meet Castro regime underling Miguel Díaz-Canel on Tuesday, according to his official schedule. Despite rearranging his schedule to accomodate the Venezuelan dictator, Lula will not be able to meet with Maduro this week as the latter canceled his visit to Argentina.

“In the last few hours we have been informed in an indisputable way of a plan elaborated in the bosom of the neo-fascist right, whose objective is to bring about a series of aggressions against our delegation [to Argentina] headed by the president,” an official statement from Maduro’s office dramatically proclaimed on Monday evening. The statement concluded accusing the Argentine right of organizing a “deplorable show” to embarrass the summit and Maduro in particular, making it impossible for Maduro to visit.

The “deplorable show” the Venezuelan narco-regime objected to appears to be merely public grievances by Argentine right-wing leaders disgusted by the fact that Fernández would welcome murderous dictators to their country.

“Nicolás Maduro and Miguel Díaz-Canel are dictators, drug traffickers, and terrorists,” populist right presidential candidate Javier Milei denounced on Monday. “In their countries, human rights do not exist, poverty levels are at 90 percent, dissidents are abducted, tortured, and killed. Receiving them in Argentina is an international embarrassment.”