Two of the most powerful Democrats in Congress blasted Breitbart News on Monday as “offensive” over an article published highlighting street art inspired by Andrew Breitbart that included a photoshop of House Minority Leader Nancy Pelosi’s face on the body of Miley Cyrus in her infamous MTV VMA performance.

Pelosi (D-CA) said the artwork was “tasteless,” and Democratic National Committee Chair Debbie Wasserman Schultz (D-FL) declared it was “disrespectful to all women.”

“So tasteless, that… I mean, is it even worthy of a question,” Pelosi said, according to the Washington Post.” It’s so undignified.”

The DNC Chair earlier in the day demanded the Republican National Committee “not continue to use this website as a forum for their views.”

“To say the least, the Breitbart news ad is foul, offensive, and disrespectful to all woman,” Wasserman Schultz said in a statement. “It is a disgusting new low and would be reprehensible against any woman – regardless of party.”

The “new low” actually first occurred in October of 2013 when another media entity made a political statement with a depiction of a female politician connecting her to Miley Cyrus. 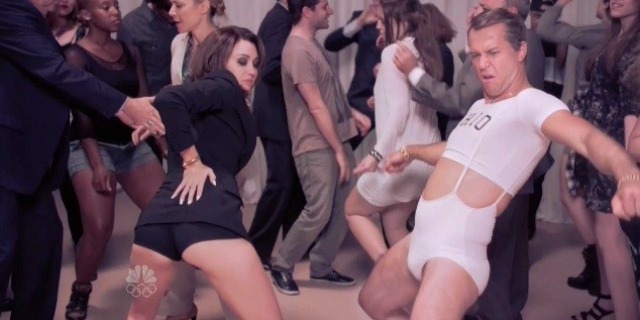 Cyrus herself raunchily depicted Rep. Michele Bachmann (R-MN) in a Saturday Night Live skit touching her crotch while writhing on the ground, shaking her backside in tight shorts, and sticking out her tongue and licking people with a gay, hypersexual John Boehner.

Another NBC show insulted Bachmann when The Roots, the band for Jimmy Fallon’s then-Late Night, played a song called “Lyin’-Ass Bitch” to introduce the Congresswoman’s appearance on the show in 2011. Neither Wasserman Schultz nor Pelosi responded in a public forum.

A good faith Google search failed to find Wasserman Schultz logging any kind of protest after HBO’s Bill Maher referred to former-Alaska governor Sarah Palin as a “dumb twat,” not even when Wasserman Schultz appeared as a guest on Maher’s show after the incident.

A good faith Google search also failed to find an example of either Wasserman Schultz or Pelosi protesting after Mother Jones published a cartoon of Palin that is very similar in style to the Pelosi street art.

Despite this, Mother Jones remains a trusted and invaluable weapon for Democrats against Republicans.

Wasserman Schultz’s full statement is below:

To say the least, the Breitbart News ad is foul, offensive, and disrespectful to all women. It is a disgusting new low and would be reprehensible against any woman – regardless of party. It’s no wonder the Republicans are having problems appealing to women. If GOP leaders are serious about their rebrand, then both their elected and Party leadership should condemn this outrageous behavior, call on Breitbart News to immediately remove the ad, and not continue to use this website as a forum for their views.