According to the San Diego Union Tribune:

The tense exchange happened as fewer than a dozen activists gathered for an event they called the Patriot Picnic. The group planned to eat lunch at the Barrio Logan park before taking a tour of the murals, said Roger Ogden, one of the organizers. Ogden…said an email campaign has been started to get the artwork removed from the public park…

Word spread about the tour, and a counter-demonstration, dubbed the Solidarity Gathering at Chicano Park, was planned for noon. Hundreds of people attended to show their support.

The Times of San Diego reports that the counter-demonstrators were brought together by “a Facebook event for the gathering … organized in response to reports that a group of people planned to visit the park Sunday as part of a scouting expedition in response to Confederate monuments being removed across the country.”

The “Patriot Picnic” tour was captured on YouTube and shows a group of a half dozen or so gathered around a picnic table that is painted the colors of the Mexican flag on an unoccupied side of the park, sandwiched between a busy road and the freeway.  They were there ostensibly to eat a pizza lunch, but as one of the group was filming some of the murals and doing his own commentary, a phalanx of San Diego Police formed a line along the sidewalk as the crowd of counter-demonstrators became increasingly agitated.

Within minutes, the group was surrounded by hundreds of people, many wearing brown berets and waving Mexican and Communist flags, while filming with phones and trading insults with the pro-Trump demonstrators.

Shortly after forming a human barrier, the police were forced to retreat from their own line as the mob began to surge across the street. About two dozen officers surrounded the pro-Trump activists in order to protect them from the increasingly agitated and angry counter-protesters.

The park, which has been a controversial symbol of Latino activism since it’s inception in the 1970s, was in the news recently for a mural depicting an ICE agent choking a Mexican worker.

Local Affiliate NBC7 reports that counter-demonstrators attacked the motivations of those who attended the “Patriot Picnic” as wanting “to promote hate.”

After about 15 minutes, the pro-Trump activist group was ordered by SDPD to leave the park, and the entire group was escorted through the crowd, taunted by counter-demonstrators shouting “Nazis go home” and “Racists go home.” 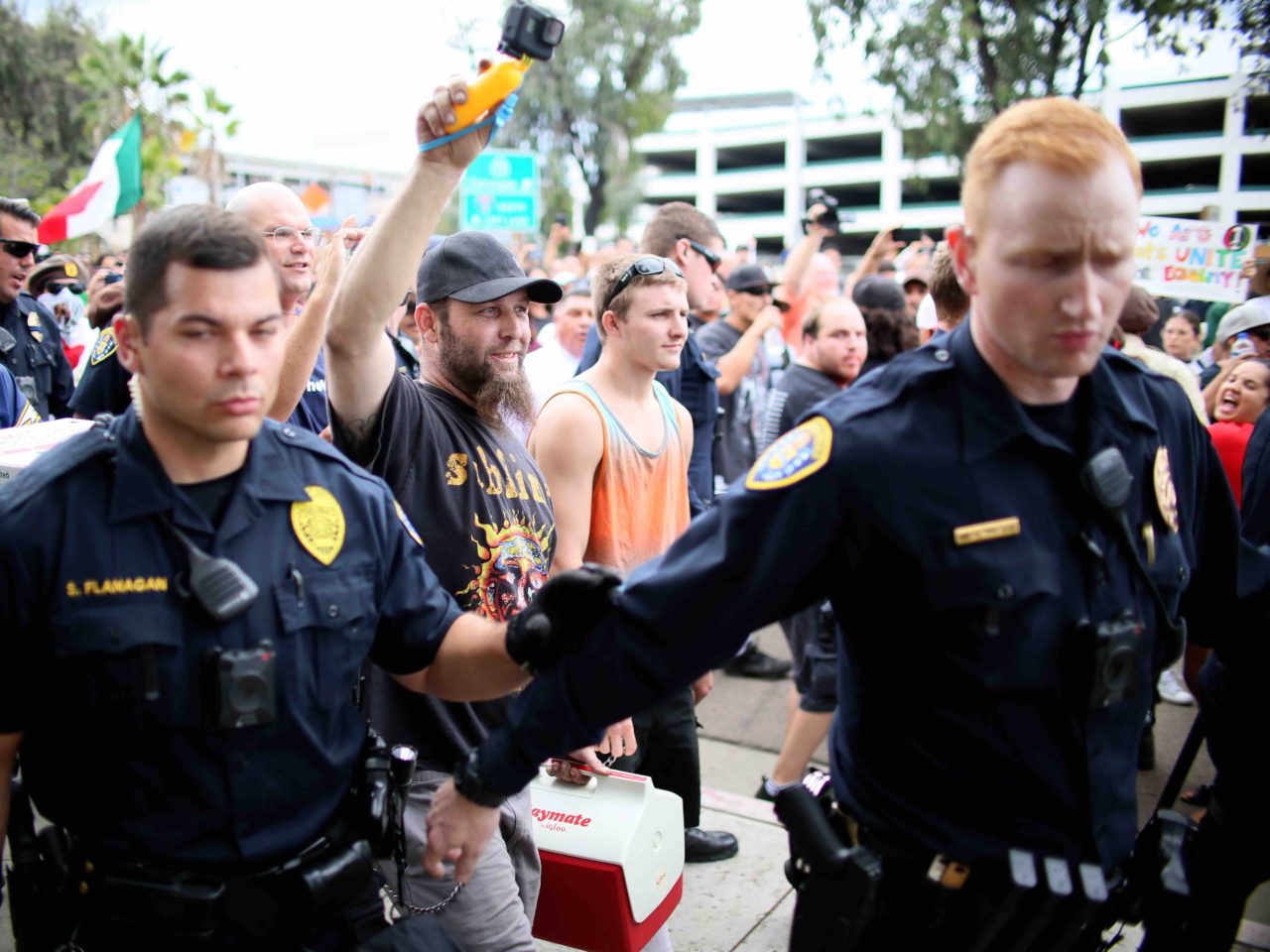 Tim Donnelly is a former California State Assemblyman and Author, currently on a book tour for his new book: Patriot Not Politician: Win or Go Homeless.  He also ran for governor in 2014.

Correction: An earlier version of this article inadvertently included an inaccurate caption from the Getty photo wire service referring to the demonstration as “white supremacist.” The caption has been removed.