Judging by the support for Muslim Brotherhood institutions in Massachusetts offered by politicians, law enforcement, and journalists, it would seem not.

Three years ago, Dzhokhar Tsarnaev lay wounded, hiding from police in the city of Watertown, a leafy suburb of Boston. On April 15, he and his brother, Tamerlan, had bombed the Boston marathon, murdering three and injuring hundreds. Over the next few days, Dzhokhar would kill MIT police officer Sean Collier, take a hostage, wound police officers in a firefight, and run over his dying brother.

By April 19, the injured Dzhokhar awaited his inevitable capture, bleeding in a Watertown backyard. As law enforcement closed in, Dzhokhar scribbled text on the walls of the boat where he hid.

For a terrorist who had just murdered in the name of Islam, some might expect his parting message to be a litany of Quranic verse. But the writings on the wall of the Watertown boat mostly comprised quotes from Islamist political tracts, written by the Islamist luminaries of the 20th century – Muslim Brotherhood and Jamaat-e-Islami ideologues such as Sayid Qutb, Hassan Al Banna, Fathi Yakan, and Abul A’la Maududi. 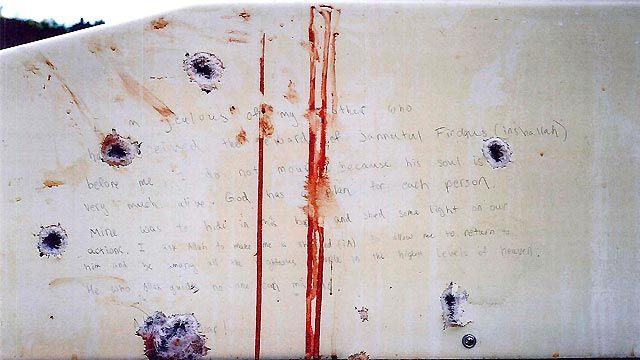 Dzhokhar’s justification for his killings came from the writings of Islamist movements who today control American Islam – Islamist groups who have, on the last few decades, found favor with America’s political and media elite.

Radical mosques such as the Islamic Society of Boston (ISB) remain a magnet for politicians, city officials, and journalists who want to express their love of American Muslims. Most recently, Boston Police Commissioner William Evans spoke at the mosque, declaring: “We’re all Muslims deep down. We all yearn for peace.”

This same mosque was founded by a prominent Al Qaeda operative; its trustees have included the Hitler-supporting spiritual leader of the Muslim Brotherhood; and, just in October, the mosque hosted an event with two preachers who advocate that Muslim men can acquire sex slaves and should be allowed to beat their wives.

Over the past few decades, in fact, twelve congregants, supporters, staff and donors of the ISB have been imprisoned, deported, killed or are on the run – all in relation to terrorist activity. This list includes the Boston bombers, Al Qaeda operatives Tarek Mehanna and Aafia Siddqui; Lashkar-i-Taiba fundraiser Hafiz Masood; and the prominent Islamic State official, Ahmad Abousamra.

Most importantly, the ISB teaches the very texts that Dzhokhar scribbled across the Watertown boat. These teachings are of a Muslim Brotherhood educational program known as “Tarbiya.” The ideological link could not be clearer. Dzhokhar left written confirmation — blood and ink that explained his actions.

The authorities, however, refuse to consider what terrorists themselves proclaim. Because to accept that Islamist ideology lead to Islamist violence would be to acknowledge that the self-proclaimed guardians of American Islam pose a serious threat to the security of the United States. It would be to acknowledge that America has fundamentally misunderstood Islam itself.

Rather than tackle radical Islamism, however, law enforcement and politicians instead attend peace rallies, interfaith dialogue dinners, and other feel-good events with the Islamists themselves, who are adept at expressing peace and love by day and inciting hatred against Jews and the West at night.

In 2015, US Attorney Carmen Ortiz further illustrated this government delusion when, astoundingly, she said of the Boston bombings: “There was nothing about this crime that was Islam associated.”

When pressed on the Tsarnaev’s Islamic invocations, Ortiz went so far as to define herself what makes a real Muslim, stating that the Tsarnaev’s ideology was “a skewed view of the religion of Islam. That is not what Islam is all about.”

Government officials and Islamists currently share something in common: they both believe they have the better right to define “true Islam” than ordinary Muslims themselves.

So three years since the marathon bombings, Massachusetts officials have not just failed to understand the threat; they refuse to accept that ideology plays any part at all.

The distinct refusal to acknowledge the ideological underpinning is rarely found elsewhere. Can you imagine a government official responding to neo-Nazi violence by attending a brunch with the Ku Klux Klan?

Such is the strength of the “Islam is Peace” mantra, that, for politicians and law enforcement, the radicalization process is not hard to understand, but it does seem difficult to accept. Unless law enforcement and government starts to examine and counteract the ideological Islamist network that has imposed its rule over much of American Islam, there will only be more bombings, more shootings, and more stabbings. When will they learn?

Sam Westrop is the Research Director for Americans for Peace and Tolerance.