Israel has been listed in a Canadian school textbook as a country that recruits children as “spies and soldiers”, placing the Jewish State alongside Afghanistan, Colombia, Iraq, Libya, and Yemen as a human rights violator.

About 800 elementary schools in Ontario province have received the Grade 6 Social Studies textbook, Canada and the Global Community, published by Nelson Canada which also charges Israel with “kidnapping” child soldiers and “forcing” them to fight. Nelson, Curriculum Services Canada (Canada’s standards agency for the accreditation of educational resources) and the Ontario Ministry of Education have all approved the textbook. 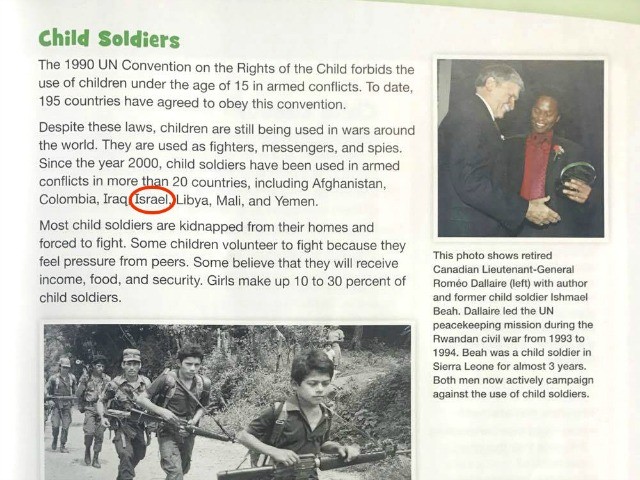 B’nai Brith Canada is calling on the province’s education ministry to address the failures in its vetting process that allowed the allegation to go to print and ensure that these inaccuracies are corrected before the next school year, which starts Sept. 6, 2017.

“By including this textbook on the Ontario Trillium List since 2015, the Ministry of Education has allowed false propaganda to be indoctrinated to the youth of this province for the past three years,” said Michael Mostyn, Chief Executive Officer of B’nai Brith Canada.

“The distribution of this textbook will surely have negative ramifications on Jewish students across the province if their peers were to, using its contents, charge Israel of kidnapping child soldiers.”

“The Ministry has an obligation to not only correct these errors but to teach the reality of the situation – that it is Palestinian leaders who use child soldiers,” said Mostyn. “It is terrorist organizations like Hamas, the political authority in the Gaza Strip, who continue to promote children as terrorists and suicide bombers, while entities like the Palestinian Authority promote jihad and martyrdom in textbooks and other materials. Including these facts will restore balance and accuracy to the coverage of this sensitive issue in our classrooms.”

As Breitbart Jerusalem reported, anti-Semitic incidents across Canada soared to a record high in 2016, driven in part by a rise in Holocaust denial especially in Arabic-language publications.

According to the Toronto Sun,  Ontario Education ministry spokesman Heather Irwin gave assurances they take the “accuracy” of information in school textbooks “very seriously.” She said all affected schools have been notified and replacement stickers “have started to be sent” to cover the error.