JERUSALEM — The Palestinian Authority’s (PA) official TV station this week re-aired a sermon by an imam in an educational position in which he claims that late Prime Minister Ariel Sharon would celebrate his birthday by urging Israelis to murder ten Palestinian children “before the end of the day.”

Imad Hamato was appointed last year by PA President Mahmoud Abbas to be dean of the Al-Azhar Institutes, a system of schools that prepare students for studies at the Al-Azhar University in Gaza, Israeli monitoring group Palestinian Media Watch reported.

During the show, Hamato said: “Read the memoirs of [Israeli Prime Minister Ariel] Sharon who died. When he wanted to celebrate his birthday, he used to say: ‘On my birthday I want 10 candles to be blown out, 10 Palestinian children. I want to hear that at the end of the day, so that I can feel joy.'”

PA TV often educates its viewers that Israelis are out to murder their children. The host of a children’s program called The Best Home warned Palestinian children not to go out without adult supervision because “barbarous, murderous” Israelis were hunting them.

“The occupation [Israel] targets children everywhere. In their schools, near their homes … We must be very careful now. We are confronting the occupiers who act in a very barbaric terrorist way,” the host said:

They are trying to kill people everywhere. These are barbarians, my young friends. They try to kill people for no reason, who are just walking on their land. They make various accusations against them. This is called barbarity, my friends. Be very careful all the time. All children under 18, and children under 15, when you go out, your mom or dad, should accompany you, I mean that an adult should accompany you.

That year, a video of Hamato was broadcast where the imam accused Israel of corrupting the Muslim world through prescription pills and penile enlargement ads.

“We see ads for penis enlargement, and this and that, which are shameful and offensive to one’s modesty,” he said, adding that Israel was poisoning the Arab world with its “sex-craze.” 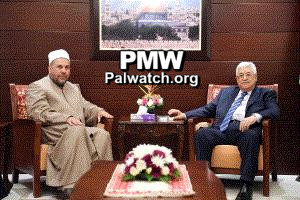