The commander of the Iranian Navy said on Thursday the country is thinking about making nuclear submarines, a prospect first publicly broached back in 2016.

Rear Admiral Hossein Khanzadi said the stance of Iran about nuclear energy “is totally clear” and of a “peaceful nature” however that does not rule out nuclear boats.

According to the official IRNA agency, the commander added Iran needs nuclear energy as “U.S. warships are in the region because they are using nuclear fuel. Without it, they would have to go to ports for refueling and they would be able to stay on the sea for six months.”

Nuclear propulsion has made a heavy vessel with a great deal of equipment stay on the sea for a long time, he observed.

This is the second time in the space of a few years that Iran has spoken of the intention to develop a nuclear navy capability.

Iranian Ghadir-class submarines are unveiled during a ceremony in the southern port city of Bandar Abbas. (VAHID REZA ALAEI/AFP via Getty Images)

As Breitbart News reported, Iran President Hassan Rouhani declared in 2016 that Iranian nuclear scientists had been ordered to draw up plans for a nuclear-powered surface fleet.

Rouhani gave his domestic Atomic Energy Organization in Iran just three months to devise the plans in his public announcement.

He said the nuclear navy initiative was “warranted in light of the United States’ foot-dragging in fulfilling its commitments under the multilateral nuclear deal… and the recent ratification of anti-Iran legislation in the U.S. Congress.”

Rouhani also wrote a letter instructing Foreign Minister Mohammad Javad Zarif to “follow up on the U.S. violations” of the nuclear deal.

Reuters noted that according to nuclear experts, plans for nuclear ships would “probably require Iran to enrich uranium to a fissile purity above the maximum level set in the nuclear deal to allay fears of Tehran building an atomic bomb.” 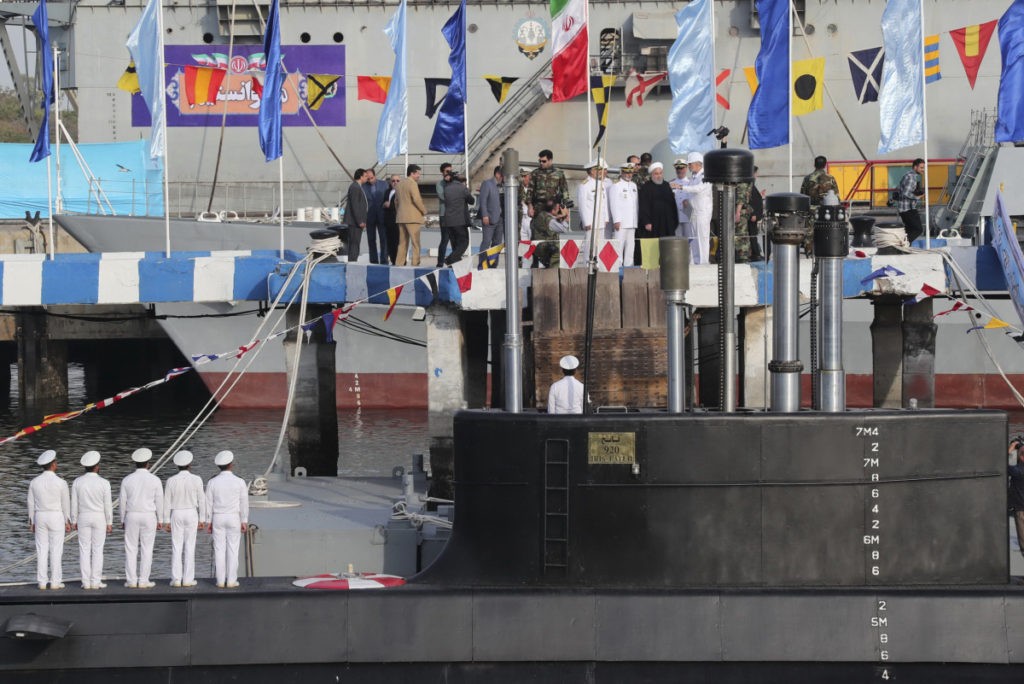 President Hassan Rouhani, center with white turban, and other dignitaries attend the inauguration of Fateh, “Conqueror” in Persian, Iranian made semi-heavy submarine in the southern port of Bandar Abbas, Iran, Sunday, Feb. 17, 2019. The Fateh has subsurface-to-surface missiles with a range of about 2,000 kilometers (1,250 miles), capable of reaching Israel and U.S. military bases in the region. (Iranian Presidency Office via AP)

Iran’s submarine force reportedly consists of around 28 vessels. Iran does not have any SSBNs (Ballistic Missile Submarines), nor SSNs (Nuclear-Powered attack submarines).

It does however have around 6 SSKs (diesel-electric attack submarines) and 22 SSMs (Mini Submarines).

Iran bought three Kilo-Class SSK submarines from Russia (known as Tareq-class in Iran). They are 74 meters long, displace 2325 tons, and can fire torpedoes as well as lay mines.

Their effectiveness is somewhat limited in the Gulf as Kilo-class boats require a depth of at least 164 feet, which is only available in around one third of the shallow Gulf waters.

These submarines are mostly deployed in the deeper Gulf of Oman, and possibly even into the northern Arabian Sea.