Iran’s Supreme Leader Ayatollah Ali Khamenei commanded Muslims on Friday to continue waging all out war against Israel, repeating his suggestion the Israeli government is a “tumor” that should be excised as an “Islamic duty.”

Hatred to the existence of Israel underpins daily religious life in Shi’ite-led Iran, which backs Islamic terrorist militant groups such as Hezbollah to ceaselessly attack the Jewish state.

“The uprising by Palestinians should continue … fight to liberate Palestine is an obligation and an Islamic jihad … The Zionist regime (Israel) is a cancerous tumor in the region.” Iran’s top religious authority Khamenei said in an online speech.

“Today, the world is counting one by one every victim of the coronavirus across the globe, but nobody has asked who is responsible for the hundreds of thousands of martyrdoms, imprisonments and disappearances in Palestine and in countries where the U.S. and Europe have waged wars?,” he said.

“The long-lasting virus of Zionists will be eliminated.”

He said Israel – which Tehran refuses to recognize – was created by the West in a conspiracy between Jewish plutocrats and banking interests.

“Westerners & Jewish corporation owners’ main goal by fabricating the Zionist regime & this cancerous tumor was to build a stronghold to influence & dominate West Asia. So, they equipped the bogus, occupying regime with all kinds of military & non-military tools, even nukes.”

Westerners & Jewish corporation owners’ main goal by fabricating the Zionist regime & this cancerous tumor was to build a stronghold to influence & dominate West Asia. So, they equipped the bogus, occupying regime with all kinds of military & non-military tools, even nukes.

He claimed the Iran-led “resistance” had created many problems for Israel and, “God willing, the Zionist regime will encounter even more problems in the future.”

Khamenei said it was an “Islamic duty” to fight for the “liberation of Palestine.”

His comments came days after he shared an anti-Israel poster that used the term “final solution” to call for the end of Israel — a term harking back to Nazi Germany’s efforts to eliminate all Jews. 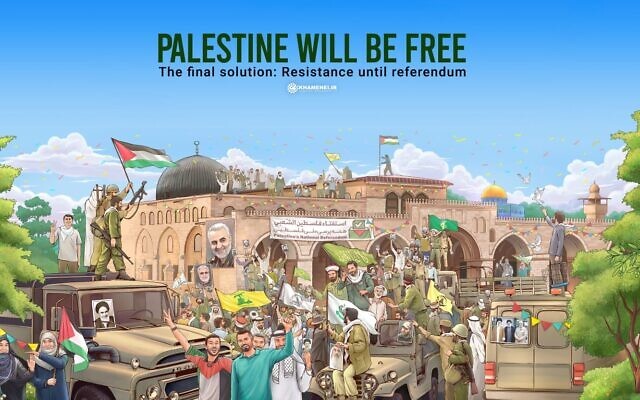 Khamenei’s latest speech denouncing Israel came on Quds Day, which uses the Arabic name for Jerusalem, held on the last Friday of the Muslim fasting month of Ramadan. The annual event was inaugurated by Ayatollah Ruhollah Khomeini, late founder of Iran’s 1979 Islamic Revolution.

However, Iran’s clerical rulers had to cancel Friday’s nationwide street rallies marking the occasion due to the coronavirus outbreak.

Instead protesters drove in packed motor vehicles while shouting “Death to Israel! Death to America!” through the windows at startled pedestrians. Surgical masks had to be worn at all times in the anti-Israel convoys with women separated from men in cars of their own.

Crying “Death to America” or “Death to Israel” at the top of one’s voice is a popular pastime in Iran, sometimes used as a greeting between friends and family, at other times as a bookend to large public gatherings.