“The Mideast peace train has left the station. It is being driven by U.S. President Donald Trump, Israel Prime Minister Benjamin Netanyahu and the leaders of the United Arab Emirates and Bahrain,” said Aaron Klein, strategic adviser to Netanyahu, on Thursday.

Klein made his confident prediction ahead of the signing of historic diplomatic accords between Israel and two Gulf Arab nations that herald a dramatic shift in Middle East power dynamics and leave Iran more isolated than ever.

In a White House ceremony underlining presidential statesmanship, Trump hosted more than 700 guests on the South Lawn to witness the sealing of the agreements between Israel, the United Arab Emirates and Bahrain. 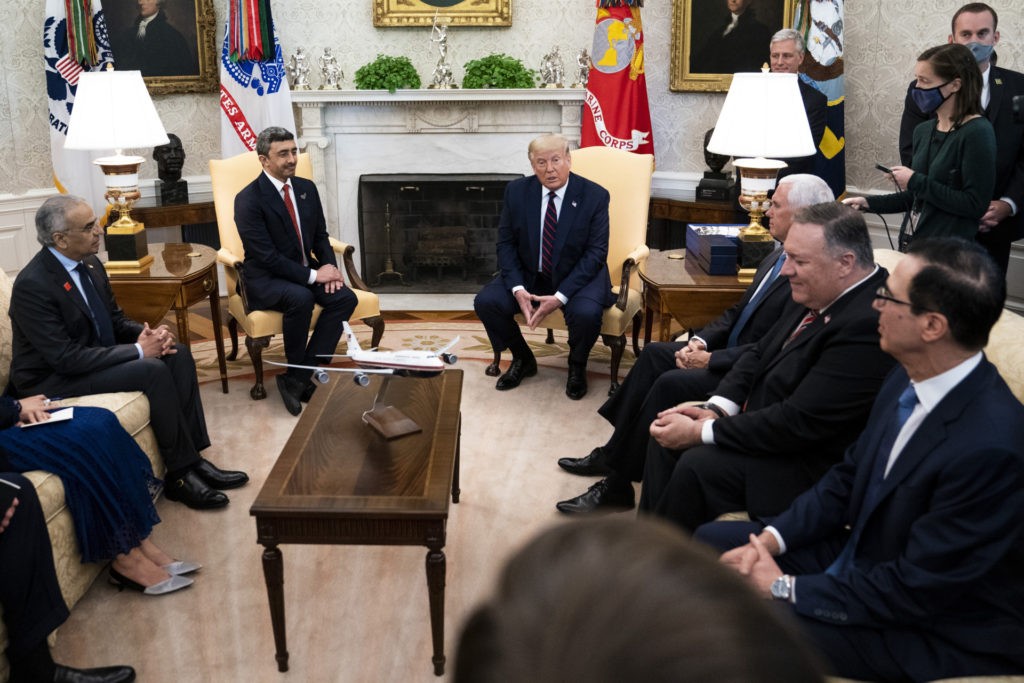 U.S. President Donald Trump and Foreign Affairs Minister of the United Arab Emirates Abdullah bin Zayed bin Sultan Al Nahyan participate in a meeting in the Oval Office of the White House on September 15, 2020 in Washington, DC. The foreign affairs minister is in Washington to participate in the signing ceremony of the Abraham Accords. (Doug Mills/Pool/Getty Images)

Klein, who until taking up his position with Netanyahu served as Breitbart’s Jerusalem bureau chief and senior investigative reporter, told Breitbart News there is no doubt the day will “usher in a new era of regional harmony and cooperation.” He said:

The train tracks were laid by Prime Minister Netanyahu over the last decade and a half as the Gulf nations watched the Israeli leader spearhead an unrelenting and successful global campaign to stop Iran from obtaining nuclear weapons. Netanyahu did this at times singlehandedly even as other politicians in Israel and around the world supported the dangerous international nuclear accord. Netanyahu was joined by President Trump, who kept his campaign promise to extract the U.S. from the disastrous Iran deal.

And the peace train was recently fueled by President Trump’s revolutionary Peace to Prosperity plan, the most realistic formula for Mideast peace. On day one, Israel accepted the plan as a basis for talks while the Palestinians unfortunately rejected the Trump formula, missing a unique opportunity to bring real peace and obtain much needed jobs for the Palestinian economy.

President Trump’s decisions to move the U.S. embassy to Jerusalem, recognize Jerusalem as Israel’s capital and affirm Israeli sovereignty over the Golan Heights each contributed enormously to the momentum for today’s peace accords.

Klein added Tuesday’s peace deals are the culmination of the Netanyahu Doctrine — “peace in exchange for peace and peace from a position of strength.”

Under Netanyahu’s leadership, Israel has become a powerhouse that Arab nations want to make peace with for their own interests. After years of Palestinian rejectionism, it no longer makes sense for Gulf nations to give the Palestinian leadership a veto on Mideast peace, Klein observed.

The Netanyahu adviser then reinforced the fact it was Netanyahu’s global leadership to isolate Iran that first “brought about this sea change in the Gulf States’ attitudes toward Israel.” He continued:

After years of heroic work against the terror-supporting leadership in Iran, the Gulf Nations watched as Netanyahu stood alone before a joint session of Congress to warn against the emerging international nuclear deal with Iran. In 2018, Netanyahu ordered the daring Israeli raid on a secret Iranian facility, exposing previously unknown sites utilized to assemble an illegal nuclear program. If it weren’t for Netanyahu, Iran most likely would have had nuclear weapons many years ago.

As the peace train moves forward between Israel and the other children of Abraham, there is great hope that more nations will join the expanding circle of peace, was Klein’s parting observation.