A senior adviser to Iran’s supreme leader on Sunday vowed Iran would retaliate over the assassination Iran’s nuclear weapons mastermind Mohsen Fakhrizadeh, which the country has alleged Israel was behind.

“Undoubtedly, Iran will give a calculated and decisive answer to the criminals who took Martyr Mohsen Fakhrizadeh from the Iranian nation,” said Kamal Kharrazi, head of Iran’s Strategic Council on Foreign Relations, according to the Reuters news agency.

Iran on Sunday claimed that Fakhrizadeh assassination bears similarities to the Natanz attack earlier this year, and alleged that Israel was behind both.

“In the Natanz incident, it can be said that their elements are the same as the recent incident, and it seems that the Zionist regime is involved in these cases,” Atomic Energy Organization of Iran spokesman Behrouz Kamalvandi said Sunday, according to The Tehran Times, referring to a June bombing at the the central Iranian uranium enrichment plant. 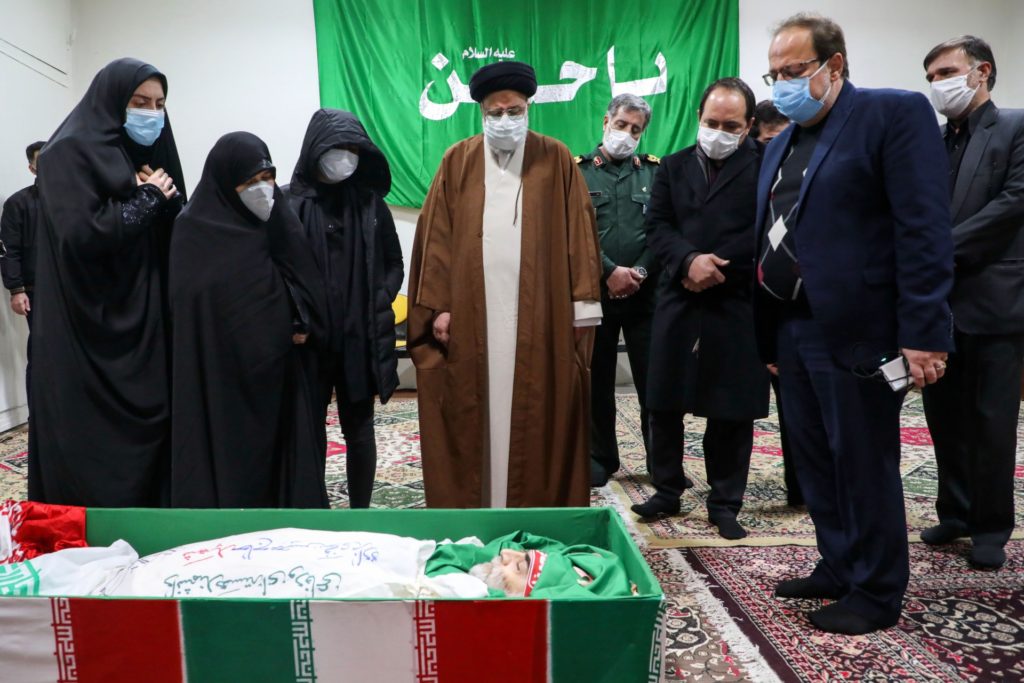 Iran’s Judiciary Chief Ayatollah Ebrahim Raisi (C) pays respects to the body of slain scientist Mohsen Fakhrizadeh among his family, in the capital Tehran on November 28, 2020. Mohsen Fakhrizadeh, dubbed by Israel as the “father” of Iran’s nuclear programme, died on November 27 after being seriously wounded when assailants targeted his car and engaged in a gunfight with his bodyguards outside Tehran, according to Iran’s defence ministry. (MIZAN NEWS AGENCY/AFP via Getty Images)

In a separate article published Sunday by the hardline Kayhan newspaper, Iranian analyst Sadollah Zarei called for Iran to attack the northern Israeli port city of Haifa to retaliate for the killing, saying that such an assault should also incur “heavy human casualties.”

Targeting Haifa and killing a large number of Israelis “will definitely lead to deterrence, because the United States and the Israeli regime and its agents are by no means ready to take part in a war and a military confrontation,” Zarei wrote according to AP.

He added that any strike undertaken should be bigger than Iran’s ballistic missile attack against American troops in Iraq in retaliation for the US drone strike that killed Gen. Qassem Soleimani, head of Iran’s elite Quds Force, in January.

The Iranian-backed terror group Hezbollah has often warned that it would strike Haifa, most recently when leader of the Iranian terror proxy, Hassan Nasrallah,  threatened to annihilate Israel with what he described as a “nuclear” explosion at the Haifa port using the same chemicals found at the deadly Beirut blast August which killed 193 and destroyed large swaths of the city.

On Sunday, the New York Times cited a senior Israeli official, who was involved in tracking Fakhrizadeh for years for Israel, as saying that Israel would continue to take any measure to stop Iran’s nuclear ambitions.

Fakhrizadeh was assassinated near the capital city of Tehran after a bombing and shooting attack between unidentified assailants and his security team.

According to an unnamed Western intelligence source who spoke to Israel’s Channel 12, Fakhrizadeh’s killing was the “pinnacle” of Israel’s long-term plans to curtail Iran’s nuclear weapons program.

Fakhrizadeh was described as the “father of the Iranian bomb” in a famous 2018 presentation by Israeli Prime Minister Benjamin about a raid on a Tehran warehouse in which Mossad operatives spirited half a ton of secret documents on Iran’s nuclear program out the country. During that presentation, Netanyahu said: “Remember that name, Fakhrizadeh.”

“The assassination in Iran, whoever did it, it serves not only Israel, but the whole region and the world,” Steinitz said.

Amos Yadlin, the former head of Israeli military intelligence and the current head of the Institute for National Security Studies think tank, speculated that Secretary of State Mike Pompeo’s recent visit to Israel may have been connected to the killing.

“Whoever made this [assassination] decision knows that there are 55 more days in which the White House has someone who sees the Iranian threat the way they do… Biden is a different story,” Yadlin said.