U.S. Secretary of State Mike Pompeo on Thursday visited an Israeli winery in the West Bank, becoming the first secretary of state to ever visit a Jewish settlement in a move that drew Palestinian protesters to demonstrate and throw stones at soldiers outside the winery.

The visit was followed by an announcement by Pompeo the U.S. will permit imports from Israeli settlements to be labelled “Made in Israel” or “Product of Israel.”

Both moves mark a dramatic departure from U.S. policy, which until the Trump administration designated the West Bank and the Golan Heights as “occupied territories.” In January, Pompeo denounced a longstanding State Department legal opinion declaring Jewish settlements in the West Bank to be a violation of international law as “deeply flawed.”

Months earlier, he issued a more tempered declaration, stating the U.S. “no longer recognizes Israeli settlements as per se inconsistent with international law.”

Enjoyed lunch at the scenic Psagot Winery today. Unfortunately, Psagot and other businesses have been targeted by pernicious EU labeling efforts that facilitate the boycott of Israeli companies. The U.S. stands with Israel and will not tolerate any form of delegitimization. pic.twitter.com/N4oCD5IqRB

The Psagot winery visit came enroute to the Golan Heights, in another first for a U.S. Secretary of State. Last year, President Donald Trump recognized Israeli sovereignty in the Golan.

After the visit, Pompeo said the U.S. will label exports from Jewish settlements as Israeli. 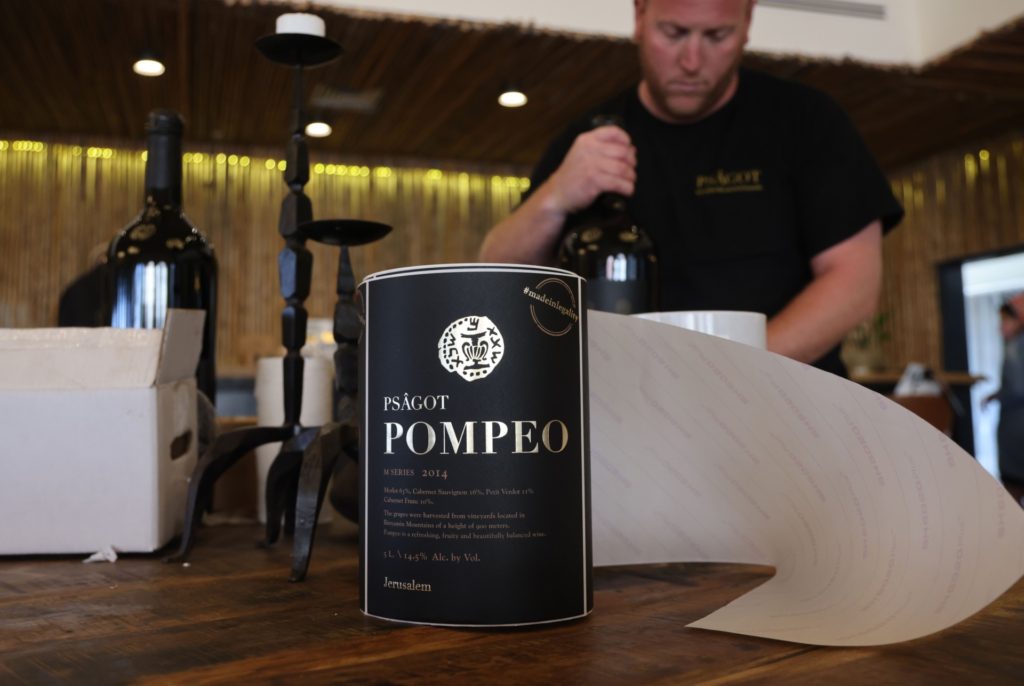 Wine labels named after U.S. Secretary of State Mike Pompeo await to be put on a bottle at Israeli winemaker Yaakov Berg’s Psagot Winery, in the settlers industrial park of Sha’ar Binyamin near the Israeli Psagot settlement in the occupied West Bank north of Jerusalem on November 18, 2020. Berg’s decision to name his red blend after U.S. Secretary Mike Pompeo may capture attention, but for him the hashtag on the label’s top right corner “#madeinlegality” is just as important, categorically rejecting the notion that he makes his wine on a land where Israelis don’t belong. (EMMANUEL DUNAND/AFP via Getty Images)

The announcement came on the heels of another pro-Israel declaration made hours earlier by Pompeo, in which he stated that going forward, the U.S. would deem the Boycott, Divestment and Sanctions campaign against Israel as “anti-Semitic.”

“We will immediately take steps to identify organizations that engage in hateful BDS conduct and withdraw US government support for such groups,” Pompeo said in a joint press briefing with Prime Minister Benjamin Netanyahu.

Netanyahu thanked Pompeo for his “unwavering support” of Israel, throughout his tenure as CIA director and then as secretary of state, and went on to say that under U.S. President Donald Trump the U.S.-Israeli relationship had “reached unprecedented heights.”

Proud to support American policy and stand with our great ally Israel. New guidelines outlined today protect Israeli producers and put the United States, and the world, on track towards recognizing reality. https://t.co/AlMHGPY7WF

Incredible visit today to Qasr al-Yahud, the site where tradition holds that Jesus was baptized. This site has immense importance for many believers, and I was pleased to see the expansion of tourism and access for visitors of all faiths. pic.twitter.com/JWsfYP8wzH

The Psagot settlement is famous for its winery, which made headlines earlier this month after going to court against the European Union’s policy of labeling products made by Israelis in the settlements. One of the winery’s main investors is Jewish-American businessman and owner of Duty Free America, Simon Falic. Falic is also a donor to several politicians in the Republican Party as well as to Prime Minister Benjamin Netanyahu.