ROME — Pope Francis sent a video message to the Iraqi people Friday, declaring that Saturday he undertakes his journey to Iraq as a “pilgrim of peace.”

“In a few days, I will be at last in your midst!” the pope announced. “I have greatly desired to meet you, to see your faces and to visit your country, an ancient and outstanding cradle of civilization.”

“I am coming as a pilgrim, as a penitent pilgrim, to implore from the Lord forgiveness and reconciliation after years of war and terrorism, to beg from God the consolation of hearts and the healing of wounds,” he continued. “I am coming among you also as a pilgrim of peace, to repeat the words: ‘You are all brothers and sisters.’”

In his address, the pope said that he hopes to promote fraternity and solidarity among all Iraqis, whatever their religion.

“Yes, I am coming as a pilgrim of peace, seeking fraternity and prompted by the desire to pray together and to walk together, also with our brothers and sisters of other religious traditions, in the steps of Father Abraham, who joins in one family Muslims, Jews and Christians,” he said.

Francis also reserved words specifically for Iraq’s Christians, a community that has been decimated in recent years and who suffered the brunt of the violence from the Islamic State, which invaded in 2014. 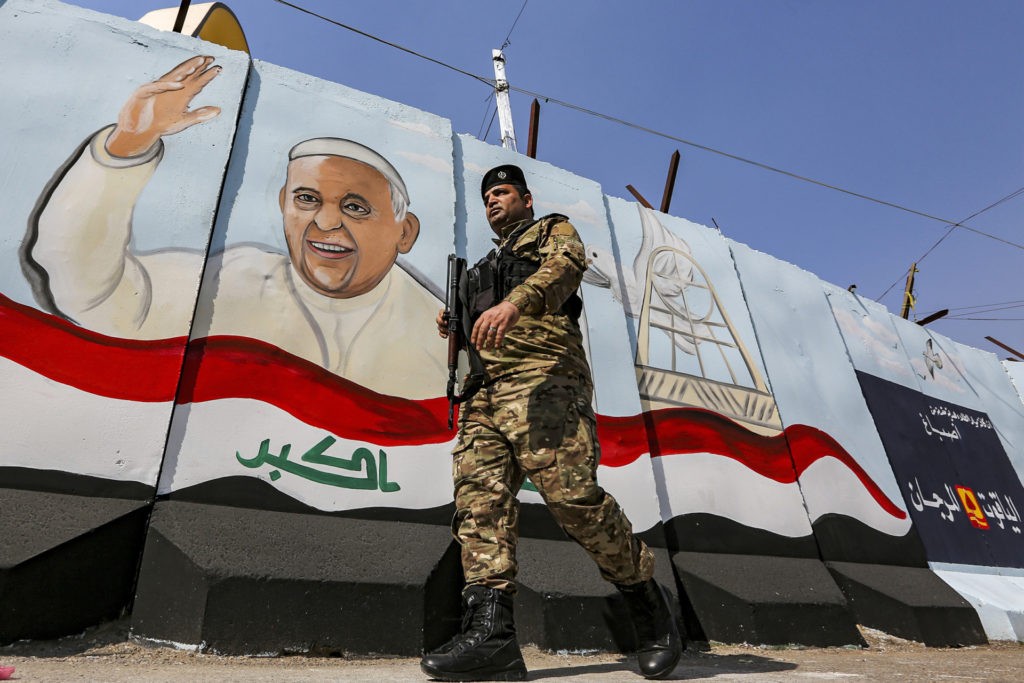 A member of the Iraqi forces walks past a mural depicting Pope Francis waving next to an Iraqi national flag drawn on a blast wall outside the Syriac Catholic Church of Our Lady of Deliverance in the Karrada district of Iraq’s capital Baghdad amidst preparations ahead of the pontiff’s visit. (SABAH ARAR/AFP via Getty Images)

“My dear Christian brothers and sisters, who have testified to your faith in Christ amid harsh sufferings: I cannot wait to see you,” the pope said. “I am honoured to encounter a Church of martyrs: thank you for your witness!”

“May the many, all too many, martyrs that you have known help all of us to persevere with the humble strength born of love,” he said. “You still have before your eyes the picture of homes destroyed and churches profaned, and in your hearts you still bear the hurt of affections left behind and dwellings abandoned.”

The pope said that he brings with him “the affectionate caress of the whole Church,” urging Iraq’s Christians to keep moving forward and not to allow the terrible sufferings they have experienced “to gain the upper hand.”

“Let us not lose heart before the spread of evil,” he said. “The ancient sources of wisdom of your lands point us elsewhere.”

Like Abraham, Iraq’s Christians must never lose hope, he said. “Trusting in God, he became the father of descendants as numerous as the stars of heaven.”

“I have often thought of you over these years, you have who have greatly suffered, yet were never overwhelmed,” the pope continued. “Of you Christians and Muslims, of you peoples, like the Yazidi, who have suffered so greatly; brothers and sisters all.”

“Now I am coming to your land, a land blessed yet wounded, as a pilgrim of hope,” he said. “In your midst, from Nineveh, there resounded the prophecy of Jonah, who halted destruction and brought new hope, God’s hope.”

“May we be infected by this hope, which inspires us to rebuild and begin anew,” he said.