Prince Philip, who passed away at the age of 99 a day after Israel commemorated Holocaust Remembrance Day, was born to Princess Alice of Battenberg, a woman who is remembered for sheltering Jews during the Second World War.

Princess Alice, who was also the great-granddaughter of Queen Victoria, is beloved in Israel for sheltering a Jewish family and was honored by the Yad Vashem Holocaust Memorial as a “Righteous among the Nations,” an accolade for those who saved Jewish people during the Holocaust.

The Greek royal family had been well acquainted with the family of Haimaki Cohen, a Jew and former member of Parliament, from Tricala, in northern Greece. In 1941, when Germany invaded Greece, the family fled to Athens – then still under Italian rule, where the anti-Jewish policy was more moderate. However the period of relative saftely lasted only until September 1943, when following Italy’s surrender to the Allies, the Germans occupied Athens and the hunt for Jews began. By that time Haimaki Cohen had died. His widow, Rachel, and her five children were looking for a place of refuge. The family’s four sons wanted to cross to Egypt, and join with the Greek government in exile that was in Cairo. But the trip proved too hazardous for Rachel and their sister. Princess Alice heard of the family’s desparate situation and offered to shelter Rachel and her daughter, Tilde, at her home. They were later joined by another son who was unable to make the journey to Egypt and had to return to Athens.

In 1994, Princess Alice was honored in a ceremony at Yad Vashem attended by her son, Prince Philip.

Prince Philip said at the ceremony no one in the family was aware his mother had hidden the Cohen family.

The Prince of Wales paid a private visit to the grave of his grandmother, Princess Alice of Battenberg, while in Israel on Friday. pic.twitter.com/QqK0hYXG4X

— The Prince of Wales and The Duchess of Cornwall (@ClarenceHouse) October 3, 2016

“In retrospect, this reticence may seem strange, but I suspect that it never occurred to her that her action was in any way special. She would have considered it to be a perfectly natural human reaction to fellow beings in distress,” Prince Philip said at the time.

“The Holocaust was the most horrific event in all Jewish history, and it will remain in the memory of all future generations. It is, therefore, a very generous gesture that also remembered here are the many millions of non-Jews, like my mother, who shared in your pain and anguish and did what they could in small ways to alleviate the horror,” he added. 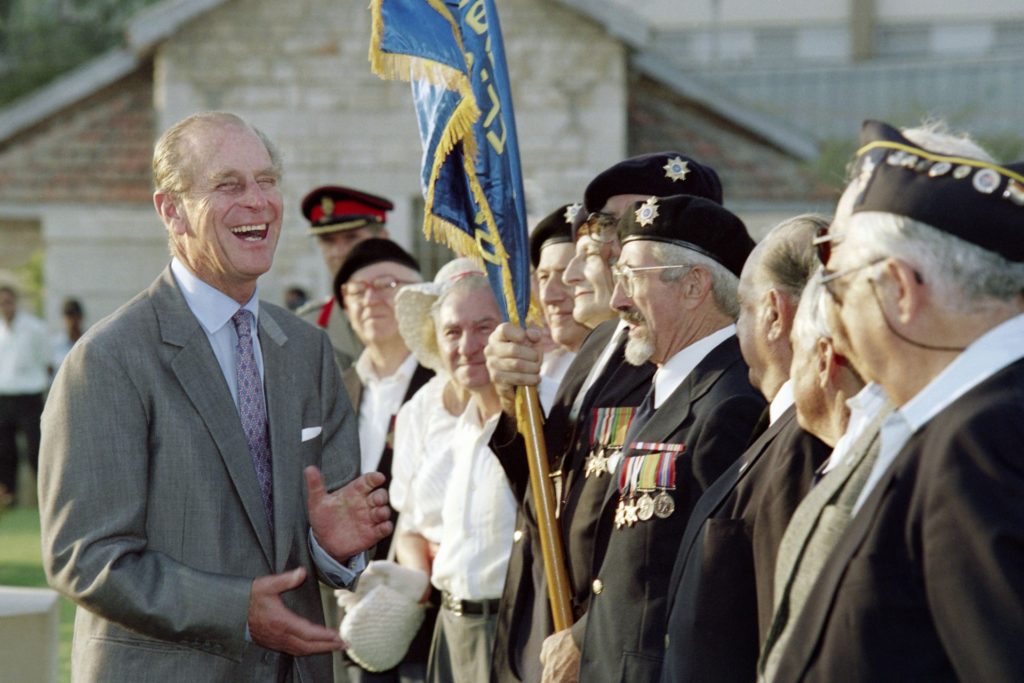 Prince Philip, Duke of Edinburgh, bursts out in laughter during a conversation with WW II veterans after a wreath-laying ceremony at the main Commonwealth War Graves Cemetery in Ramle on October 30, 1994. The Prince is in Israel for a 24-hour visit. (SVEN NACKSTRAND/AFP via Getty Images)