Israel on Monday rejected “serious concerns” expressed by the United States over violent clashes in Jerusalem between police and Palestinian rioters.

“Sullivan highlighted recent engagements by senior US officials with senior Israeli and Palestinian officials and key regional stakeholders to press for steps to ensure calm, deescalate tensions, and denounce violence,” a readout of the call said.

Sullivan also “reiterated the United States’ serious concerns about the potential evictions of Palestinian families from their homes in the Sheikh Jarrah neighborhood,” the statement read.

The two agreed “the launching of rocket attacks and incendiary balloons from Gaza towards Israel is unacceptable and must be condemned,” the statement said.

Rockets were fired at Israel on Sunday from the Hamas-ruled Gaza Strip.

According to the statement, Sullivan also encouraged the Israeli government to “pursue appropriate measures” to preserve calm during Monday’s Jerusalem Day. Jerusalem Day marks the reunification of Jerusalem after Israel liberated the eastern part of the city from Jordanian occupation in the 1967 Six Day War.

On Monday, Ben-Shabbat issued his own statement saying international intervention in the clashes “rewards the rioters” and those who organize them into thinking Israel will be be pushed into compliance, the Israel Ynet news site said.

In an implicit rebuke of Sullivan, Ben-Shabbat said: “Israel manages the events in Jerusalem from a sovereign position, with responsibility and discretion – despite the provocations.”

The clashes in the capital came in response to the planned evictions of Palestinian families from the Sheikh Jarrah neighborhood in eastern Jerusalem as well as a temporary closure of the Damascus Gate in the Old City.

Prime Minister Benjamin Netanyahu told the cabinet on Sunday that Israel “will not allow any extremists to destabilize the calm in Jerusalem. We will enforce law and order decisively and responsibly.”
“We will continue to maintain freedom of worship for all faiths, but we will not allow violent disturbances,” he said. However, addressing the Sheikh Jarrah protests, he added, “We emphatically reject the pressures not to build in Jerusalem.” 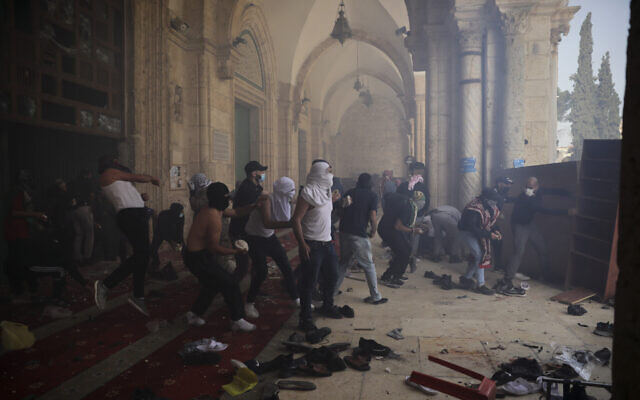 According to Itamar Marcus, the director of monitoring group Palestinian Media Watch, the crisis in Jerusalem was “artificially created” ahead of planned Palestinian elections later this month.

As part of his bid to keep office, Palestinian Authority President Mahmoud Abbas is hoping to gain popularity by inciting Palestinians to violence against Israelis.

“Abbas was at his lowest popularity ever with no legitimacy to continue ruling. He was desperate to redirect Palestinian wrath from him to Israel,” Marcus told Breitbart Jerusalem.

“Palestinians are going out to fight, attack Israelis, and possibly die in the name of protecting the Al-Aqsa Mosque and Jerusalem, but the only cause they are dying for is protecting Mahmoud Abbas from what would have been his political demise,” he added.