The U.N. ambassadors of the U.S., Israel, the United Arab Emirates, Bahrain and Morocco gathered in New York on Monday at an event marking the one-year anniversary of the signing of the Trump-led Abraham Accords.

Israel signed the Abraham Accords with the UAE and Bahrain at the White House on September 15, 2020. Morocco joined the accords in December. Notably absent from Monday’s event was the Sudanese representative. The normalization deal with Sudan faced heavy opposition within the country.

Speaking at the event which took place at Israel’s U.N. mission at Manhattan’s Museum of Jewish Heritage, U.S. Ambassador to the U.N. Linda Thomas-Greenfield praised the Abraham Accords signatories for transforming “ink on a page to concrete improvements between countries.”

She noted a range of recent accomplishments that the accords afforded, including the opening of embassies, the establishment of direct flights between the countries and the observation of Holocaust Remembrance Day.

The Times of Israel reported Thomas-Greenfield purposely abstained from using the term “Abraham Accords,” in a bid to distance the current administration from Trump’s, which coined the term.

…as we continue to pursue normalization between Israel and neighboring countries, we remain committed to a two-state solution. We firmly believe Israelis and Palestinians deserve equal measures of freedom, dignity, security, and prosperity, and U.S. diplomacy will remain focused on practical steps to advance that vision in the immediate term.

It is our hope that these agreements, which are important in and of themselves, also generate momentum between Israel and the Palestinians.

Gilad Erdan, Israeli Ambassador to the U.N., said: “A year ago, a region yearning for change, a region tired of war and conflict, and with endless untapped potential, was presented with an opportunity to change the course of its history.”

“Today we celebrate the landmark agreements and the critical role the United States played and continues to play in making them a success, for which we thank them very much. The fact that the Accords have received such strong bipartisan support is a testament to their great importance,” he added. 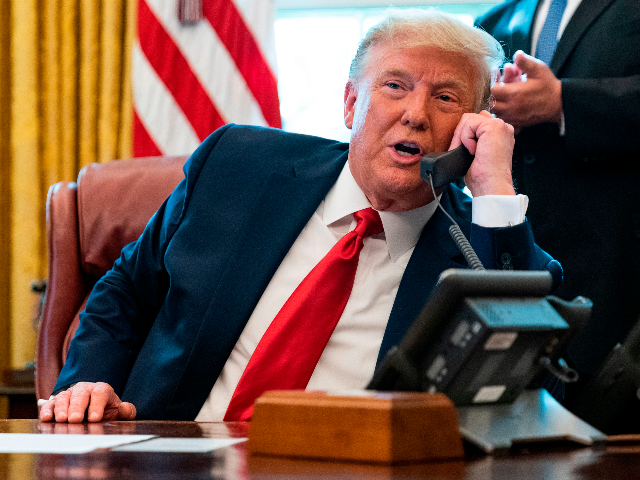 U.S. President Donald Trump speaks to the leaders of Sudan and Israel as he announces Sudan will normalize relations with Israel through the Abraham Accords. (ALEX EDELMAN/AFP via Getty)

“The moderate countries in the Middle East,” Erdan said, “must unite to tackle our shared challenges such as climate change, and form a regional alliance to control our shared threats — first and foremost, Iran. Such an alliance could share intelligence about different threats, and even collaborate on defensive capabilities. Can you imagine Israeli air defense systems like Iron Dome protecting the airspace of our new partners in the Gulf — maybe one day, even Saudi Arabia.”

Erdan also noted the Palestinians would do well to follow in the footsteps of those Arab nations, quipping,  “perhaps even the Palestinians, as they see the benefits of our peace and the prosperity it brings, will finally view these Accords as an opportunity and not a threat.”

He also told the Times of Israel later that “the current Israeli government thinks differently [regarding the two-state solution] and believes that it’s not currently achievable,” and that “even the Biden administration, when they speak with us, they recognize that it’s not something that currently can be achieved.”

“Our relationship [with Israel] draws its strength from the longstanding protection of Morocco’s Jewish community,” said Hilale.

“The flourishing of the Jewish community in the UAE — the first newly established Jewish community in an Arab country in centuries — is just one proof of how the three Abrahamic religions can live together and work side beside in our region in peace,” said Nusseibah.