The House GOP leadership will push a new amnesty bill today that does not set upper limits on an amnesty or even cut migration levels but which does exclude reforms found in Rep. Bob Goodlatte’s immigration reform bill, sources tell Breitbart News.

In November, if House Speaker Paul Ryan gets his way, most GOP legislators “will be on record in support of amnesty,” Iowa Rep. Steve King told Breitbart News. “It is not going to help us in November” if there is a vote in the House on amnesty, King said.

The amnesty would also stop or stall the wage raises which are boosting President Donald Trump’s political ratings and the GOP’s generic-ballot score, especially because many amnesty-seeking migrants will rush across the border in the weeks before the election, in full view of the media’s TV cameras.

GOP donors go on strike: They are demanding that Speaker Ryan deliver 700,000 more foreign workers by June 25 to reduce Americans' wages. What if he rejects their demand? Then voters' wages (& GOP ratings) will continue to rise before the November election https://t.co/CuQ45yKH0t

So far, Ryan has not tried to stop the discharge-petition amnesty by a minority group of 25 legislators. He has the power to cut business-donations to the legislators who are pushing the amnesty and to declare that the House will be out of session on the two possible discharge-petition debate days, June 25 and July 23.

The draft bill will be presented to the caucus on Thursday morning as an amended version of the reform bill drafted by Rep. Bob Goodlatte.

The leaders have already decided to strip out Goodlatte’s offer of extra guest-workers for the farming sector, and his requirement that companies use the federal E-Verify system to exclude illegal migrants from jobs. The Goodlatte bill only offered work-permits to the 700,000 validated DACA migrants, but the leaders want at least 1.4 million Democratic-leaning migrants to get on a “path to citizenship” and to the ballot box.

GOP legislators likely will not see the critical details during the Thursday meeting, said one source. “I doubt seriously they will put it on paper — they will give a 50,000-foot view with as few details as they can, then rush to the floor under the Goodlatte name,” the source said.

“There will be an effort to get them stampeded,” said King, who called Breitbart News from a meeting room on Capitol Hill. Some GOP legislators are ready to be stampeded, he said, adding:

They just want to get [the DACA fight] off the table, they are caught in the [political] current and have suspended their judgment … A lot of them are walking around [and ignoring] me because they have already capitulated in their minds.

In February 2014, GOP legislators sat through a similar amnesty meeting in Cambridge, Md., called by House Speaker John Boehner and Majority Leader Rep. Eric Cantor. The GOP legislators rejected the media-magnified call for an amnesty and kept their majorities in the 2014 and 2016 elections. 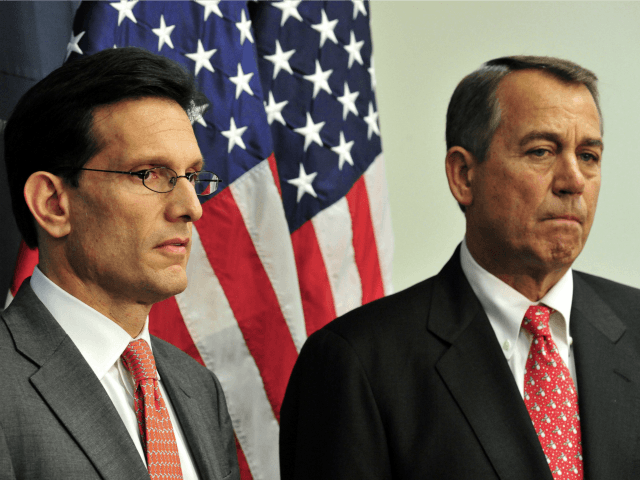 Many business-funded polls show that Americans want to like legal immigrants. But the polls also show that Americans in the voting booth overwhelmingly and strongly oppose any immigration policies which allow companies to import more migrants for jobs sought by Americans. In 2016, Trump used that public/private distinction — and his promise to fight the establishment — to win a record share of the blue-collar vote.

Trump’s promise to fight for Americans also boosted turnout in 2016 House elections and allowed the GOP to keep their majority despite myriad predictions of defeat by polls and pundits.

The morning meeting is being presented as an opportunity for debate, said King, but “they will try to sell us something, not allow open dialogue.”

The leadership amnesty will be presented as a concession to 1.4 million or 1.8 million ‘DACA’ illegals, but the bill will not include any rules that would prevent the amnesty growing far beyond the claimed cap, sources say.

The amnesty provides no means for government officials to quickly reject courtroom demands by migrants who will arrive in 2019 with faked documents showing their eligibility for the DACA amnesty. In contrast, Goodlatte’s bill simply converts a known number of DACA approvals into longer-term work permits, so giving the DACA migrants most of the rights held by Americans except for the vote.

One opponent said the draft bill would create:

an unlimited amnesty that will end up being way more than 1.4 milion becase they don’t know the number [of eligible illegals] and because amnesties are always bigger [than advertised]. There will be no E-Verify so we will be in the exact same position five years from now …  We’re not preventing the next wave of illegal immigrants — we’re creating an incentive for everyone in the world to come here illegally and we’ll be back here [arguing about amnesty] in five years.

The amnesty offer will also paralyze the popular enforcement of immigration law even before November, a source said:

Enforcement essentially will shut down because any illegal alien under 40 can say ‘No, you can’t deport me because I’m eligible for amnesty.’ Every illegal who claims to be eligible — even if they are in jail — will be allowed to stay, and the government will have to prove [in court] they are not eligible.

The draft bill also promises to reduce chain migration by halving the number of chain-migration visas for legal immigrants’ adult children and elderly parents. But the visas cut from chain migration would be “banked” and transferred to employers as “merit-based immigration.”

The transfer will allow companies to bring in even more white-collar graduates for good jobs sought by the hopeful sons and daughters of middle-class voters. The extra inflow of foreign college-grads would reduce salaries for American college-graduates, and also push more American graduates to align themselves with Democratic political causes.

“There would be no reduction in legal immigration for at least 10 years,” giving Democrats plenty of time to reverse the promised cuts in chain migration, said one source.

The sources contacted by Breitbart News disagreed over whether the leadership plan will end the diversity visa-lottery, or if it will provide significant funding for the border wall, or if it will include any reforms of the border-law loopholes that have been used by at least 400,000 Central American migrants to get work permits.

All three of those goals are sought by President Trump.

Democrats want to keep the visa lottery because it imports Democratic-leaning voters and also because “diversity” reduces the political clout of American communities. Democrats also oppose reforms to asylum law because the loopholes provide urban Democrats with a growing demographic of future Democratic voters and a large supply of cheap labor for the companies which serve urban professionals. Democrats also oppose the border wall as a symbolic demonstration of American independence and because it will reduce the northward flow of cheap-labor migrants.

If those measures are excluded, then the bill would show GOP leaders — and perhaps President Trump — surrendering to Democratic pressure and cheap-labor business donors, and also betraying the GOP’s blue-collar base, just before the 2018 election.

If those three reforms are included in the draft bill, GOP leaders may be trying to ensure the defeat of their own amnesty bill, just to give the discharge-amnesty advocates a talking point for their own election campaigns, said one source.

That talking-point strategy is a poor substitute for the political deadlock engineered in February by Senate Majority leader Mitch McConnell, said the source. McConnell directed the debate and defeat of four bills, so allowing GOP members to please voters by voting against amnesty and also to please their donors by voting for more cheap labor, the source said. But McConnell also managed to get several red-state Democrats to vote for an amnesty in their own election year, the source said.

So far, Ryan is not on track to deliver a GOP-boosting deadlock, the source said.

The discharge push for an amnesty is politically risky, admits California Rep. Jeff Denham, a leader of the 23-plus member discharge group, told the New York Times:

In 2016, Denham survived a strong Democratic challenger because he got a 14,300-vote turnout-boost from Trump’s campaign.

Another leader in the minority discharge group, Florida GOP Rep. Carlos Curbelo, told the Washington Post that immigration policy should serve the interests of business groups, not of Americans. “The party should stand for an immigration system that complements our economy,” he said.

But the media-magnified minority group is promising to split the party to win an amnesty. Fox News reported:

“We have a drop-dead date of next Tuesday,” said one House immigration discharge petition advocate. “June 11 comes and we’re going.”

The amnesty-discharge Republicans include several members from districts which now have a large share of Democrat-voting Latinos who were imported by the agriculture industry and were made citizens by prior amnesties in 1986, 1990 and 1996. The group also includes several GOP members who represent agricultural districts which rely on cheap guest-workers to run low-technology dairy farms. The farmers have not used recent high milk-prices to buy labor-saving machinery, and their legislators have not even asked Congress for federal aid to buy the American-made robotic machinery.

Amnesty advocates use business-funded pollsters to conduct “Nation of Immigrants” push-polls to show apparent voter support for DACA amnesty, for immigration, and immigrants. Those pollsters also push their clients’ preferences when they advise their political clients.

But “Choice” polls reveal most voters’ often-ignored strong preference that CEOs should hire Americans at decent wages before hiring migrants. Those pro-American preferences are held by many blue-collar Blacks, Latinos, and by people who hide their opinions from pollsters.