House Speaker Paul Ryan said Thursday he hopes to quickly write up an amnesty bill and get it passed through the House.

“The next step is putting pen to paper so we can start getting legislation to the floor,” Ryan told reporters shortly after he held a Thursday-morning meeting with the GOP caucus to push for a wage-cutting amnesty.

Ryan suggested he would try to rush the bill to the floor. “Time is of the essence if we want to have a legislative process that we can control,” he said, referring to the group of 23 GOP legislators who threaten to use the discharge-petition process on June 25 to let Democrats pass their own amnesty.

The bill would reportedly provide an amnesty to at least 1.4 million illegals, and it does not include a cap to prevent fraud or subsequent waves of migrants hoping to join the next amnesty.

CNN reported mid-afternoon that Ryan’s legislation could be drafted “in the next few days.” The claim was made by Florida Rep. Chris Curbelo, a leader in the discharge-petition group whose district is dominated by Democratic-voting immigrant families who were brought into the United States by earlier amnesties.

New 🚨: Curbelo tells me House leadership should have a draft of a DACA compromise in the next few days:
“The next two or three days will be decisive in terms of whether or not people keep their word and support this framework” that has been negotiated, he said.

Wrapping up #ImmigrationReform @HouseGOP meeting. I don’t think it could have gone any better. Some questions but a lot of consensus. Our country deserves meaningful action on #immigration now. For too long politicians have used this issue for personal political gain. Enough.

Ryan has used the threats from Curbelo and his discharge-amnesty group to push mainstream GOP legislators to support a pre-election amnesty vote. Ryan has the political power to shut down the amnesty-petition drive, partly by denying campaign funding to the 23 GOP members who have signed the petition. He also has the legal authority to ensure the House will not be in session during the only two days the amnesty-discharge people can hold their vote.

Ryan is also aided by threats from cheap-labor business groups who stand to lose billions of dollars because of rising wages in Trump’s no-amnesty economy.

These business groups, including the U.S. Chamber of Commerce, are claiming that investors are suffering from a labor shortage. But the 2017 tax cut and record corporate profits do give them the resources to offer higher wages to encourage people to rejoin the workforce or to switch from lower-paying jobs.

Ryan has a history of supporting cheap-labor amnesties and large-scale immigration in California and other states, although this week he praised the recent wage increases. Those rising wages are helping raise Trump’s political ratings and the GOP’s generic-ballot score before the November election. But the wage raises likely will stall before the election if the federal government passes an amnesty that adds at least two million workers to the labor supply.

Amid Ryan’s rush to the floor, populist-minded GOP legislators denied there is amnesty deal.

.@RepMarkMeadows : “There is no tentative deal. There is no deal.” On immigration between HFC and moderates.

Throughout the closed meeting and the subsequent press conference, Ryan presented his amnesty as his implementation of President Donald Trump’s four-pillars immigration reform legislation, outlined at the State of the Union speech.

However, Ryan’s still-vague bill would raise the supply of blue-collar and white-collar labor.

That features marks a huge difference from Trump’s plan, which would reduce legal immigration by winding down chain-migration over ten years, and by ending the diversity visa-lottery. In his inauguration speech, Trump also promised a “Hire American” policy, not a Ryan-style hire-an-cheaper-immigrant policy. 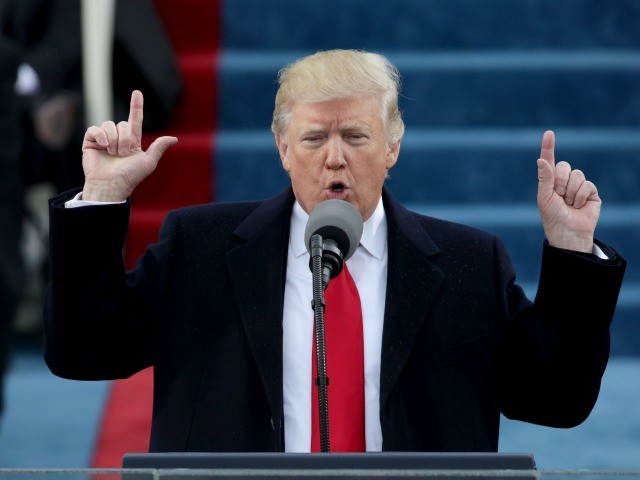 Naturally, Trump’s promised reduction in legal immigration is strongly opposed by business groups because it would nudge up white-collar and blue-collar wages.

Ryan’s emerging bill reportedly would not allow any significant reduction to the immigration flow. It would reduce some chain-migration categories and end the visa lottery — but would just shift those visas to the “Employer-Based Green Card” categories.

That shift would greatly raise the inflow of foreign professionals who will compete with American college-graduates for upward white-collar jobs while modestly reducing the inflow of lower-skilled family migrants who compete for blue-collar jobs.

Immigration-boosted competition for jobs cuts Americans’ salaries and wages, so raising profits for CEOs and investors, according to the 2016 report on immigration by the National Academies of Science.

“The House plan is so bad it is not worth supporting,” said Rosemary Jenks, policy director at the influential NumbersUSA advocacy group. “It is not going to reduce immigration – they will just find a way to reallocate the visas, and we are going to oppose it for that reasons alone,” she told Breitbart News.

The plan will also put GOP legislators on the record supporting amnesty before an election, she said, adding:

Ryan said he is working with the administration to develop the plan, but did not explain how he is changing Trump’s four-pillar plan.

Ryan presented the four pillars as a starting point and said that if there’s a resolution it might be a week or so before legislative text is ready to be unveiled, White House Legislative Affairs Director Marc Short told reporters after he left the meeting.”

Short is a former top deputy to the pro-amnesty, cheap-labor advocacy group organized by the Koch brothers. In February, Short played a minimal role in push the President’s four-pillar priorities during the Senate’s organized collision that allow Senators to block any reforms, while also voting multiple times to please their donors and their voters.

Ryan offered few details about the amnesty bill during his morning meeting.

What I am hearing so far on this House R immigration meeting from lawmakers:

– this is a 30,000 ft level meeting
-Speakership talked Trump’s 4 pillars at the top, as well as how they don’t like the discharge petition
-pathway to citizenship seems to be the biggest sticking point

From source in the GOP Immigration meeting. Says Ryan said the pt isn’t to force the issue at this time but to head off the discharge petition. Ryan says there is no leadership plan, per se. It’s a result of mtgs w/moderates/Freedom Caucus

Here’s what the moderates offered at today’s meeting per source familiar pic.twitter.com/4riLcuwlSb

Homeland Security Chairman Michael McCaul said he viewed the conversation as “a green light from the conference” to move forward with talks surrounding Trump’s four pillars.