Thilo Sarrazin has vaulted into the headlines in Germany and the rest of Europe over the last few weeks. He was already controversial due to his publicly expressed views on Muslim immigration, but his recently-published book has brought down the wrath of the German establishment upon his head. The SPD (Social Democrat Party) has voted to expel him, and yesterday he was fired from the board of the Bundesbank. 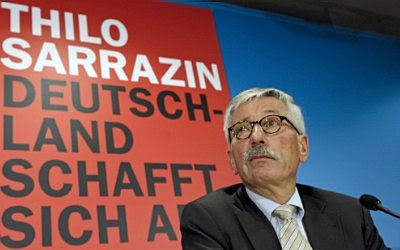 The video below is a subtitled version of a German television documentary on Mr. Sarrazin. Polite German society has closed ranks against him. This program is an obvious hit piece, giving prominent progressives an opportunity to condemn his “racism” and “xenophobia” as they compare him to the Nazis. Even so, the “Islamophobe” is allowed to make his case in his own words:

A complete transcript of the video may be found at the bottom of this post.

Despite the vitriol aimed at Mr. Sarrazin, his message seems to resonate strongly with ordinary Germans. As the Wall Street Journal reports:

The German government’s effort to oust a senior Bundesbank official for publishing controversial racial theories isn’t going at all well.

A day after the German central bank asked President Christian Wulff to dismiss the official for racially charged remarks, it was becoming evident that a sizable slice of the electorate share Sarrazin’s concerns over immigration and ethnic integration and were protesting preparations to expel the 65-year-old from the central bank. Informal TV polls suggest that nine in 10 call-ins say Sarrazin might have a point or two.

Thilo Sarrazin hasn’t been silenced by all the shunning and condemnation. He recently wrote an article for the German newspaper BILD summarizing his conclusions about the effect on Germany of prolonged Muslim immigration. Our Flemish correspondent VH — working with a Dutch translation that was posted at the ICLA website — collaborated with JLH to produce the following English-language version of Thilo Sarrazin’s piece:

If I want to hear the muezzin, I also can book a vacation to the Orient

In the German media this is frequently concealed. Immigration issues are often treated with a raised admonitory finger, and an attitude that probably can be the best characterized with the slogan: “Peep, peep, peep! We all just love each other.” This approach is as unhistorical as it is silly. Even more regrettable is that the German political elite lets its position on immigration be determined largely by the voices from the media. It thus runs the risk of alienating itself both from the people and the core of the problem.

The growing influx, noted by right-wing populist movements in many European countries — also the referendum on the acceptance of minarets, as held in Switzerland — are consequences of the predominantly unhistorical, naïve and opportunistic migration policy of European governments.

In all countries concerned — whether Britain, France, Germany, the Netherlands, Belgium, Denmark or Norway — one makes similar observations about the group of Muslim migrants, namely:

* Spatial segregation with a tendency towards the emergence of parallel societies;

* Above-average religiosity with growing penchant for traditional and fundamentalist movements in Islam;

* An above-average criminality, from “ordinary” violent street crimes to participating in terrorist activities.

In Germany, an army of integration committees, Islam researchers, sociologists, political scientists, organizational representatives and a group of naive politicians work intensively, hand in hand, on trivialization, self-deception and denial of the problem.

It is particularly popular to blame the critics of Islam for a lack of tolerance. Thereby an important distinction is lost: One can, indeed must be liberal towards beliefs and lifestyles that differ from our own. But this liberality then may not be applied to those who do not want to tolerate different beliefs and lifestyles.

The 18-year-old murderer Ayham Sürücü — who in February 2005 in Berlin, commissioned by his deeply religious Turkish-Kurdish family-in-law, shot dead his sister Hatun Sürücü, five years his senior, because she had a different lifestyle — was deeply religious, and a representative of a broadly shared view among Muslims. Can someone who judges this kind of religion to be unworthy — even if it does not lead to murder — be described as illiberal?

That the strong growth of the Muslim minority in Europe is causing concern certainly need not be construed as xenophobia. Below-average employment among Muslim immigrants in Germany can be established. Only 33.9 percent of them earn a living through professional and other gainful employment. In the population without an immigration background, that is 43 percent.

It is often noted that many Muslim immigrants are especially likely to be self-employed. There are approximately 80,000 self-employed persons in Germany with a Turkish immigration background, of which 40,000 are in food retailing.

At any rate, the percentage of self employed persons among Muslim immigrants is significantly lower than that of the German population and other immigrant groups — in 2007 only 6.8 percent, compared with immigrants from EU countries (12.4 percent), Southeast Asia (13.9 percent) and persons without an immigration background (10.4 percent).

Compared to the working population, there are among Muslims four times as many people living on unemployment benefits and welfare assistance than among the German population. The situation is completely different among the migrants from the EU Member States. Their employment rate is 44.2 percent, which is even slightly higher than that of native Germans.

Of the people living in Germany with a Muslim immigration background, 30 percent have no school diploma whatsoever, and only 14 percent a Higher School Certificate.

It is noteworthy that the immigrants from the EU and South- and East Asia do not have similar problems. Of the children of the Vietnamese contract workers of the former East Germany 80 percent even have a Higher School Certificate, a higher percentage than the Germans.

Discrimination as a cause for this lack of success of the Muslim immigrants can be excluded, as groups of migrants from the Far East or India, whose appearance is even more exotic than that of the Turks and Arabs, in some cases even surpass the Germans.

The relative failure can also hardly be attributed to congenital capacities and talents, as it concerns Muslim immigrants of various origins. It also is a mystery why the progress in the second and third generations, if there is any, is much less with the Muslim immigrants than with others.

Some Germans — including the elite — have not yet even noticed the problem. In their life, domestic, and working environments Muslim immigrants at the most are encountered as cleaners or as an exotic backdrop for a rare visit to Berlin-Kreuzberg [culturally enriched neighborhood in Berlin]. Certain portions of the intelligentsia and the liberal press seem even to quietly gloat about Muslim immigration undermining German society.

What did the U.S. government do for the integration of German, Jewish, Irish and Italian immigrants? They integrated themselves, because they had no other choice if they wanted to survive. There was no public support for importing brides. The failure of integration in Germany is due to the attitude of the Muslim immigrants.

I would like my great grandchildren 100 years from now still to be able to live in Germany — if they want to. I do not desire that the land of my grandchildren and great-grandchildren be largely Muslim, that Turkish and Arabic be spoken in broad swathes, that women should wear headscarves, and the daily rhythm be determined by the prayer call of the muezzin. If I want to experience that, I can book a vacation to the Orient.

I do not want us to become strangers in our own country.