Muammar Gaddafi’s forces bombarded Benghazi, the stronghold of Libya’s opposition, on Wednesday, and spread leaflets around the city suggesting to residents that they give up the fight against Gaddafi now, according to Reuters. 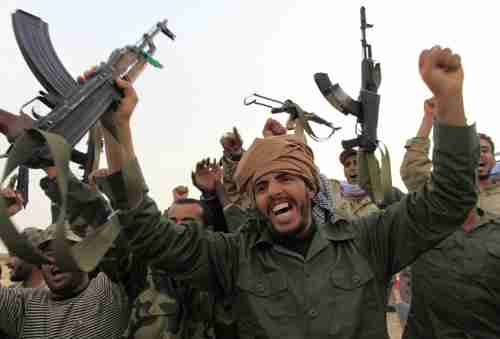 In an interview with Reuters, Saif al-Islam Gaddafi said, “The military operations are finished. In 48 hours everything will be over. Our forces are close to Benghazi. Whatever decision is taken [with respect to the no-fly zone], it will be too late.”

The prospect of a Gaddafi victory is causing some tempers to fray, because no decision is being reached on instituting a no-fly zone over Libya.

Both BBC and al-Jazeera have been running interviews with people of Benghazi begging for help. A typical interview, usually of a young woman, goes something like, “Please don’t forget us. We just want our freedom like everyone else. Please give us a no-fly zone so that Gaddafi can’t kill us.”

In the European Parliament on Wednesday, some MEPs have been expressing disgust. AFP quotes ex-premier Guy Verhofstadt:

“There are thousands of heroes. We know who they are but Gaddafi knows as well. He knows their names and their families. If he takes Benghazi it will be nothing more than a massacre, a new Srebrenica, a new Rwanda, a new Darfur.

This makes me sick of the EU. We have learnt nothing at all from history. When Gaddafi is back shall we say business as usual? Are we going to close our eyes again? Will we add one black page more to European history?

I count on France, on Britain, on the US to take action — not on the EU!”

This shows how the no-fly zone question is much more emotional in Europe than in the U.S., where most Americans couldn’t find Libya on a map, or tell you what continent it’s on. Europeans are still torn over WW II issues, with some younger Europeans often expressing xenophobia towards Muslims, and some older Europeans fearing that the lessons of the Holocaust have been forgotten.

Indeed, France and Britain have been the main proponents of military intervention with a no-fly zone. The Obama administration has not taken a position either way, something that’s drawn accusations of dithering.

An analysis by the Guardian lists the major players in each camp:

The reluctance of the Obama administration to support a no-fly zone would seem to kill the idea, but the possibility of a rebel rout is causing a striking shift in tone, according to an analysis by the NY Times.

According to the article, administration officials are now moving toward the following policy:

The article quotes Secretary of State Hillary Clinton as responding to a question about why the administration was changing policy. “The turning point was really the Arab League statement on Saturday. That was an extraordinary statement in which the Arab League asked for Security Council action against one of its own members.”

What Clinton didn’t mention was that the Arab League statement was essentially contradictory, since it demanded a no-fly zone, but also demanded no foreign intervention in Libya. (See “13-Mar-11 News — Arab League unanimously requests a no-fly zone over Libya.”)

Still, from the point of view of Generational Dynamics, we’re in a generational Crisis era, and we seem to be rushing headlong into a true, major crisis.