In the White House’s latest efforts at transparency, the administration announced to reporters that it would brief reporters on the latest shocking developments about the Benghazi situation … behind closed doors. Politico reports that the meeting started at approximately 12:45 PM ET, and that it moved the normal press briefing to 1:45 PM ET. Jay Carney, White House press secretary, did not comment on whether the meeting took place.

The off-the-record session was announced to reporters in the wake of an ABC News report showing that White House and State Dept. officials were involved in revising the now-discredited CIA talking points about the attack on Benghazi.

The administration routinely exerts pressure on reporters it feels are not kind enough in their coverage. Reporters like Cheryl Attkisson of CBS News have felt the hand of their bosses for “wading dangerously close to advocacy” with regard to Benghazi. No doubt this “off-the-record” meeting was designed to get all the president’s horses and all the president’s men to put the Benghazi humpty dumpty together again.

UPDATE: Reporters not invited to the off-the-record briefing are reportedly incredibly unhappy about it:

UPDATE II: Jake Tapper of CNN reports that the regularly scheduled press briefing has been delayed even further: 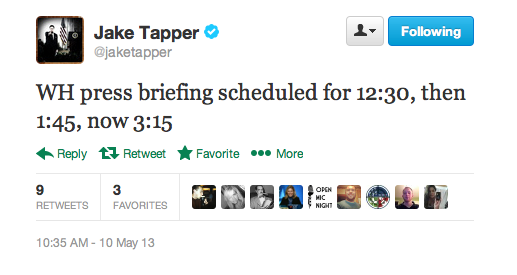 UPDATE III: Politico now reports that the meeting has been characterized as “deep background.” The existence of the meeting itself is considered “off-the-record.” White House spokesman Josh Earnest said, “Deep background means that the info presented by the briefers can be used in reporting but the briefers can’t be quoted.” So expect a fair number of “White House sources” to appear in reportage for the next few days.

UPDATE IV: Jay Carney began his on-the-record press briefing by announcing that 14 news organizations were invited to the closed door briefing, but that it was not a substitute for the on-the-record briefing. He then announced that it was “erroneous” to describe the briefing as “off-the-record,” and instead suggested it was “deep background.”