Saudis prepare for MERS and Ebola at Hajj 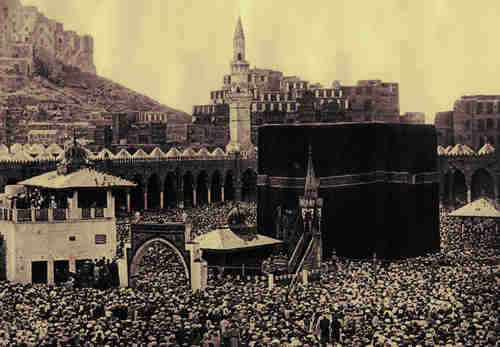 Saudis are preparing for a double-dose of danger at this year’s Hajjon October 2-7, when millions of Muslims from around the world arrivefor their once in a lifetime pilgrimage to Mecca, Saudi Arabia. Hajjpilgrims will be asked to wear face masks this year to reduce therisks of spreading MERS-CoV (the Middle Eastern Respiratory Syndromecoronavirus) or Ebola.

Both diseases have an incubation period of about 2-20 days, meaningthat someone could be sick and spreading the disease for severaldays without showing symptoms. Both diseases are spread byphysical contact, with airborne contamination rare though notimpossible. Health care workers are often the most vulnerable,since they become contaminated while treating infected patients.

The Saudi Ministry of Health last month banned Hajj visas for SierraLeone, Guinea, and Liberia — the three nations most affected by Ebolathis year with at least 5,800 cases. Nigeria, a country with one ofthe highest concentration of Hajj pilgrims in the world, was left outof the ban, because the 20 Ebola cases have all been isolated.Pilgrims arriving at the airport near Mecca are being screened by thehealth ministry. Vox and The Health Site and BBC

Speaking to the United Nations General Assembly on Saturday, CentralAfrican Republic president Catherine Samba-Panza asked the UnitedNations to modify its imposed arms embargo to permit the CAR army tohave weapons, so that the army will be able help theU.N. peacekeepers.

In December, the Security Council imposed an arms embargo on theCentral African Republic and the African Union sent a peacekeepingmission, now at 6,000 troops, to attempt to quell the spreadingviolence. The United Nations took over the AU peacekeeping missionlast week, and plans to double the force to 12,000 troops.

The violence originally began in the capital city Bangui, buthas been spreading to towns and villages across the country.Thousands of people have been killed, and rapes and mutilationshave been reported frequently. The conflict has uprootedor affected millions of people.

The World Health Organization (WHO) has categorized CAR’s healthcrisis as “Grade 3” – its highest level. The country’s healthinfrastructure has broken down, with 50-75% of the healthfacilities no longer able to offer basic services.

However, a generational crisis war is a force of nature, and cannot bestopped by a few peacekeeping forces any more than a tsunami can be stopped bya bucket brigade. Many of the villages across the vast country arefar out of reach of a few thousand peacekeepers, and the people inthese villages have little motivation to stop fighting, when they canget revenge killings by the other side in other villages.

My guess is that it’s unlikely that the United Nations will vote toend the arms embargo, since it’s pretty clear that any weaponsentering CAR for any reason will, sooner or later, be used by eitherthe Seleka or anti-balaka militias to further the slaughter. Reuters and World Health Organization (WHO)