French authorities have ruled out terrorism as a motive for the van attack, despite reports the driver shouted “Allahu akbar” as he piloted the white Fiat van into crowds of people doing last minute Christmas shopping. Hours later police arrested a man reportedly “armed to the teeth” on Tuesday morning.

Despite the similarities to an almost identical motor-attack that occurred less than 24-hours before in the French city of Dijon, the local prosecutor speaking in the wake of this latest event said “We cannot speak of a terrorist act”, saying evidence suggests it was an “isolated case”.

British newspaper The Times reports a number of reliable sources, including a police officer, witnessed the driver of the white van attack in Nantes shouting “Allahu akbar” as he drove into people. The phrase is Arabic and translates as ‘God is Great’.

It is reported the ram-attack specifically targeted a chalet serving mulled wine. After his vehicle came to a rest and he had injured eleven bystanders, five seriously, the driver began to stab himself repeatedly in an apparent, unsuccessful, suicide bid. He is now in police custody. 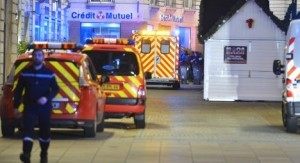 The two motor attacks followed a knife attack in a French police station, which left one officer fighting for his life. A French-Burundian Muslim convert reportedly walked into the station on Saturday and shouted the now familiar phrase “Allahu akbar” as he started his attack. He was shot dead after injuring three.

In all cases the French authorities have described the attackers as “unbalanced” and denied the attacks are in any way related.

The situation further developed in France this morning as another arrest was made after a heavily armed man was seen walking in the historic city of Cannes. The man, who was in his 40’s, is described as having been carrying two fully loaded pump-action shotguns, wearing an ammunition belt, and a large knife. No more is known at this time.