The Middle East Media Research Institute (MEMRI) produced a photo gallery of the Islamic State’s church vandalism, reprinted by the UK’s Daily Mail.  The photos show “ISIS terrorists toppling crosses, smashing Christian relics with hammers, and erecting the black flag of ISIS on churches in Iraq.”  Collecting the images wasn’t difficult — ISIS has been triumphantly posting them on its Twitter network. 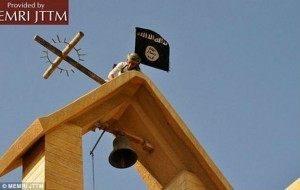 As the Daily Mail explains, ISIS believes “ancient relics promote idolatry that violates their fundamentalist interpretation of Islamic law.”  This has the useful (for them) side effect of allowing them to obliterate cultural resistance through genocide and vandalism.  The Vatican’s representative at the U.N., Archbishop Silvano Tomasi, accused the Islamic State of perpetrating genocide just yesterday, as part of a rare Vatican endorsement of military force.

Among the targets of ISIS’ history-erasing rampage have been the 3,000-year-old winged statues of the Assyrian city of Nimrud, the 2,000-year-old historical site at Hatra, and the Mosul Central Library, where thousands of books have been destroyed.

Fox News quotes Irina Bokova, head of the U.N. Educational, Scientific, and Cultural Organization: “We cannot remain silent.  The deliberate destruction of cultural heritage constitutes a war crime. I call on all political and religious leaders in the region to stand up and remind everyone that there is absolutely no political or religious justification for the destruction of humanity’s cultural heritage.”

ISIS is “burning everything: human beings, stones, and civilization,”Louis Sako, patriarch of the Chaldean Catholic church said.  He pleaded for humanitarian relief first and foremost, calling the Islamic State’s depredations “obviously a human catastrophe that cannot suffer any silence.”

The Fox report says that some transportable artifacts may have been stolen and sold on the black market. The damage to sites like Nimrud is extensive and irreparable — workmanship that lasted thirty centuries wiped out by dedicated Muslims with sledgehammers and dynamite.